How Paul points the way to a fresh way of seeing faith.
Julie Canlis 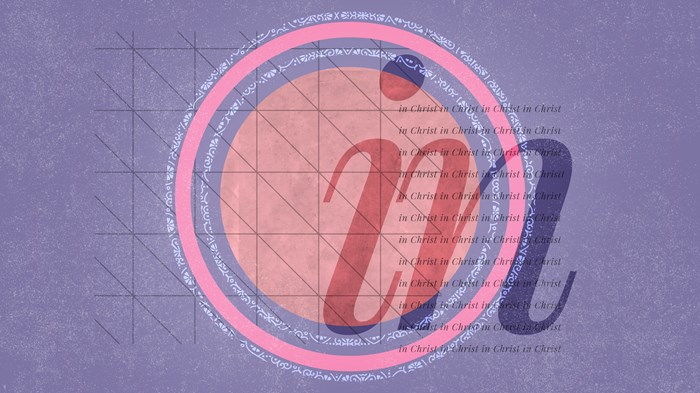 Years ago during graduate studies at Regent College, I had a desperate talk with Eugene Peterson about how my PhD had turned the words of God into a great, big research project. I was trying to read my lifeless Bible, but I was interrupted 1,000 times by children needing to be fed, changed, read to, and more. I begged him to give me a spiritual discipline, some rope to haul me out of the hole I was in.

“Well, Julie,” he said, “is there anything you are doing in a disciplined manner already?”

I thought about my newborn daughter, Iona, and the hours that I spent nailed to our couch feeding her. She had reflux, and most of what went into her immediately came up again, which meant that I had to repeat the feed all over again. “Nursing Iona is the only thing I can count on,” I said. “She makes sure of that.”

He patted my hand, then, like a parent consoling a dissatisfied child who is not content with their lot in life. “Julie, that is your spiritual discipline. Now start paying attention to what you are already doing. Be present.”

In that moment and so many others like it, I was weakened by a very common and insidious temptation: I wanted to be for Christ instead of being in Christ. I saw my familial responsibilities as obstacles to a godly life when in fact they were the very place he wanted to meet me. Accordingly, I had to radically revise my view of obedience to include the simple act of abiding in Christ.

This idea of being “in Christ” is arguably one of the most potent—and perplexing—aspects of Paul’s letters.

When I first began to study Paul, I glossed over this description and assumed it was just another way of talking about what Jesus did for me on the Cross. But the more I read Scripture, the more I realized that Paul was actually talking about being joined to Jesus. As John Calvin writes, “But we do not regard Christ as outside of and distant from us, in such a way that His righteousness is imputed to us in mechanical fashion, but we put Him on and are made members of His body, and He has deemed us worthy to be united with him.”

According to Calvin, to be saved by Christ means to be included in the person of Christ.

For me, this was a Damascus Road revelation. The scales fell from my eyes. This idea didn’t contradict anything I had learned about Scripture, but it made so much more sense of commands that I obeyed but didn’t really understand—like getting baptized, going to church, taking Communion.

Paul, too, is hit with the same truth of being “in Christ” when he encounters Jesus on the road to Damascus. Saul is breathing down the necks of Christians, ready to arrest them, when at the gates to Damascus he is blinded by a flash of light. He falls to the ground and hears a voice saying, “Saul, Saul. Why are you persecuting me?” Saul asks, “Who are you?” And the voice says, “I am Jesus.”

The voice doesn’t ask, “Why are you persecuting my people?” Instead it explains that Saul’s actions against Christians are directly hurting Jesus himself, whom Saul had never seen, touched, or hurt. This dramatic Damascus Road experience revealed not only Jesus but, perhaps more importantly, the ongoing connection that Jesus had with his followers.

This conviction grew and grew over Paul’s life. His letters are overflowing with references to “union with Christ.” In the introduction to his translation of the New Testament, the Bible scholar J. B. Phillips writes of Paul and other New Testament writers,

To these men it is quite plainly the invasion of their lives by a new quality of life altogether. They do not hesitate to describe this as Christ “living in” them. ... We are practically driven to accept their own explanation, which is that their little human lives had, [in] Christ, been linked up with the very life of God. … These early Christians were on fire with the conviction that they had become, [in] Christ, literally sons of God; they were pioneers of a new humanity, founders of a new Kingdom.

In this kingdom context, here is how union works: Paul believes that we are united to Jesus’ descent and his ascent.

First, Christ joined himself to us in the Incarnation. This union is not subjectively experienced by us but is an objective, cosmic miracle of God uniting himself to our humanity. This extraordinary event doesn’t get activated by our faith or by praying a prayer. Rather, it has already happened—it just is.

The second part of the mystery is even greater: Jesus has thrown open his history to us. This is the subjective, personal part that we are invited to step into. The Spirit says to each one of us, “Okay, who’s in?” Then we are ushered into the Spirit’s primary work in the universe—to put all things into Christ and to be joined to him.

Together, these two unions are the huge, creation-encompassing ideas that we find in Paul’s letters. When we say, “I have been crucified with Christ and I no longer live, but Christ lives in me” (Gal 2:20), it is not a mindfulness technique or a positive-thinking exercise. This is our new reality. Our job is to wake up to it. All of the big theological words—justification, sanctification—now make sense in this orbit of being “in Christ.”

So how do we enter all of this? How do we abide in Christ?

First, the church is the context for our union with Jesus.

The church is not merely a building or a community of people—it exists in union with Christ, and union with Christ means that you can’t say “Jesus, yes. Church, no.” When you are united to Christ, you are put into a family. There are no “only children” in the kingdom.

Growing up, I, like most children at the time, had to go to church. I am eternally grateful to my parents for not making this an option, because as a child, I didn’t know that church is like being in a family—you can’t opt out. If you opt out of family, you grow up not knowing yourself. You have to learn the family dynamics, go to the family reunions, eat the traditional family foods, and endure some of the family craziness.

In the early church, people were so convinced that the church was a living reality of those united to Christ that unbaptized persons were not allowed to enter. They were given permission to watch, sing, and pray in the large entryway, but they could not walk into the space unless they had been united with Christ through baptism.

Second, if the church is the primary context for abiding in Christ, then baptism in the church enacts our union with him. Paul says that “if we have been united with him in a death like his, we will certainly also be united with him in a resurrection like his” (Rom. 6). In baptism, we experience the gospel in water. We physically declare that we are dying to all attempts to “be ourselves” apart from Christ and instead are raised to new life in him.

Finally, the Lord’s Supper nurtures our union with Christ.

If union is God’s embrace of us, then Communion is our throwing ourselves into the arms of his loving embrace. In Communion, we are eating the good news of our connection with Christ. As Paul writes, “Is not the cup of thanksgiving for which we give thanks a participation in the blood of Christ? And is not the bread that we break a participation in the body of Christ?” (1 Cor. 10:16).

Doing something “for Christ” is a very different action than being “in Christ” and although both bear important fruit for the kingdom, for most of us, being in Christ poses the greater challenge.

Julie Canlis is the author of A Theology of the Ordinary (2017) and Calvin’s Ladder (2012), winner of a Templeton Prize and a Christianity Today Award of Merit. She collaborated with her husband, Matt, on the documentary Godspeed.

The Bible’s Best Description of Salvation Is a ...