Looking for the right fit in a spouse is often less important than praying for the Spirit’s blessing.
Lore Ferguson Wilbert 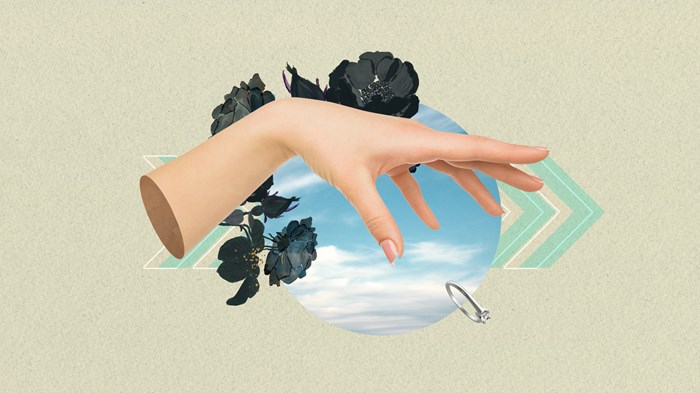 I gave the ring back on a warm night in November. My boyfriend and I had just returned from a weekend of camping with friends. I can’t remember what started our fight that night, but it had been simmering for a while. “Sometimes I think the only reason you want to marry me is because he didn’t want you,” my fiancé said. I wanted to hate him for those words, but the truth was, he was right. My interest in another man had been unrequited, and in the absence of hope, I let my feet wander and gave myself to someone I sinfully considered second best. After I recognized my selfishness, I gave his engagement ring back.

For months, I carried shame about my failure, especially as we continued our relationship and I tried to sort out my heart. He was an honorable man from a wonderful family, but by February, I knew a wedding was not in our future. I could not find the peace I needed, and the hitch in my spirit was too strong to ignore.

Prior to that engagement, I had spent a lot of time waxing eloquent about the decisiveness of love. I believed strongly that it was a choice. As a single female nearing her mid-30s, I also believed many men in the church saw themselves above that choice and were looking for some elusive “spark” that would never materialize. “Just commit!” I thought and said often. But when I came face to face with my own inability to cross the mountain of commitment in front of me, I also came face to face with my own inadequate counsel. There’s more to marriage than a “spark,” but there’s also more than simple commitment.

Less than a year later, I met the man I would marry. Neither of us felt a “spark,” at least at first, no ah-ha moment of recognizing “the one.” We started out as friends having a conversation over a sink full of dishes (I washed, he dried), then we progressed to a first date, then dating, then engagement and marriage. Now we make the choice to serve, care for, listen to, mutually submit to, and lead one another, and we engage in all the momentary and monotonous deeds of a life together. We are crazy about each another—ask anyone who knows us. But as we look back on our story, we see that somewhere in between the “spark” (which did eventually happen) and the daily work of choice, there was a gentle presence guiding us toward marriage. That presence was the Holy Spirit.

Sadly, his voice often goes unheard in many relationships.

These years later, my husband and I have counseled many couples to break up. Some of them are dating; some are already engaged. As the pastor who married us said nearly every week leading up to our wedding day, “You haven’t said ‘I do,’ until you’ve said ‘I do.’” He was reminding us that marriage is a lifelong commitment to one another, and if there were any hesitations during our engagement, we should pay attention to those hesitations. They could be telling us something.

When we hear of hesitations leading up to marriage, we often think of them as cold feet or fear of commitment. That is certainly the case in some if not many instances. But in other cases, that small check in our spirit is actually the Spirit of God saying, “Wait. Hold on. Pay attention to me. This is not my best for you, or this is not the best time for you.”

Obviously, these decisions require great discernment. Scripture tells us to confirm every word with “two or three witnesses” (2 Cor. 13:1). So a gut feeling needs to be corroborated by the wisdom and input of elders, mentors, and others. We also have to guard against petty reasons. For example, annoyance at a minor, irritating habit is not a healthy justification for breaking an engagement. Nonetheless, when we have well-founded feelings of uncertainty about the future of marriage, we should stop and listen. It might cost the deposit on a venue or caterer, but it won’t cost a lifetime of uncertainty.

If marriage is ultimately a picture of the gospel—Christ’s sacrificial love for his bride—then to glorify God with our bodies in marriage means honoring the Holy Spirit living within them. Before any of us even begin dating, we ought to look less at outward appearance or “fittedness” for marriage and instead ask the Spirit to give us the kind of peace only he can give. That peace brings with it a deep, abiding love.

In Ephesians, Paul talks of marriage by saying, “This is a profound mystery—but I am talking about Christ and the church” (Eph. 5:32). Jesus has no hesitation in his love for his Bride, and his Bride groans in her expectation for him. There is no doubt of their mutual love for one another—and that is what the engagement experience should be like. If it’s not, we should pay heed.

For those who ignored that still, quiet voice during engagement, there is still good news. When we marry, we unite ourselves in covenant to one another, and the Spirit loves to help us honor our word. We can still beg him for assurance and confidence, not in the choice we’ve made, but in our Father’s sovereignty over our marriage. We have not thwarted his goodness or circumvented it. We can confess the sin of ignoring the Spirit and continue in obedience to him. He can make marriage beautiful—even one borne over the threshold of doubt.

In my own story, the Lord was gracious to me in my shame over a broken engagement. My selfishness led me into that commitment, and it was only God’s grace that pulled me out. Even so, I caused severe pain to people I loved. I begged God, if he ever led me into engagement again, to give me perfect peace—the unshakeable kind that could not only comfort my heart but comfort the hearts of everyone I knew.

In the end, it was his grace—not a confidence I conjured up or a “spark” I couldn’t ignore—that led my husband and me to our wedding day. It was by his grace that confident, rejoicing friends and family attended our wedding. And it was by his grace that my fiancé and I, standing at the covenant altar, both felt an unshakeable peace in our hearts from the Spirit who lives within us.

Lore Ferguson Wilbert lives in Flower Mound, Texas, with her husband, Nate. Her book Handle With Care: How Jesus Redeems the Power of Touch in Life and Ministry is releasing in February 2020 from B&H Publishers. Read more of her work at sayable.net or on Twitter.