American families are floundering for support. The church is a great place to start.
Gracy Olmstead 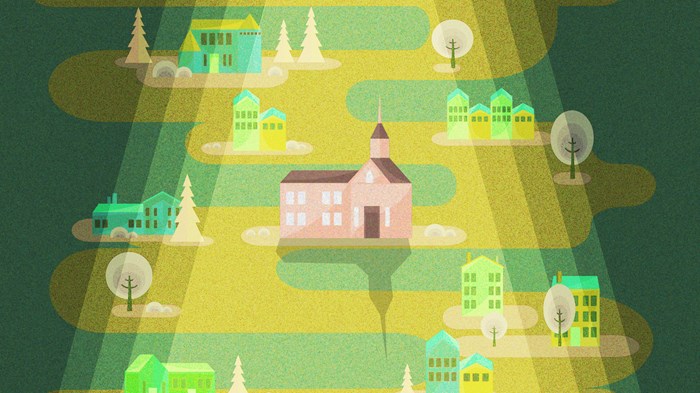 I grew up in rural Idaho as part of a homeschool family with four kids. A lot of our neighbors had big families and most also had stay-at-home moms. In this atmosphere, getting married and having kids were frequent and encouraged practices. More generally, we had an integrated community where singles, kids, parents, and grandparents inhabited a shared world and together laid the foundation for neighborly and familial health. Our “little platoons”—the circles of community that Edmund Burke pointed to as the “first principle” of public life and civic strength—were strong.

This kind of community is increasingly rare. Over the past several decades, America’s birthrate has dropped to concerning levels, and marriage rates have continued to decline. Senator Elizabeth Warren has argued that some of these changes stem from the “two-income trap,” a concept Helen Andrews described succinctly in a New York Times op-ed last week: “When mothers started entering paid employment in large numbers in the 1970s, it led to a bidding war over middle-class amenities that left everyone paying more for the privilege of being no better off than before. The result is a two-tiered system that isn’t working for anybody.”

The cries for egalitarianism during this period led rise to a career-centric economic system that has made childrearing more expensive and stressful for everybody. As a result, the argument goes, we’re all getting hurt in one way or another, either by not having the children we want to have, not pursuing the work-life balance we would like, or not achieving the familial stability that might add value to our lives.

It would appear that the economy we’ve created is at fault for the nation’s baby bust and marriage rates. Because of this economic pressure, Andrews argues in her Times op-ed that we need a woman (or several women) like Phyllis Schlafly to lead a fight for the American family and to advocate for pro-family policies like paid family leave.

However, economist Lyman Stone has suggested that the familial struggles of our time are not just related to monetary hardship. Throughout our nation’s history, people with tenuous financial situations still chose to get married and have a lot of babies. So money doesn’t explain everything. Instead, Stone writes, our culture—and its underlying ideals—most determines people’s childbearing decisions. “Put simply,” he writes, “there is robust empirical evidence that people ‘learn’ fertility ideals from their parents and immediate communities.”

In more traditional societies in the past, childrearing was seen as a “collective project,” one that the entire community helped with. “Even in the United States today, many communities that maintain strong family social norms have this kind of ‘modern village’ parenting style, whether it’s immigrant communities in big cities or Mormons out west,” Stone wrote for the Institute for Family Studies last year. “Unsurprisingly, these groups tend to have higher fertility, perhaps in part because parents, and especially women, have more volunteer help on hand to assist them.”

For the rest of us, what happened to the village model?

In our time, Stone notes, the fabric of community that once supported families and more traditional “fertility ideals” has suffered serious blows. A lot of Americans live farther from family members than they used to. Church attendance is down. Intergenerational community is much less common. According to Tim Carney’s book Alienated America (and Robert Putnam’s classic Bowling Alone), our free associations are fractured, and that fracturing has resulted in increased loneliness and despair in communities across the country. “[F]or most Americans today,” Stone writes, “we have ‘absentee villages’”:

This decline in community doesn’t just hurt two-parent families. I would argue that it hurts single parents even more, and as we see single-parent households on the rise, the decline of multigenerational intentional communities will have a huge impact on their wellbeing.

But this communal component also matters a good deal for the women Helen Andrews describes in her column, the ones who want more children—or more time at home—but find these desires beyond reach.

Stone’s research suggests that, in our time, fewer childless people are helping parents: The supply of volunteer-babysitters is waning, even as childcare becomes increasingly expensive. People are less likely to help the parents around them—either because they’re too busy, too isolated, or too shy to step in and offer assistance. In this context, paying for certain home supports, like childcare or meals, becomes increasingly necessary. And with the growth of those costs, our ability to opt out of the two-income system becomes an increasingly privileged and rare thing. In other words: Parenting without strong and involved villages is more expensive, lonely, and alienating.

These days, many young moms without supportive nearby families, neighbors, church members, or mentors are turning to Facebook groups in an effort to find “villagey” help and encouragement. A friend of mine said she frequently sees young moms posting in the wee hours of the morning, desperate for help as their babies scream or asking for advice as their two-year-olds struggle with behavioral problems. Through social media, we’re attempting to co-opt the little platoons of the past, but in many ways, these platforms fall short.

For one, they are often imperfect replacements for physical presence: the comfort of a warm cup of tea, a supportive smile, an encouraging hug. For another, they cannot meet tangible needs with tangible help—a neighbor who might come over and hold the screaming baby, or a teenager who might watch the needy toddler while mom gets a break.

Part of the solution to this problem lies in public policy, yes. But the other great need, in my opinion, is for us to reestablish robust local villages. While it might seem inadequate to talk about simple, neighborly solutions in the context of a very complex conversation—one that touches on everything from urban layout to workplace flexibility—these actions are key to social stability. And the church is a great starting point.

The local church is a natural place where older parents can connect with younger parents and where the community as a whole can come together to serve families through the generous giving of time and money. While many churches already have ministries to families in their midst—some coordinate meals for those who’ve welcomed a new baby, others have mentoring programs for women who need it—there are additional ways of strengthening the bonds between a church’s associative strength and parents across the socioeconomic spectrum who feel lonely. That might involve providing free or highly discounted daycare to local single parents in need or offering free dinners or babysitting nights on a regular basis.

I’ve also wondered if the church—that’s all of us—could go even deeper by helping to bring back some of the old, bygone social habits that traditionally fostered community. For instance, here in the US and in other countries, people historically practiced the habit of “paying calls,” where at specific times of day people could drop in and visit each other unannounced. Paying calls was not just expected but welcomed, and it served as the foundation of healthy communal life.

However, the whole idea of paying calls was historically tied to a “home economy” that no longer exists. In our society, many families are away from home most of the day—at work or school, at the grocery store or an extracurricular event. As our lives have increasingly become distant from the homes and neighborhoods in which we live, the home has no longer become a place with potential for weeklong openness or hospitality.

The church has the social infrastructure to change that. Many congregations already organize “small groups” that meet on weekdays or weekends, usually in the evening. How hard would it be to encourage at-home parents to have one or more afternoons or evenings a week when their doors are open and fellow church members (as well as neighbors) are invited to drop in for conversation or a play date? Although they might seem insignificant, these types of habituated actions provide the feasting and fellowship that affirm and encourage us and also create the building blocks for a healthy society.

Growing up, my own mother modeled village living on a weekly and sometimes daily basis. A neighbor would often stop by with her multitude of children, and when she did, my mother would welcome her inside, offer tea, send her kids upstairs for toys (and also free childcare—me), and then offer much-needed counsel or encouragement.

Those women weren’t the only ones who benefited from my mother’s hospitality. Each time I watched her practice it, I learned important lessons about neighborliness and love. Several of the kids who came and went through our doors have told me as adults how much it meant to them, too. Each year, I realize anew how important my mom’s open door was—how it fostered Christian hospitality and strong social capital and thus led to the strengthening of young families. These memories from childhood also made me want to be a stay-at-home mom—because they provided me with a vision that was nourishing and good.

Ultimately, supporting families through good political policy is incredibly important, whether through financial policy supports or through generous family leave. But there’s no replacement for the village and its neighborliness or the church and its hospitality. If we’re going to encourage familial health in the future, the local congregation might be the best place to start.

Gracy Olmstead is a journalist and mother based in northern Virginia. She has written for The American Conservative, The Week, Washington Post, and The New York Times. Follow her on Twitter @GracyOlmstead.