I am regularly asked if denominations still matter. Actually, I am asked often why I work for one. And, I answer consistently for the same reason - I think we can do more together than we can alone.

However, denominations are in an important time of rethinking right now. I believe that many denominations, including mine, will look significantly different twenty years from now.

In Breaking the Missional Code, we wrote about denominations: 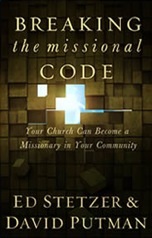 If they exist for more than the (very important) task of sending intentional missionaries, they need to consider how to partner with the churches and their leaders. Lyle Shaller comments, "The denominational systems that were designed to serve the clientele of 1955 and to work in the cultural, social, religious, economic, and demographic context of that era have failed when the unanticipated became the new reality." The old system, Schaller says "collapsed because they were designed to serve a foreseeable set of circumstances." That is what he means by the "new reality." (Breaking the Missional Code, pg. 174)

We suggested that there were four things to consider:

1. How they define the basis for cooperation. Denominations that insist on specific forms of programming and expressions of church will be challenged in the near future. On the other hand, those that define their cooperation around biblical beliefs and missions as a foundation for cooperation will continue to have a bright future.

2. How effective will they be at staying out of the headlines for things that do not matter? Over the past few years, a growing number of churches have chosen not to align with a denomination due to bad publicity in their denomination...

3. How effective are they at developing meaningful partnership with churches, networks, and parachurch organizations? The denominational agencies that learn to "dance" with other organizations can play a significant role in the future, especially if they are willing to bring their resources to the table of other potential significant partners. Networking and partnering is the future. The potential for great synergy is hard to overstate. Those that are going to navigate the transitions of the church must become effective at such partnerships, networks, and relationships.

4. How effective are they at adding value to the mission of the church? Denominations can play a number of key roles to add value to those committed to breaking the code. In short, denominational agencies that catch a vision for local churches and their apostolic ministries have a bright future. Will they have to be reengineered? For the most part, yes, but at the same time, there are several key roles they can play.

Now, Lyle Schaller has some clear advice for denominations.

We suggested that denominations can and should be engaged in a series of activites:

Cast a vision for a new tomorrow. Denominational agencies for the most part have a unique vantage point from which to see the world. Often, those of us who are in the church can be too close to the trees to see the forest. At other times, we are too close to the forest to see the trees. Denominational agencies can serve a vital role in keeping us informed of our progress in regard to reaching the many unreached people living in North America. Someone has to monitor the pulse if we are going to make a difference. Casting vision and informing that vision with real time research is essential to our future.

Conduct relevant research. Few churches are equipped to do the kind of research required to break the code. Sure, some of it is intuitive and other aspects are simply Holy Spirit-led. But how do we begin to see the need and develop a holistic strategy for discipling an entire city or region? Who and where are the hidden people? How do we reach them? If we do not know, where do we begin? What do we do with our new findings? How do we communicate with others coming behind us? Denominational agencies can come alongside these apostolic leaders and ministries and help provide good research.

Help leaders move beyond their own ethnic, economic model or other ghetto...

Denominations can help bridge the gaps, bringing different kinds of leaders together for kingdom impact.

When denominations are focused on churches, churches will network with them and other partnerships for kingdom impact.