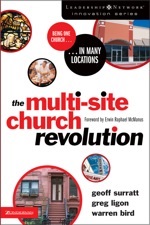 As I wrote yesterday, I recently penned questions and cautions regarding the multi-site movement in my most recent column at Outreach Magazine. (Please read the full article from yesterday before proceeding or the comments won't make much sense.)

Geoff Surratt, who co-wrote The Muiltisite Church Revolution, wrote me a gracious letter in response to the article, kindly differing with some of my conclusions. I asked and received his permission to post it here. Geoff has also agreed to dialog a bit in the comment thread below.

Here is his letter:

I finally got a chance to read your column in the May/June edition of Outreach (I had lost my copy) and wanted to give you some feedback. I am a coauthor of The Multi-site Church Revolution (along with Dr. Warren Bird and Greg Ligon) and the Pastor of Ministries at Seacoast Church, a multi-site church based in Charleston, South Carolina. We met very briefly at a conference in Florida and I have enjoyed your writing for some time. Breaking the Missional Code is a must read for all of our campus pastors.

While I understand that your role in this column is to take the contrarian role, there were several of your arguments that I struggled with. The first was the statement, "Consider the fact that there are few multi-site churches in Europe. Will a great speaker and powerful music appeal to a truly post-Christian culture?" Here are my challenges:

1. You seem to indicate that if European's aren't embracing a multi-site model we should be wary of using it in the US. When Seacoast first began exploring multi-site in 2002 we could find very few models in North America; six year later there are thousands of multi-site churches across America. It is possible that this is a model that will move from the US to Europe and in five years there may be multi-site churches all over Europe.

2. When I had the opportunity to spend some time at Leadership Network's first European Church Planters Leadership Community last spring it seemed that the most successful church planting models all utilized some form of mid-size groups or clusters. Several clusters of small groups would fall under the umbrella of one church. When one church lost their building for two years they continued to grow as they added clusters across the region. When these churches spoke of church planting, what they were actually doing was planting new clusters under the umbrella of one church. This sounds like multi-site done at a micro level and one with huge implications for all multi-site churches reaching out in a post-modern world.

4. As to the appeal of the attractional model in post-modern Europe, I have no idea if it works. I do know that when I visited London last fall Hillsongs London located in the trendy West End was packed with over 1000 20-somethings at their brand new 12:45 service and that their Paris campus was experiencing exploding growth as well. No one is more committed to the attractional model than Hillsongs and I would think that London and Paris are at the epicenter of the post-modernism.

My next challenge was this assertion: "Despite a church's best intentions at new sites, sometimes certain pastoral duties get lost...I know that those duties are supposed to be the job of the campus pastor, but we also know it often does not happen-people come for the show and don't connect with the community."

1. I'm curious to know what your evidence is for this statement; how do we know that pastoral care is not happening in multi-site churches? I would argue that pastoral care is a higher value at our campuses than at a traditional church. Our campus pastors do not spend hours writing weekly homilies to be delivered for 30 minutes on a Sunday and instead focus all of their attention on seeing that the sick are prayed for, watching over the flock, and breaking bread with the beloved.

2. Later in the same paragraph you say, "I hope it keeps you up at night, wrestling with ways to build community in a system that can so easily discourage it." I don't understand how opening multiple, smaller locations with more localized pastoral oversight discourages building community.

3. The statement "come for the show" again seems to be aimed at the attractional model rather than multi-site. Multi-site churches who use video teaching may be categorized as attractional, but I have some questions about that generalization as well. I'll save that for another time as this email is turning into an epistle.

My final challenge is with this statement: "Perhaps my biggest concern with the multi-site paradigm is that it may inadvertently lead to a diminished pool of biblical leaders."

2. We have seen the exact opposite effect since we have opened multiple campuses; rather than a diminished pool of biblical leaders we now have an ocean of biblical leaders. Every site we open creates multiple opportunities for emerging leaders to step up to the plate. I had lunch today with a young man at one of our sites who has been on our youth staff for several years, but now feels a desire to move into a larger role. In a traditional church he would have to leave and plant a church because there would be few if any other opportunities for leadership within our church. Because we are a large, multi-site church we were able to look at a wide range of leadership opportunities from department leader to campus pastor to church planter. He is a biblical leader that is being groomed for big things down the road rather than put out on his own to sink or swim.

3. We have many biblical leaders who do not have the gift of teaching. It is surprising to me that somehow biblical leadership and the ability to stand up and talk for 30 minutes on a Sunday somehow have become equated. It is also surprising that a 30 minute homily is seen as the primary tool to speak into the lives of a congregation. In our campuses our campus pastors lead and teach in dozens of ways every day; the only thing they don't do is teach for 30 minutes most Sundays.

4. We have also found multi-site to be a great way to prepare church planters. Naeem Fazal, who now pastors Mosaic Church in Charlotte, was our first campus pastor. It was a great leadership incubator and Naeem now ministers to almost 1000 20-somethings every weekend. He is one of many biblical leaders who we have had the opportunity to develop through the multi-site ministry.

I apologize for the length of this email but I wanted to share my viewpoint from the frontlines of the multi-site revolution. (Cheap plug for the book) Thanks for lending an ear.

Here is my response to Geoff to kick off the discussion.

As you could tell, Geoff, I mainly wrote about the challenges of multi-site, and I think that in many high profile multi-site churches, I would stand by them. But, I would say that Seacoast, along with North Coast and others, is trying a different way. Do you think you have been able to overcome the challenges inherent in the system?

Or, let me put it this way, at the end of my article I said,

I am not anti-multi-site, but I am anti-consumerism. Church is not about being the best purveyor of religious "goods and services." And if multi-site thrives by appealing to the "come and see" mentality that is so prevalent in American evangelicalism, we will all regret it.

One writer recently wrote about his franchised church--calling it "McChurch--I'm loving it."

I think I will love it more if reproduction is the goal--reproducing believers, ministries, groups and churches. I would love it more if we all worked harder at producing disciples and leaders, and not spectators. And, if you are going multi-site, make sure you stay focused on the mission and its multiplication.

Tell me... how does Seacoast live that?