It's Christmas time, and that means lots of things, but also it leads many to consider how Americans celebrate Christmas.

Here are some excerpts from the study that we just released:

Once it was determined who is celebrating Christmas, the survey turned to how Americans are celebrating. LifeWay Research uncovered a gap, even among Christians, between the religious emphasis of the holiday and the merry, family-focused traditions. 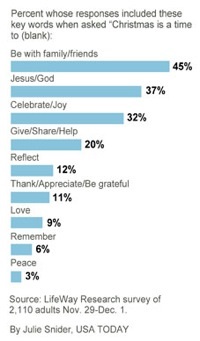 In fact, 81 percent put family first at Christmas, agreeing, strongly or somewhat, with the statement, "Family traditions are the most important part of Christmas to me."

Among a list of 14 things people do at Christmas, giving gifts to family members is the most common activity at 89 percent. Additionally, more than three out of four households report they gather with family or friends for a Christmas meal (86 percent), put up a Christmas tree (80 percent), listen to Christmas music (79 percent), and decorate their homes (77 percent).

Christians are actually among the most likely to enjoy elements of the Christmas season not related to Jesus' birth, with 66 percent saying they watch fictional Christmas movies, as compared to half of agnostics or those with no preference, and less than half of atheists and Americans of other religions.

Though a majority encourage belief in Christ at Christmastime, 67 percent of Americans say that, "Many of the things I enjoy during the Christmas season have nothing to do with the birth of Jesus Christ."

But that's not the whole story. I also think and research also demonstrates that Christmas time is an opportunity. Yes, there is a gap between Christmas participation and biblical information, but it's in that gap that Christians should step and proclaim the story of Jesus Christ.

In the second story that we released I gave some new and old research that points to this reality:

The study also found that one of the ways 47 percent of households celebrate the holiday is by attending special Christmas Eve or Christmas Day church services, which perhaps points to an earlier LifeWay Research study.

In December 2008, LifeWay Research presented respondents with nine seasons or life moments and asked: "Have you been more open to considering matters of faith during any of the following times in your life?" Among the nine occasions tested, "during the Christmas holiday season" earned the highest response with 47 percent of respondents citing that as a time they were more open to considering matters of faith.

"Our research shows that people are open during the Christmas season," said Ed Stetzer, president of LifeWay Research. "When someone says 'Happy Holidays,' I'm not sure the response should be snarling 'Merry Christmas.' Instead, I'd suggest seizing the opportunity the season provides. Christians should be as bold in their witness as some are in protest."

In the 2008 study, LifeWay Research found that 67 percent of Americans say a personal invitation from a church-going family member would be the most effective method a local congregation or faith community could use to invite them to attend. Invitations to attend church from a friend or neighbor are almost as effective, with 63 percent of Americans indicating this variety of invitation would be effective.

This research should be encouraging to the church. Yes, this Christmas season will not be characterized by a clear picture of the incarnation-- at least not in our culture at large. But this season is a beautiful opportunity to reach out to relatives, friends, and neighbors with the gospel as a greater number of them are likely more open to the hope of the gospel than most other times of the year. Head over to USA Today, read the articles (here and here) and come back to the blog to discuss.

Join the conversation on Facebook
Tags:
None
Posted:
December 20, 2010