Love Your Neighbor-- Even the Muslim Ones, An Expanded Version of My Column in USAToday 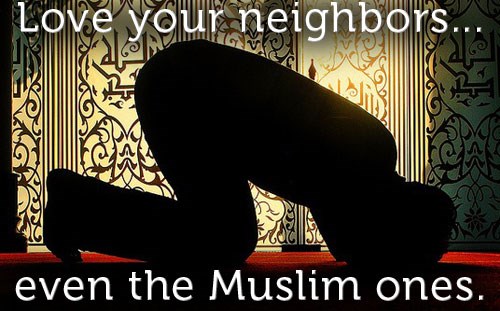 A condensed version of this post first appeared as an opinion column in USAToday. You can read it here. The longer version has some other information that I thought my blog readers would find helpful.

For many Americans, their knowledge of Muslims is what they see on television news rather than what they know from experience. Yet, forming a view of any group based solely on what one sees on the news is a bad idea.

When the Boston Marathon bombing occurred, many Americans were quick to assume it was the work of Muslim extremists, even before it was confirmed. The connection of terrorism to radicalized Islam is no secret. Yet, far too many take it further, leading me to ask, why do some people assume that all, most, or even many Muslims must be terrorists?

In addition, I wondered why so much hate is directed at Muslims today-- the vast majority of whom are peaceful people and, when living here, love their country.

Simply put, too many people make decisions about a group based on what they see on television news--and that's a bad place to make sweeping conclusions.

But this connection happens more than with terrorism and Muslims.

For example, a couple of years ago my young daughter was watching a television news report about a black man charged with a crime -- one of two reports that night. "I don't want to be a racist, but why are so many black people arrested?" she asked. She was contrasting the African Americans she saw on the news with several of our neighbors, who she plays with in our cul-de-sac, who are African-American.

So, on television, she sees young black men going to jail. In our neighborhood, she sees kids just like her whose skin color happens to be different.

The reports of a disproportionate number of young black men being arrested is not what she knows from her own experience and, she now knows after our conversation, it is not representative of the vast majority of African Americans. We widely recognize that people who don't understand this are intellectually lazy.

Yet, this is how many draw their conclusions. This factor involved here is called the availability heuristic, "a mental shortcut when people make judgments about the probability of events by how easy it is to think of examples." Simply put, we make decisions about a group based on the availability of certain "recallable" events that illustrate our beliefs about them.

Since I am neither a Muslim nor an African American, here is another example of the Availability Heuristic that hits closer to home, though it is hardly on the same level.

Obviously, it is racist and inappropriate to consider African Americans criminals because of the disproportionate representation of young black males in crime news reports. This has more to do with what we call a confounding variable of poverty and urban context than it has to do with race. And, I mentioned evangelicals simply because I am one. It impacts all evangelicals when the few fringe leaders are brought to the surface by the mainstream media, and this is what most Americans see.

The same is true of Muslims, Hispanics, Mormons, homosexuals, union members, and any group of people with whom we are not personally familiar. Our lack of personal knowledge and experience, coupled with our unwillingness to learn more, leads us to jump to conclusions that are, more often than not, wrong. We believe it is true because we have seen it on television or read it on the Internet and when we consider the group involved, the available perceptions are those formed from television-- and that's a bad idea. That's where the Availability Heuristic leads many to wrong (though easy to recall) conclusions.

How Christians Should Respond

On the day before the Tsarnaev brothers were identified as Chechen Muslims, I drove by my Muslim neighbor's home on the way out of our neighborhood. His trash can had spilled into the street, so I stopped, picked everything up and put it back on his curb. Why? Because I know him. He is my neighbor. Because our kids play together. And he more realistically represents his religion to me than terrorists do. And my African American neighbors also better represent African Americans than news reports. And, I pray, I am a better representative of my Christian faith than some of the nuts in the news.

Now, I am not naive about the issues involved in Islam and Islamic countries. I have spoken in national publications and before Muslim imams to the fact that there are real issues with how Muslim-dominated countries refuse to allow the right to convert and have not adopted the UN Universal Declaration of Human Rights. So, as an evangelical leader and researcher, I have no vested interest in -- and receive no personal benefit from -- speaking out for my Muslim neighbors and friends. Yet, while it is irresponsible not to see the link between radical Islam and terrorism, it is the height of ignorance to assume that all (or most, or even many) Muslims are terrorists.

We must be careful that we do not fall to the temptation of the Availability Heuristic.

Don't be so lazy to assume that the worst of a group represents the entire group. They hardly ever do. Perhaps a better idea is to meet them, learn about them, and treat them as your neighbor.

You don't like to be stereotyped. Neither do I. So let's not do it to Muslims.

Not all evangelicals are filled with hate, not all African Americans are criminals, and not all Muslims are terrorists. Most are simply our neighbors, and as Christians we have been given a very specific commandment-- a command to love our neighbor.

On the night the news broke that the bombers were Muslim, I saw so many comment on social media in ways that were just unhelpful-- hateful even. I tweeted two things to my fellow Christians who, like me, should desire all to hear the good news of the gospel and trust and follow Christ.

Saddened by anti-Muslim hate spewed by some self-identified Xians online. Jesus told us NOT to respond like the world.

I want ALL to know Jesus-- Muslims too. So, Christians remember: you can't hate a people & reach a people at the same time.

Let's love our neighbors. For that matter, let's love our enemies. And, let's do so because Jesus commanded us to.

Join the conversation on Facebook
Tags:
None
Posted:
April 26, 2013

Love Your Neighbor-- Even the Muslim Ones, An Expanded Version of My Column in USAToday

Love Your Neighbor-- Even the Muslim Ones, An ...