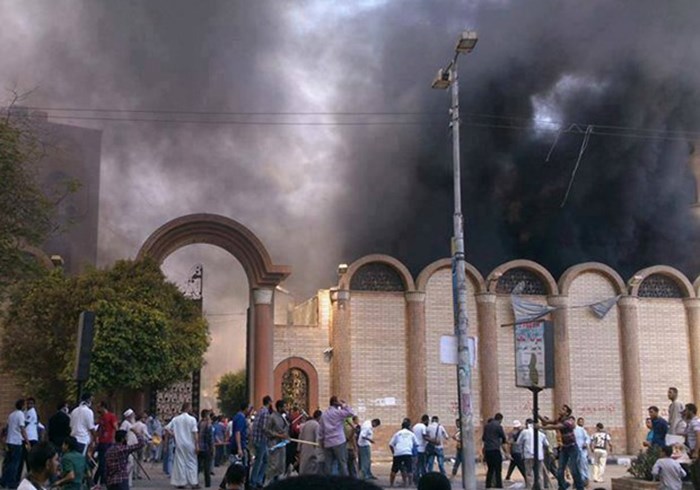 I've been growing frustrated at the media coverage of Egypt, but I am thankful that sources like Christianity Today (and others) are giving more of the story.

Regardless of what you may hear, the fact is that when the Egyptian Army took action against the protestors, radical muslims increased their attacks on Christians. The details are under dispute, but the attacks are clear as is the source. Islamists are, once again, attacking Chrisitans.

SAT 7 CEO and founder Terence Ascott offers an analysis of why evangelical leaders in Egypt disagree with how the evictions have been covered in Western media:

Many of us involved in Christian ministry in Egypt are appalled at the misunderstandings about the situation in Egypt being propagated by even normally balanced international media like the BBC, and the way it has, in general, portrayed the Muslim Brotherhood as the victims of injustice.

So, on behalf of myself, Ramez Atallah (General Secretary for The Bible Society of Egypt), Pastor Fayez Ishaq (part of the leadership team at Kasr El Dubarrah Evangelical Church), other ministry leaders in Egypt and the leadership of Middle East Concern, please allow me to paint a bigger picture of what has been going on the past year or so...

Douthat has a helpful take on the newest Jesus controversy, which is pretty much a repeat of an older one, just given new legs from a viral FoxNews interview clip.

BEFORE "The Da Vinci Code" and "The Gospel of Judas," before Mel Gibson's "Passion" and Martin Scorsese's "Last Temptation," before the Dead Sea Scrolls were unearthed and the Gnostic gospels rediscovered, there was a German scholar named Hermann Samuel Reimarus.

It was Reimarus, writing in the 18th century, who basically invented the modern Jesus wars, by postulating a gulf between the Jesus of history and the Christ of faith. The real Jesus of Nazareth, he argued, was a political revolutionary who died disappointed, and whose disciples invented a resurrection — and with it, a religion — to make sense of his failure.

In Reimarus's lifetime these were dangerous ideas, and his argument was published posthumously. But within a few generations, historical-Jesus controversies inspired publicity rather than persecution. By the Victorian era, when the Earl of Shaftesbury attacked David Friedrich Strauss's "Life of Jesus, Critically Examined" as "the most pestilential book ever vomited out of the jaws of hell," he was just contributing to the book's success.

Today there are enough competing "real Jesuses" that it's hard for a would-be Strauss to find his Shaftesbury. Which is why every reinterpreter of Jesus not named Dan Brown is probably envious of Reza Aslan, the Iranian-born academic and author of "Zealot: The Life and Times of Jesus of Nazareth," who achieved Strauss-style liftoff thanks to10 painful minutes on Fox News.

Those minutes were spent with the interviewer, Lauren Green, asking Aslan to explain why a Muslim would write a book about Jesus — with Aslan coolly emphasizing his credentials and the non-Islamic nature of his argument — and then with Green asking variations on the Muslim question, to increasing offense and diminishing returns.

Timothy George writes on many people's fear of the wrath of God.

Why do many Christians shrink from any thought of the wrath of God? R.P.C. Hanson has said that many preachers today deal with God's wrath the way the Victorians handled sex, treating it as something a bit shameful, embarrassing, and best left in the closet. The result is a less than fully biblical construal of who God is and what he has done, especially in the redemptive mission of Jesus Christ.

Cardinal Joseph Ratzinger, just prior to his election as pope, seems to have had this concern in mind in his 2005 Good Friday meditations. One of his texts was Lamentations 3:1-2, "I am a man sorely afflicted under the rod of his wrath." The future pope applied this prophecy to Christ and his sufferings on the cross, which reveals both the gravity of sin and the seriousness of judgment. "Can it be," asked Ratzinger, "that, despite all of our expressions of consternation in the face of evil and innocent suffering, we are all too prepared to trivialize the mystery of evil? Have we accepted only the gentleness and love of God and quietly set aside the word of judgment? Yet as we contemplate the suffering of the Son, we see more clearly the seriousness of sin, and how it needs to be fully atoned if it is to be overcome."

However we account for the work of Christ on the cross—and none of our atonement theories is adequate to explain fully so profound a reality—it surely means this: that God was in Christ reconciling the world to himself, and that this event involved his purposeful "handing over" and "delivering up" of his Son to a cursed-filled death at the Skull Place outside the gates of Jerusalem (2 Cor. 5:19; Rom. 8:32; Acts 2:23). As the early Christians understood Isaiah 53:4-5, Christ was pierced there for our transgressions, smitten by God and afflicted. But far from being a tragic bystander, Christ made there what the Book of Common Prayer calls "a full, perfect, and sufficient sacrifice, oblation, and satisfaction, for the sins of the whole world." To quote another hymn, not so much in vogue these days, "Bearing shame and scoffing rude/In my place condemned he stood." The full New Testament teaching about the cross involves both expiation, which means providing a covering for sin, and propitiation, which means averting divine judgment. The semantic range of the Greek words hilasmos/hilasterion includes both meanings. That is why the wrath of God cannot be brushed out of the story without remainder.

Recently on The Exchange, Alton Garrison and I discussed research-based discipleship efforts, spirit-empowerment and the differences within the larger Pentecostal movement. Don't forget to join me every Tuesday at 3:00 PM Eastern for The Exchange.