Of Course People Prefer Live Preaching, But Video Venues Work When You Work Them 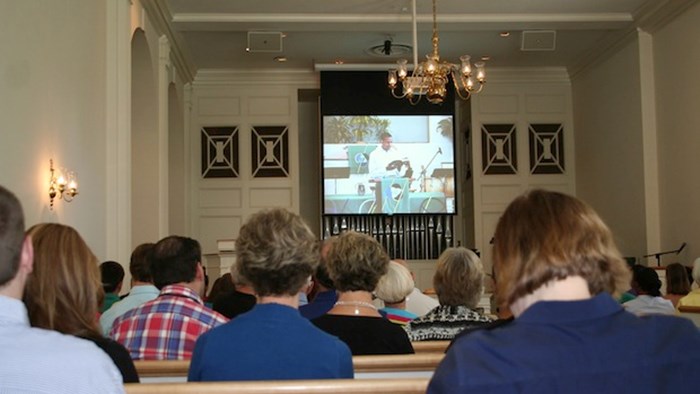 Geoff Surratt and I have debated the issue of video venues before—you can find out dialogue in two parts, here and here. When I suggested three cautiouns about multisite, he responded that they need not be barriers. The end result is that he ended up on the cover of World Magazine as some sort of hipster pastor, and I got a Diet Coke out of the deal.

LifeWay Research just released research on multisite video venues. When we started to explore the idea of researching the receptivity people have toward multisite, I did not want anyone to think that the questions were loaded against multisite. (When you dare to say that there are some side effects, people assume you are anti-something. I'm not. I'm fine with multisite if it is done well.)

So, I reached out to Geoff and he gave me some feedback about the draft questions (which made them a bit longer, but also better). Then, after the results were in, I sent the pre-release research to him for comment. He shares his input here.

Geoff has served on staff at Seacoast Church and Saddleback Church. He now serves as Pastor of Church Planting at Southeast Christian in Parker, Colorado as well coaching churches and leaders around the country. His article is below. Don't miss Bob Hyatt's article on some of the issues with video venues here.

When my Senior Pastor suggested in 2001 that our church should open a new venue utilizing video teaching I told him it was the dumbest idea I'd ever heard. Who would want to watch him teach on a video screen? (I probably got away with more than other staff members because he's my brother) Instead of firing me he sent me to Atlanta to watch Andy Stanley on video at Northpoint Church. My experience was similar to hundreds of people I've talked to since, about 15 minutes into the sermon I stopped caring it was video. Video teaching is now used effectively by churches around the world, so we know it "works". The question is will it work for everyone.

According to a new survey by LifeWay Research the answer is definitely, "No." There is a significant percentage of the population who have no interest in attending a church that employs video rather than in-person teaching. So what does that mean for the future of video teaching? Here are my takeaways from the research:

1. Live teaching will always be more popular than video teaching.

The survey shows that all things being equal people will choose live teaching. This is true outside the church as well. If the Denver Broncos offered a choice at Mile High Stadium between watching the game on a video screen or watching it live we'd choose live. That doesn't mean video isn't effective. Millions of people watch the NFL by video because TV offers big advantages over buying a ticket, driving to the stadium and shivering in the cold. But if all things are equal we'd rather see it live.

This is why churches often struggle filling video venues on the same campus as an in-person teaching venue. Unless there is a compelling reason to go to the video venue people will choose live teaching. A different style of worship or environment is seldom compelling enough to overcome the draw to see the preacher live and in person.

2. People often don't know what will or won't be effective until they experience it.

Before launching their new product Sears asked focus group participants if they would buy a remotely operated garage door opener. The response was overwhelmingly negative. Today suburbanites can't imagine getting out of their car to open the garage. If Steve Jobs had asked people if they would pay a premium price for a better MP3 player before building the iPod the answer would have been no. Henry Ford famously said if you asked the people what they wanted they would have asked for a faster horse.

Before Seacoast opened our first campus using video teaching we did focus groups. When we asked Seacoast members who drove more than 30 minutes to church if they'd attend a Seacoast site in their community they overwhelmingly said yes. When we asked if they'd attend if the teaching was by video they overwhelmingly said no. Most of those people now attend a campus with video teaching.

Its not surprising that people who've never been to a video venue told LifeWay they wouldn't go. People don't know what they don't know.

3. Young adults and people with no church background are the most open to video teaching.

This is the most encouraging part of the survey. The demographics most open to video teaching are people under 30, people with no church affiliation and people from the northeast which is the most unchurched area of America.

Churches who start video venues for their existing congregation may have a great deal of resistance to overcome, but venues that creatively leverage video teaching to reach people far from God have huge potential.

4. Older people who regularly attend church are the least favorable toward video teaching

The main takeaway for me from this data is that video teaching has more potential as a tool for evangelism than a way to move people out of a crowded auditorium. The future for multisite churches utilizing video teaching is more about salvation for sinners than satisfaction for saints.

Of Course People Prefer Live Preaching, But Video Venues Work When You Work Them