What were some of the most popular church trends blog posts this year?
Ed Stetzer 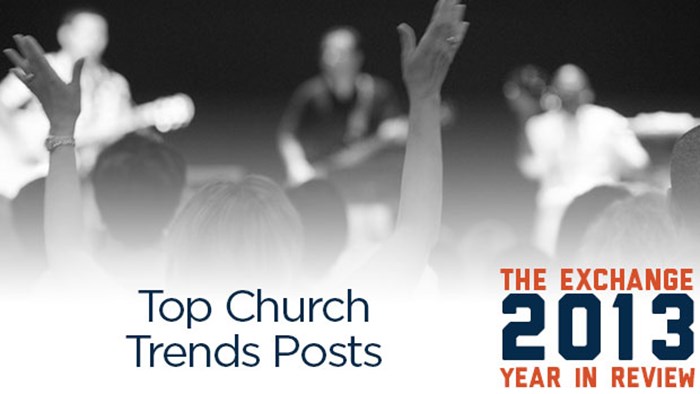 By trade, I am a missiologist—I study the Church for a living. I study the ins-and-outs of Church life, and I study the people that make up the Church. As a result, many of my blog posts, particularly those that fall under the Mondays are for Missiology category, are focused on the Church and trends within Church life.

Here are five of the Top Church Trends Posts of 2013, with excerpts:

1.The State of the Church In America: Hint: It's Not Dying

The church is not dying.

Yes, the church in the West—the United States included—is in transition right now. But transitioning is not the same as dying, particularly if you hold the belief that Christianity is represented by people who live for Christ, not check "Christian" on a survey form.

While I believe we need to understand reality inside our ranks, I don't believe the situation is quite as dire as many are making it out to be. Actually, no serious researcher believes Christianity in America is dying. Not one.

Instead, I believe this current cultural shift is bringing clarity that will assist in defining who we are as Christians, and that is a good thing in some ways.

I have talked about this before, but I think it bears repeating, if for no other reason than to encourage us in our shared mission once again.

In the American context, 2009 was a turning point in regards to the perception of Christianity's health in the United States. That year, the results of the American Religious Identification Survey (ARIS) caused quite a stir. In its wake were several articles in prominent national publications touting the coming demise of Christianity in America. And Americans bought in.

The ARIS results showed the percentage of self-identified Christians had fallen 10 percentage points, from 86 to 76, since 1990. It also showed that the "Nones"–those who claim no religious affiliation–rose from 8 to 15 percent in the same time period.

2. Trends Among the Fastest-Growing and Largest U.S. Churches

Each year at LifeWay Research, we work together with Outreach Magazine to create the Outreach 100 listings of the country's Fastest-Growing and Largest Churches. On one hand, these lists are one of the most anticipated things we do each year. People seem to eagerly await the lists so they can learn from these churches about what God is doing to build his kingdom across the United States. On the other hand, there are those who complain about the lists. They seem to think this is a way of exalting "big churches" in an effort to make them look better than the churches that are not on the list, when nothing could be further from the truth.

Remember folks: facts are our friends.

I love to learn. I have spent a significant portion of my adult life in the classroom, either as a student or as a professor. These lists feed our hunger to learn as we evaluate the temperature of the churches we study in an effort to learn more about the ways God is working. I hope these lists encourage you and challenge you. I hope, like me, you read them and celebrate the ways God is working. I hope they challenge you to think through your own strategy to reach your community with the gospel.

On this year's lists, we noticed many of the same trends we've seen in the past. Among the recent trends, we continue to see multisite churches becoming more and more common. Among the 100 Largest churches, we find only 12 have a single campus (although one church did not report how many campuses it has). On the Fastest-Growing list, the number with a single campus is much greater—42, reflecting close to a split in the number of churches that do and do not have multiple campuses.

Some once believed this move to grow via multiple campuses was a temporary trend, but it appears to be a trend that's here to stay. While it was once the domain of only the largest churches, we now see smaller churches deploying the same methodology. What's interesting to me is the number of churches that utilize a multisite methodology and are also committed to church planting. The two are definitely not exclusive of one another. I think this may have something to do with the missionary heart of these churches.

Whatever your opinion of multisite may be, there can be no doubt it is the new normal.

Multisite has joined a list of models and approaches that were once out of the mainstream and now is commonplace-- most of us know of one or more multisite churches.

Though I would not have guessed it ten years ago, it's normal now.

No longer just a new trend, they now number more than 5,000 churches-- and growing. Multisite churches have even grown faster than megachurches (which are also growing). In fact, last year, 62 of the 100 fastest growing churches in America (as reported in our research at Outreach Magazine) are multisite. Among the fastest-growing and largest churches, this is just common practice-- and growing every year.

But, that has led to much conversation-- some profitable, some not. Since large and fast-growing churches are engaging in the practice, that (in and of itself) raises suspicion with some people. There are also ecclesiology (and other) questions as well. Yet, I am not addressing all of those (sometimes legitimate) concerns here, but rather talking about the growth and mainstream acceptance of the practice, and hopefully encouraging a certain type of multisite.

Though I've been occasionally cast in that light by the uninformed, I am not "anti-multisite." Yet, my experience is that if you are not filled with breathless enthusiasm for every innovation, you must be against it. Such is life.

I am, however, critical of multi-site done poorly, and I am in favor of multisite done well-- thoughtfully and in such a way that intentionally addresses some of the issues that may be inherent with that format.

And, when research shows us some of the positive outcomes of multisite, it should help others see-- at least those willing with willing eyes-- the impact the model is having.

As we saw in some recent megachurch research, multisite churches defy a large number of the stereotypes with which they are associated. The facts from the study are clear.

I am often invited to speak to a lot of different churches in a lot of different buildings. Some churches obviously put great care and thought into their building. It clearly reflects portions of their theology and serves to further their ministry goals. Others? Not so much.

So, with that in mind, what are some of the most common mistakes pastors make in church design and the building of facilities? In other words, what things should churches avoid when considering church construction?

Most of us have probably driven by a church with green windows and roof that looked like it was fromThe Brady Bunch. These churches built trendy in the 1970s and now they're regretting that. A photo slideshow of "The Ugliest Churches in the World" finds most of them went for a modern look that's not so modern anymore.

But, even more than the aesthetic appeal of a church building, I think many churches are going to wish they had not built gigantic multi-thousand seat auditoriums, and many others will regret the quaint columns and brick building on the edge of town.

For example, before planting my current church, I served as an interim pastor for a church in Nashville with a 3,000-seat auditorium. Meeting with the staff before I left, we all agreed that if the church were started today, we would not build in the same way. However, the same can be true for several of the churches I've served through a church revitalization process. The building is no longer a help and they wish they had done it differently.

I wrote a few other posts on Continualist Christians and the charismatic movement this year as well. You can find them here, here, and here.

I'm thankful today for my many faithful friends in the continualist movement, represented by Pentecostals, charismatics, and Third Wave Christians around the world. Their impact is widespread—depending on how you count, up to half a billion Christians in the world are connected with those three continualist traditions.

Much discussion is taking place on this movement—some helpful, some not. Regardless of your view, it is good to understand a movement before evaluating it. As such, I thought it might be helpful to share a bit of information about the movement to, I hope, make a better conversation. I'm not a scholar of such movements, but perhaps my (too long) article will be of some help.

Continualists make up a grouping of those who believe that spiritual gifts, particuarly the sign gifts, continued (hence, continualists). Continualists generally include Pentecostal, charismatic, and Third Wave believers (all described below in this article). They are to be contrasted to cessastionists who think such gifts have ceased (with some variation as to which gifts have ceased).

Continualists come in three streams that observers use to help explain the movement, and it is indeed quite a movement. In fact, it is the fastest-growing movement in the history of world Christianity.

I am thankful for my faithful continualist friends who are reaching the world for Jesus while we are talking about them from the vantage point of the declining U.S. church.