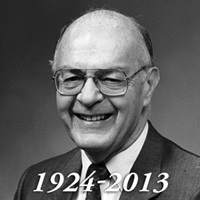 Dallas Seminary has a tribute:

...he taught more than 10,000 students. He also ministered in person in more than 80 countries. Through speaking engagements, radio, tapes, films, the 16 books he authored and coauthored, countless journal and popular-market articles, his service on numerous boards, and his work as a chaplain to the Dallas Cowboys (1976-1984), his reach was and is worldwide.

"The best stuff I learned from him I couldn't take from my notes--there's no course in wisdom," said Swindoll in a Q&A with Hendricks in CT's sister publication Leadership Journal. "The best stuff is not in a curriculum. I had no idea there would be someone on this campus who would believe in me before I ever believed in myself." Following news of his death, Rick Warren called him a "friend and mentor to so many of us."

Hendricks, known by his students as "Prof," taught for 60 years at DTS and mentored some of the most influential evangelical pastors in the United States, including Tony Evans, Robert Jeffress, David Jeremiah, Erwin Lutzer, Joseph Stowell, and Chuck Swindoll. He also influenced future professors and authors, including Bruce Wilkinson, best-selling author of The Prayer of Jabez.

Howard Hendricks is dead, but his ministry will not die. He built into the lives of pastors and church leaders who will carry on even though he is gone. I am not sure I ever had a conversation with him. I probably exchanged a word or two, I just don't remember. But today, in Sioux City, Iowa, I will teach a Bible study in the book of Nehemiah, using the principles I learned from Dr. Hendricks. Thousands of men can say that their lives were changed by his life and ministry.

I will miss him. I learned much from him-- and countless other pastors will agree.

Join the conversation on Facebook
Tags:
None
Posted:
February 20, 2013