The blogosphere has been buzzing about the recent incident involving Pastor Alois Bell of the Truth in the World Deliverance Ministries Church and Applebee's server Chelsea Welch. If you haven't heard about the incident, here is a quick recap:

Pastor Bell was believed to have stiffed a coworker of Chelsea's on her tip (that was later disputed). Perhaps most disturbingly, Ms. Bell commented on the receipt that she was a pastor and only gave God 10%-- so why should she give the waitress more? Chelsea took the receipt and posted a picture of it online as a joke and it went viral. Subsequently, Applebee's fired Chelsea and Pastor Bell has been publicly shamed in the media and has even is alleged to have received some death threats.

Pastor Bell has apologized and I certainly think that is a good thing, though it would seem to be normal for some to question her judgement as a pastor if this is how she acts in public. However, I (too) have done some stupid things, so it is not my desire to pile on but to point to the future.

However, this whole incident has enflamed a long burning discussion about the stereotype of the conduct and courtesy (or lack thereof) that many Christians display toward servers, waitresses, valets, and others in the service industry. Among other things, the "Sunday morning crowd" at restaurants has a bad reputation.

But why does this stereotype exist? Because, in large part, many servers think it is true. Many Christians do as well. But, what does the research say?

According to the only study of which I am aware, published last year in the Journal of Applied Psychology, it appears that "Christians as bad tippers" is not supported by the stats. In their study, "Are Christian/Religious People Poor Tippers?," Michael Lynn and Benjamin Katz explain:

The results of this study produced three notable findings about the relationships between religion and tipping. First, Jews and those with no religion tip significantly more than Christians and members of other religions. However, the average Christian tips 17 percent of the bill when receiving good restaurant service and only 13 out of 100 Christians receiving good service leave a tip below 15 percent of the bill. Second, worship frequency has no significant main effect on reported tipping. Third, worship frequency significantly interacts with service quality such that the effects of service quality on tips were stronger the less frequently the tipper attends religious services.

You can read their whole report here and it would be worth doing so before saying that your personal experience trumps the research.

So, how do we deal with such a perception?

In an article at the Christianity Today Her•meneutics blog, Karen Swallow Prior gives some helpful advice:

Eating out is expensive. But if diners can't afford all of the expected expenses of eating out, they should go to an establishment they can afford, or not go out at all... Maybe some folks don't know that the minimum wage for servers is lower than for everyone else, or that the percentage for tips increases like everything else... Tips are payment for services rendered.

I don't think that Paul had servers in mind when he exhorted believers, "So whether you eat or drink or whatever you do, do it all for the glory of God," but the principle certainly does apply. Those who are to represent Christ in all they do should remember that includes paying the check-- in total-- at the end of the meal.

Being cheap or taking your frustrations out on a server is in no way Christlike. And it is not indicative of how we should live our lives as Christians. Furthermore, leaving a tract instead of a tip is so foolish, it is hard to imagine. Yet, it happens-- and it undermines our witness and reputation. If you are leaving something with your server about the grace of God, make sure it is always connected to a gracious and generous tip.

So in response, I've been striking up conversations with servers and asking them about this perception. Yesterday, I talked to a server, and we discussed the "pastor tip gate" scandal. I wanted to do a small thing to change the perception so I wrote a note on my bill. 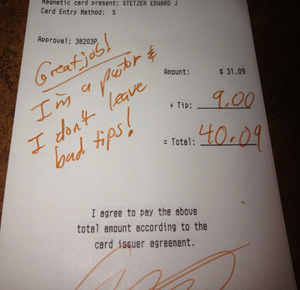 When I tweeted it, more than 12,000 people viewed or shared it in a day-- showing that there is some angst on this issue. And, there should be.

I'm not suggesting you write the same-- as my comment was a result of our conversation-- but I do think we need to be generous and build a better reputation. It's needed.

So, statistically, this claim does not hold up. I've written before in in Christianity Today on the fact that Christians like to make up-- and widely distribute-- the stats that make themselves look bad. But, in this case, a lot of non-Christians believe it as well-- which is my greater concern. So, we should address it-- with the facts (it's not true) and with our example (we can do better).

The answer, I think, is simply to be better tippers for the glory of God!

Join the conversation on Facebook
Tags:
None
Posted:
February 8, 2013

Stats Don't Show that Christians (and Pastors) are ...