3 Things Privileged Christians Can Learn from the Trayvon Martin Case 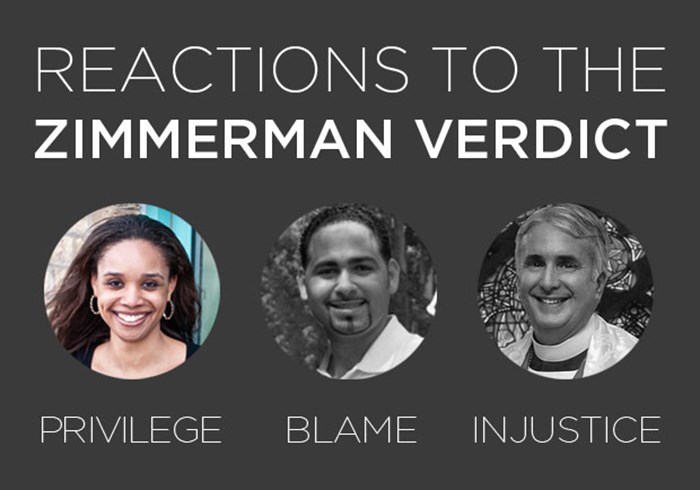 Christena Cleveland is a social psychologist with a hopeful passion for overcoming cultural divisions in groups. Drawing from a vast body of research, she uncovers the underlying processes that affect relationships within and between groups and helps leaders understand how to promote an appreciation for diversity and build effective collaborations with diverse groups. She recently completed her first book Disunity in Christ: Uncovering the Hidden Forces that Keep Us Apart.

With the acquittal of George Zimmerman, the response to the conclusion of the Trayvon Martin case is radically divided along racial lines. This seems to happen every time a nationally-publicized incident occurs between blacks and whites. It happened in 1991 when black parolee Rodney King was brutally beaten by white LAPD officers. It happened in 1999 when white NYPD officers fired 41 shots at African immigrant Amadou Diallo and killed him. And it happened in 2009 when white Cambridge, MA, police officer St. James Crowley arrested black Harvard professor Henry Louis Gates Jr., while Gates was breaking into his own home, just to name a few examples.

Based on my conversations with both blacks and whites, I've noticed a stark contrast in how the different groups tend to perceive these incidents. Blacks often perceive them as outrageously unjust, oppressive, critically important, and indicative of deep-rooted racial injustices in American society. On the other hand whites often perceive these incidents as relatively less important, as isolated events that aren't necessarily related to larger societal issues, and/or the result of blacks engaging in "race-baiting" or "playing the race card."

Indeed, a 2012 Gallup poll study that compared black and non-black (the majority of which were white) reactions to the Trayvon Martin case found that "Blacks [compared to non-blacks] are paying much closer attention to the news of the incident; overwhelmingly believe that George Zimmerman is guilty of a crime; [and] believe that racial bias was a major factor in the events leading up to the shooting." Based on these data and my own personal observations, it's seems that blacks and non-blacks/whites tend to perceive this event and the underlying issues that are related to the event very differently. What is perceived as a serious problem to black people doesn't seem to matter as much (or at all) to others. What is perceived as unjust and racist to black people seems to go unnoticed by others.

We need to pay attention to the fact that America's consciousness is fractured along racial lines.

This is a problem for everyone who participates in our society. But I believe that this is an even greater problem for those of us who identify as Christian, are called to live out the metaphor of the diverse and interdependent body of Christ, and hope to follow in our Savior's incarnational and subversive footsteps. We need to pay attention to the fact that America's consciousness (and in many ways, the Church's consciousness) is fractured along racial lines – for this misrepresents the cross-cultural and unifying love of Christ. And before we spout our opinions, join sides and dig in our heels, we need to pause for a moment and humbly ask ourselves, what is really going on here? Is it possible that I'm missing something? And how should I respond as someone who takes my cues from Christ's words and example, rather than my own personal experience?

It's all about privilege

I'm focusing on race between blacks and whites because the Trayvon Martin case centers on this thorny and long-standing issue. But on a broader level, this case illuminates the problem of privilege in America – a problem that fuels many of the cultural divisions and injustices in society. Before we can even begin to tackle issues of race (or gender, class, etc.), we must examine them through the lens of privilege.

Those of us who are privileged benefit from living in a society that accommodates rather than alienates us.

Those of us who are privileged (e.g, are white, male, middle-class or higher, educated, able-bodied, heterosexual, and/or physically attractive, etc.) benefit from living in a society that accommodates rather than alienates us. But these benefits are difficult to detect. For example, as an educated, upwardly-mobile privileged person, I benefit from the fact that politicians pay attention to my social class and fight for my vote. I also benefit from the fact that I can talk with my mouth full without people attributing my behavior to the "uncivilized" nature of my class. But I don't typically notice these benefits; I take them for granted and think that everyone else enjoys them as well. In fact, I'm motivated to ignore these unfair benefits because according to sociologist Shamus Rahman Khan, "Most Americans want to believe that the world is fundamentally fair, despite all of the injustices we see on the news and the awfulness we find in the paper."1

So if a socio-economically oppressed black woman complains to me that people are always attributing her behavior to her "uncivilized" social class, I'm tempted to respond by saying to her, "Are you sure you aren't overreacting?" or by thinking to myself "That hasn't happened to me, so I don't think it has really happened to her."

But to disregard this woman's perspective and experience is a mistake because it a) further oppresses her by communicating to her that her perspective isn't valid, b) prevents me from learning from a culturally-different viewpoint and addressing my own blind spots, and c) disables my ability to stand in solidarity with and understand the experience of my sister and fellow human being.

No, the privileged Christian's response to different viewpoints from members of oppressed groups should be marked with an eagerness to learn, a desire to stand in solidarity, and great humility. So without further ado, here are three things that privileged Christians can learn from the Trayvon Martin case

There are multiple realities in America.

The differences in perceptions between whites and blacks that I described above are indicative of profoundly different realities between privileged and oppressed people. There's a reason why blacks have reacted differently to the Trayvon Martin case than whites. Black people, on the whole, experience a very different America than white people. Most relevant to the Trayvon Martin case, many black people have been a target of racial profiling. Being followed, harassed, frisked or stopped for no apparent reason (other than one's darker skin color) is simply a reality for many black people, especially black men. (For a personal account of racial profiling from Efrem Smith, author of the Post-Black and Post-White Church, read this.)

When you're privileged, it's easy to think that your perspective is the only perspective.

Indeed, social psychologist Keith Payne's research on perceptions of black and white men has found that people tend to associate black men with danger and white men with safety. When making snap judgments, people are more likely to misperceive a tool to be weapon when it is associated with black men. But people are more likely to misperceive a weapon to be a tool when it is associated with white men.2 Based on the personal experiences of black people and the findings of Payne's research, it should come as no surprise that black people are more inclined to believe that race plays a significant role in events like Trayvon Martin's death. The perceptions of black people are informed by the very real experiences that black people endure. If you haven't personally been a target of society's negative perceptions toward black people, you might be tempted to say, "Well, it can't really be that bad." Or, "They're just playing the race card." When you're privileged, it's easy to think that your perspective is the only perspective and that another person's experience is only valid if you validate it. But privileged Christians who desire to demonstrate Jesus'cross-cultural and sacrificial love must wake up the fact that there are multiple realities in America.

It's time for privileged people to listen and learn.

All cultures are imperfect and have their share of blind spots. That's why we need each other and that's why the metaphor of the body of Christ, which preaches humble and mutual interdependence, is so powerfully instructive. But due to long-standing injustices in both the American Christian church and the broader society, the viewpoints of the privileged have enjoyed greater prominence while others have been silenced. Privileged folks typically benefit from being the dominant voice in any conversation between groups. As a result, the blind spots of the dominant privileged group are rarely addressed.

When oppressed folks speak up, privileged folks should be all ears.

When oppressed folks speak up, privileged folks should be all ears.

It's time for privileged people to practice solidarity.

As America grows increasingly diverse, the realities of America are becoming more diverse. No longer can pastors and leaders assume that the people in their communities share their unique cultural experiences. In order to minister effectively, in order to be neighborly, in order to love across differences well, privileged Christians need to practice standing in solidarity with diverse people.

2 Payne, B. K. (2001). Prejudice and perception: The role of automatic and controlled processes in misperceiving a weapon. Journal of Personality and Social Psychology, 81, 181-192.

3 Things Privileged Christians Can Learn from the Trayvon Martin Case

3 Things Privileged Christians Can Learn from the ...