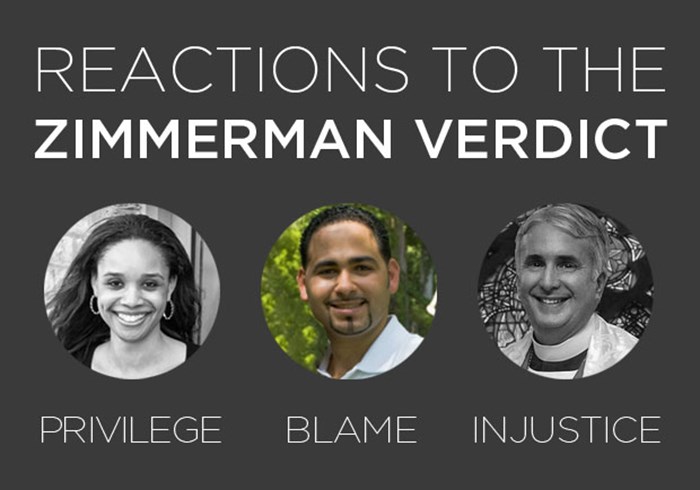 Victor Montalvo is the lead pastor at Reality Community Church in Sanford, FL, a new church that meets in an elementary school and is the closest church to where Trayvon Martin was killed-- just a few blocks away.

Reality Community Church is a diverse Converge congregation (a mix of Latino, Anglo, African-American, and Asian, with no designation at more than 35%). He's led the church, and ministered in a hurting community.

This case is tragic. A young man is dead. Another man's life is ruined. A city struggling with an undercurrent of racial tension for decades has another gaping wound. We look for answers and all we seem to find are questions … and a whole lot of pain.

Pastoring in Sanford may give me a unique perspective. Or, maybe I'm just another guy witnessing a whirlwind. There is nothing pretty about this case. And it's not just a case. It's a horrific and tragic event that has left a young man dead, two families devastated and wounded not only a city, but also a nation.

No one likes to hear of a 17-year old being shot and killed. Unfortunately, it happens way too often.

The news initially struck the heart of Sanford in a tender place. No one likes to hear of a 17-year old being shot and killed. Unfortunately, it happens way too often. As painful as it was, there was callousness to the news. People paused for a moment and then went on with their lives, until the news came of no arrest. People started getting angry, very angry.

Schisms began to form in the city: white vs. black, pro-gun vs. anti-gun, pro Sanford PD and against. As massive marches and demonstrations took place, outsiders looking for a way into the conversation flooded our city. Entire streets were shut down, businesses were closed, and many feared for their safety. Conversations on Facebook and Twitter escalated the tension. Rumors of impending riots began permeating the city. Everyone had opinions but no one seemed to have facts. A boy was dead and we were mad.

Did the jury make the right call? I just don't know. The reality is that, above all else, this was an extremely complicated situation with both individuals involved operating from a sense of fear. Trayvon feared he was being followed and George feared another home invasion in his neighborhood. Did it all happen the way the trial painted it? We will never know. We can't really know, and that is terribly unsettling.

It's unsettling because we want to close the book. We want answers. Outsiders came looking for a story or looking for a fight. We who live here just want this to be over. We want justice served and the spotlight gone so we can begin to put the pieces of our fractured city together. As long as the nation peered into our little town they sought for one thing: a villain.

As long as the nation peered into our little town they sought for one thing: a villain.

The news, the talking heads, the activists, they just wanted a monster. They wanted someone to blame, someone to hate. They tried to paint George Zimmerman as a hotheaded, racist, wannabe vigilante. If that wasn't sticking they tried painting Trayvon Martin as a reckless, drug-using thug looking for trouble. Both were horribly wrong, but more people watched, and more people seethed.

It reminded me of one of the wide range of responsibilities I have as a father. One particular night, I was called upon to be a "tiger slayer". At three-years old, my daughter saw the Jungle Book and woke up afraid. Apparently, there was a tiger in her closet. In the wee hours of the morning I concluded that trying to explain to her the absence of the tiger would take too long and may not actually work. So, I lied. Well, I pretended. I "found" the tiger, smashed it and drug it out of the room. Afterwards, my daughter slept wonderfully.

The Church must model the way out of this racial abyss.

Contrary to the popular saying, God is not color blind. God is colorful! He made our various differences. The diversity of our young and beautiful community of faith is a testament to this truth. This philosophy is woven throughout our entire church. Our leadership, our preaching, our music, our marketing, our activities, our outreaches and even our food are all celebrations of diversity. We miss God's plan altogether when we settle for racial tolerance. Don't tolerate racial differences—celebrate them!

We can look to Christ who took upon himself our sin and pain. We don't need a scapegoat because we have a pure and spotless Lamb. This world is pretty messed up, but we have a Savior that catches every tear, comforts every loss, crushes every sin and makes all things brand new.