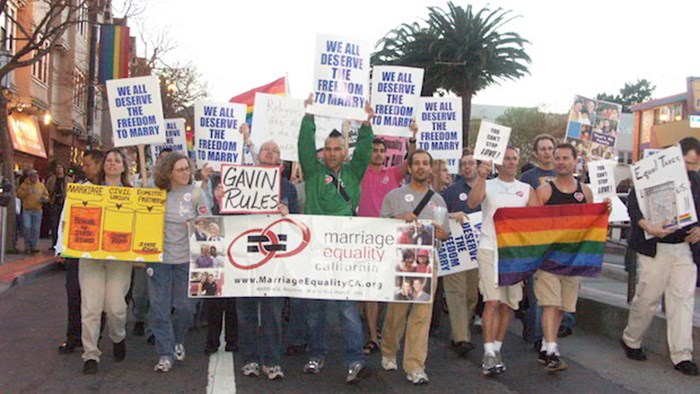 Same-sex marriage is all over the news. The inertia seems to be in favor of societal acceptance of gay marriage. Furthermore, the legal means the Supreme Court used to rule on the subject leads many to conclude it will soon be law in all 50 states.

So, I was intrigued when John Stonestreet and Sean McDowell decided to write a book on the subject while so many others are adopting a keep-silent view, waiting for the storm to pass.

John Stonestreet is the co-host of BreakPoint Radio and a well-known speaker. Sean McDowell is a professor at Biola University, author, and apologist. Stonestreet and McDowell recently released Same-Sex Marriage: A Thoughtful Approach to God's Design for Marriage, and I had the opportunity to interview them about the book.

John and Sean, why even write a book on the subject of same-sex marriage? The legal basis of the Supreme Court's ruling just means that it will take a few  years, but many believe the battle is lost. Are you attempting to build a defense after the  battle is over

The tide is almost certainly turning towards the nationwide acceptance of same-sex marriage, as you suggest, and if this were merely a political/legal issue, then I suppose you could describe our book that way. But, it’s not. It’s a cultural issue, a theological issue, and a personal issue. The legal status of marriage does not alter the Christian’s responsibility to and for it anymore than the legal status of the unborn changes our responsibility to and for them.

Some Christians seem to think the world is over since same-sex marriage has arrived. While same-sex marriage undoubtedly raises difficult issues, we think the coming years will offer remarkable opportunities for the church to shine. And, those who are on the right side of right, to paraphrase Ryan Anderson, are on the right side of history. It may take a while, but eventually people will look back at the devastation the sexual revolution has brought and realize that natural marriage is critical for children and society.

It seems that gay marriage quickly became a religious liberty issue: if you fail to agree with the new definition of marriage, you  don't get to opt your business out of supporting it. How should we  respond to the recent cases of the baker and the florist?

On a practical level, we need to think ahead about a number of things.

First, we need to be creative in our responses. Daniel is a perfect model. While in Babylon, he was nearly forced to eat non-Kosher food. Rather than acquiescing, he came up with a creative alternative—eating vegetables for 10 days and then getting tested by the king. And it worked! For example, a baker we know is considering placing a sign in his store window that reads, "We bake cakes for same-sex weddings. All proceeds go to Focus on the Family.” There is no silver bullet, of course, but there are creative alternatives we have not yet fully explored.

We need to be prepared that our convictions may cost us something.

Second, we need to determine where we stand, while giving other Christians the grace to respond to difficult issues according to their own consciences. There are some circumstances we simply could not support (such as attending a same-sex wedding), but we realize other well-meaning Christians may see it differently. We just need to all think through these issues carefully and be sure we are in accordance with Scriptural principles. The key, according to Paul in 1 Corinthians 9, is a clear conscience. This isn’t relativism, by the way. The only way a conscience can be clear is if it is first informed by truth and, secondly, formed accordingly.

Third, we need to be prepared that our convictions may cost us something. 1 Peter 3:17 says, "For it is better, if the will of God be so, that ye suffer for well doing, than for evil doing.” Many in the gay rights movement have made it clear that the goal is not merely to promote same-sex marriage, but to silence dissent.

Finally, we need to support our brothers and sisters in Christ who find themselves facing hardship because of their convictions. In particular, pastors needs to support their people. We are distressed by the number of pastors saying, “Just bake the cake.” This response violates the sacredness of all vocations as callings of God. Preaching a sermon is the pastor’s vocation; baking a cake is the bakers. If we think it wrong for a pastor to be forced to officiate a same sex ceremony, we ought think it wrong for a baker to be forced to participate in one as well.

How can evangelicals, Catholics, and others defend marriage without  looking like they are angry bigots? Or, is there even a way?

There are some people who will call us hateful bigots no matter what we do. But that is to be expected. There are a few things we can do to be most effective.

First, we need to be very clear on what marriage is and what it is not. Marriage is not the government or church’s endorsement of strongly held, even sincere, affection. It is an institution central to the human experience by which children are best produced, protected, and promoted. Thus it is distinguished by a unique, robust, and ongoing “oneness.” Oneness of this kind implies sexual complementarianism (male and female come together in a what same-sex couples cannot), procreative potential (even if not actual), exclusivity, and permanence. In other words, marriage involves more than being “in love,” being sexually intimate, or even being committed as important as those things are.

We need to be very clear on what marriage is and what it is not.

Second, we need to become great storytellers. Some of the most important stories of love, sex, and marriage are being left untold. We need to tell stories that portray the beauty of lifelong love as well as the power of the natural family. And, we need to tell the stories of those who are being victimized by the so-called “right” to same-sex marriage. There are plenty of stories that fit both of those categories.

Third, the church must model healthy marriage. This is something each of one of can do. No matter how far our culture goes to deny the obvious facts about marriage, there will always be a desire within the human heart to experience family as God designed it.

And finally, we have to be more consistent. It’s not lost on the gay community that the church held no (or at least very few) marches or rallies against no-fault divorce, adultery, or other things that have done even greater harm to marriage and families. There is a reason that the gay community feels singled out. Though we are often unfairly accused of bigotry and hate, we have been inconsistent.

Evangelicals and Same-Sex Marriage: An Interview ...