How do pastors feel about mental illness medication and therapy?
Ed Stetzer 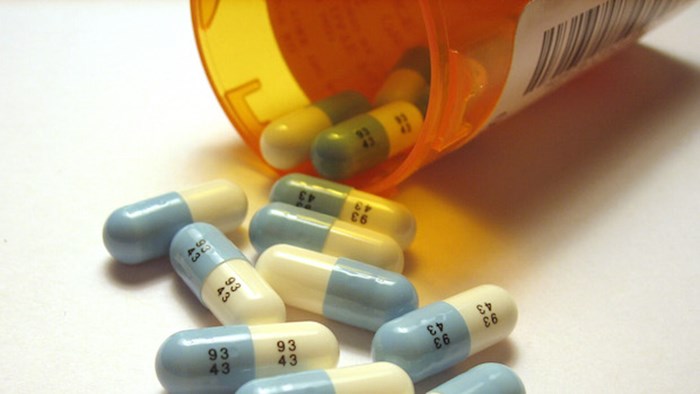 In my last post, I began discussing the results of some recent research conducted by LifeWay Research on the church and mental illness. I laid out information that reveals the current general view of pastors on the subject, some of which is encouraging and some of which is rather alarming. I’d like to move away from generalities and talk more about specific methodologies for treating mental illness and how they are viewed in our churches.

The information in this next graph surprised me. There seems to be a fairly heated debate in the Christian community and the greater culture as a whole about the use of medication. The prevailing thought is that we are, as a society, overmedicated, and that carries an even greater stigma for those inside the church. Many of you reading the blog today would say that people too often rush to medication in many situations, particularly as it pertains to children. I share some of those concerns (that we medicate people, particularly children, too quickly).

I assumed we would see an anti-medicine response from the pastors—but we saw the opposite. 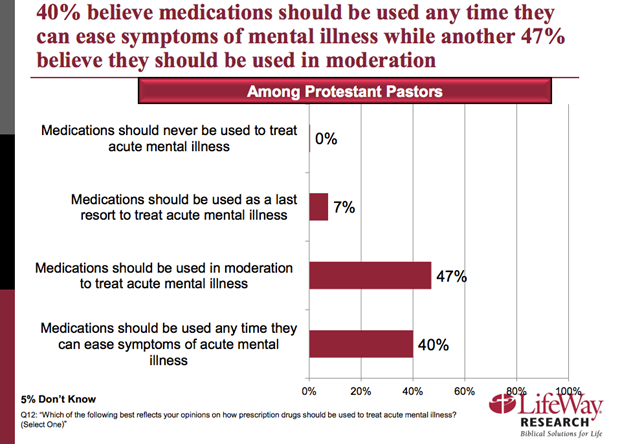 One of the questions posed to them was, “Which of the following best reflects your opinions on how prescription drugs should be use to treat people with mental illness?” On the issue of psychotropic drugs, their answers were surprising to say the least.

This shows that the anti-medication mentality you may have read on a blog elsewhere on the internet is not a main stream view among pastors. That means that an approximate 94% of these pastors believe medications are an acceptable method (at varying levels) for the treatment of mental illness.

Now, we find another very interesting number when we continue to further break down the results. When it comes to psychological therapy, the results were not as completely clear cut in-favor of this type of treatment as they were with medication. 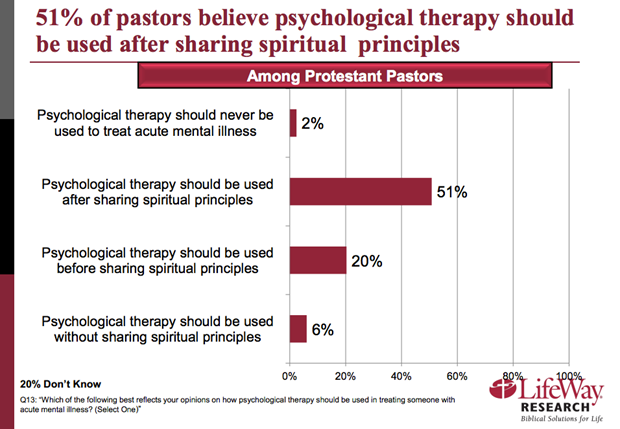 Recall that there was only a minuscule .3% of the pastors who were staunchly opposed to medication, but psychological therapy is off the table for a full 2% of the same group. There was still a vast majority of 76% of the respondents who were in favor of therapy, but another 20% said they simply did not know. We can certainly formulate a hypothesis as to why there is a bit more resistance to this type of treatment than with medication–i.e. theological barriers to the foundations of certain brands of psychology and psychiatry–but we really couldn’t say with any degree of certainty at this point.

We would actually like to do more research on that subject. 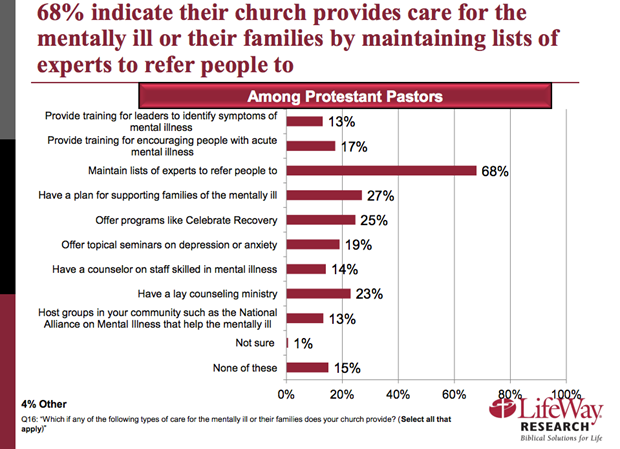 by maintaining lists of experts to refer them to for help. That is the extent of many churches’ reach on this issue.

Where are We Now?

With all of this in mind, let’s revisit our jumping off point for this conversation. 49% of pastors rarely or never speak to their church about acute mental illness. 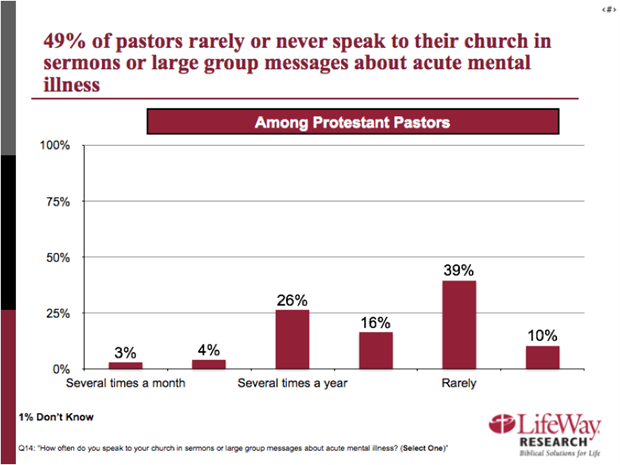 Add to that the ones who responded “once a year,” and we come to 66%, a substantial majority. The prevailing level of communication on this issue leans heavily towards not much at all. 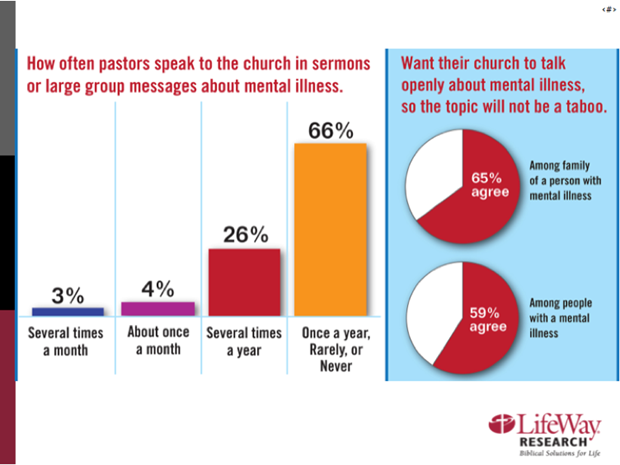 That is very telling, because our pastors are saying it is an important issue that our churches should be involved in, but they are not engaging their people on the issue in the main way we communicate important things–from the pulpit. This is why so many speakers, bloggers, and other writers are pushing the topic and begging us to talk about it more.

Since we released this report, as an evangelical research firm, I’ve been asked by numerous reporters why we evangelicals are particularly interested in this subject. When they ask, they also remind me of the fact that evangelicals have a higher percentage of belief that prayer and Scripture study alone can heal mental illness.

My answer on the subject is pretty direct, so here it goes: I believe in a God who’s sovereign, who can do whatever he wants whenever he wants, often in miraculous and wonderful ways. I believe in the sufficiency of the Scripture for soul care, biblical counseling, and life's crises.

Yet, I'd also say that, by not acknowledging the reality of mental illness in some places, certain evangelicals are disproportionately stigmatizing mental illness in their communities to the detriment of their people. When we refuse to acknowledge realities and when we're unwilling to partner with people inside and outside the church for help (in the medical community, for example), it is to the detriment of the people in our churches.

40% of pastors believe medications should be used any time they can ease symptoms of mental illness.

So I think we find ourselves at an important evangelical moment, and I’m glad we are here. I’m thankful for people who are willing to approach the issue head on, even at great personal cost. Wonderful people like Rick and Kay Warren have really helped to reshape this conversation in evangelicalism in a way that is helpful and necessary.

For the stigma of taboo to be broken, there must be direct, transparent speech, and they are engaging in it. And here I want to be direct, as well. There is simply not enough conversation in our congregations regarding mental illness, and it must change.

Now, there is some positive news in all of this information, too. According to the next graphic, pastors indicate (though we know there is a little halo effect here) that they are preparing for these issues in ministry and in life. For example, 66% of the respondents said they’ve read several books on counseling, and you should keep in mind that they are not all Seminary or Bible college graduates.

Forty-one percent said they have taken seminary courses on care for the mentally ill. Many others have taken grad school courses, utilized websites to research the issue, or attended conferences on the topic. So there is certainly some positive indication of development.

Though I am excited about this positive movement, we have miles and miles to go to come to a place of understanding and helpful engagement with people in our churches who struggle with mental illness. So, we will continue talking about the issue on the blog and shift our attention to individuals and families and how they responded to questions about the church and mental illness. Stay tuned…

Carlos Whittaker talks about his struggles with mental illness on The Exchange.

Dr. Tim Clinton, a licensed Christian counselor and President of the American Association of Christian Counselors joined me for The Exchange to talk about this topic.

Focus on the Family has many helpful resources here.

Here are a number of blog posts I've written (or hosted) on the subject:

Also, be sure to check out the latest issue of Facts & Trends magazine, which takes a closer look at mental illness.