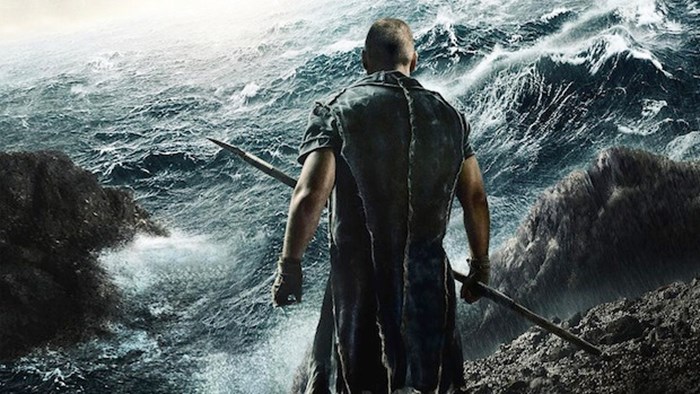 In Part Three of this series, Jerry shares his thoughts on whether Christians should see the movie or not.

If you are thinking about seeing the new Noah film you will want to weigh the positives against the negatives. Previously we looked at the plus category, listing "Five Positive Facts about this Film." Now we look at the negatives.

When the title of a movie is the name of the main character, you have to nail it. This does not happen.

Aronofsky's Noah becomes so disturbed by human sinfulness that he obsesses on the idea that the race should not survive. God must be using the hero's family just to save the animal kingdom and then mankind will die out. If his son's wife has a baby girl, Noah announces a plan to take that life to prevent the human race from going forward. Later, with Noah's knife raised over twin daughters you sense a composite, Noah mixed with a bit of Abraham and going crazy.

When the title of a movie is the name of the main character, you have to nail it. This does not happen.

The portrayal of Noah during this part of the movie is so dark that you do not want to like him. It is hard to reconcile this character with the "righteous" man described in Genesis 6 or the man of "faith" described in Hebrews 11.

Jews and Christians will have a hard time recognizing Noah in this film.

The environmental agenda is overdone.

While showing images of war, violence, theft, and sexual sin, the main evil of humankind according to Noah is the abuse of the environment. Man has been guilty of a scorched earth policy brought about by primitive industrialization, resulting in apocalyptic scenery reminiscent of the Mad Max trilogy. Think Global Warming.

At least that is what Aronofsky wants you to think. Killing animals is also condemned as a departure from the lifestyle in the Garden of Eden. This environmental theme reaches a "preachy" level that secularists would mock if applied to some evangelical doctrine in any other movie.

While much in the film feels like a set up for this agenda, the film does not set the hook. Perhaps some of the back and forth in the editing process (described in the press) caused them to moderate that message.

To the contrary, the words in Genesis 6 used to describe the sins of Noah's generation are: wickedness, imagination of the heart on evil always, corruption, and violence. The textual emphasis is on "violence." Not a word about hunting or mining; knowing this, the environmental agenda feels phony.

Noah, the film, fails in this regard.

The theistic evolution scene will be a concern for many.

In the darkness of the ark, Noah retells the creation story to his family. From the beginning, there is the Creator, who calls forth the light. So far—so good. However, visuals are supplied once life gets going, which show primitive species morphing again and again to more sophisticated creatures.

That cinematic slight-of-hand notwithstanding, there is a clean break in the cycle when Noah speaks of the first man and woman. They just appear hand in hand, no anthropoid halfling in between.

Let's be clear about what this is, and what it isn't. This is macro-evolution, from amoeba to aardvark. But contra Dawkins and company, the beginning and end of it seem sacred. God starts it from nothing and ends it by starting something altogether new with man.

Many conservative evangelicals, like me, believe that a straight forward reading of the biblical text indicates that new "kinds" of life were specially created, not evolved. If you agree with this view, this scene may rub you the wrong way. In the larger cultural war, the tip of the hat to a Creator will equally be a frustration to the new atheists.

Here's the "CliffsNotes" summary: The "Watchers" helped mankind with technology; humans abused it for evil; God cursed the angels for this and turned them into rock giants; these fallen angels help Noah build and defend the ark; when they die in the battle against the bad guys, the mysterious beings go up to heaven.

Whew! You have to see this—not to believe it.

In the long line of biblical interpretation about the Nephilim concept, which is quite rich, this one definitely takes the cake for being the most fanciful. Besides that, in Christian theology fallen angels do not go up to heaven in the end, but down to the other place.

It has already been noted that Noah follows the main lines of the biblical plot. However, secondary elements do not fare so well.

Two of Noah's sons (teenagers, not adults) do not bring wives on the ark, but the one son's wife has two twin girls. Are these future wives for the other two?

The main nemeses (Tubal-Cain) hacks his way into the ark, eats some lizards as a stow-away, and tries to kill Noah.

There are "magical" objects that do the supernatural: a seed, a potus, a drink, and a birthright snakeskin. Are these occult or just extra-biblical miracles of biblical proportion?

In some cases, it looks like two of every species are packing into the ark rather than two of every biblical "kind." That would make a very tight fit.

So Noah gets Noah wrong, gets the environment wrong, gets evolution wrong, gets angelology wrong, and gets some biblical details wrong. Compounding these problems, add the fact that none of these negatives can be deduced from watching the previews that have been released.

Given these facts, and facts they are, the movie trailer may feel like a "bait and switch" to Jews and Christians. For instance, in the trailer where Noah says, "I am not alone," he is not talking about God. You'll see.

So, what do I think Christians should do—go see it, ask our church to buy up block-seating, protest, or boycott it? That question will be answered in the final blog: "Noah: Application for Christians and for Hollywood."

Tomorrow, I'll host movie critic and pastor Thomas McKenzie live in-studio on The Exchange. Be sure to join us.

Below is a trailer for the movie.