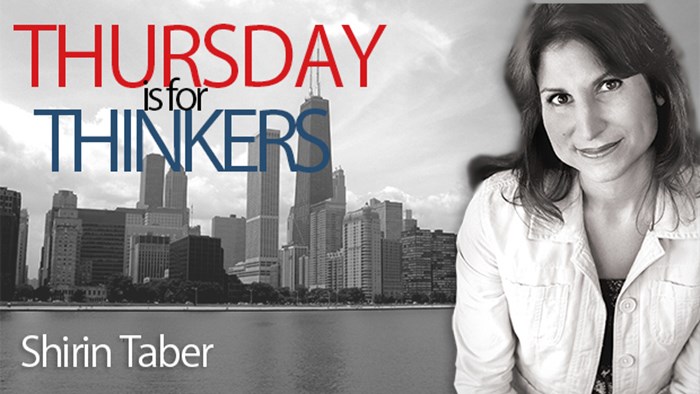 I'm glad to welcome Shirin Taber back to Thursday is for Thinkers. Last week Shirin challenged both Christians and Muslims to be peacemakers. Today she brings her thoughts on countering radical Islam.

Related to Shirin’s suggestions, remember my interview with Bob Roberts on the Morocco Declaration.

As an Iranian-American, I often get asked about the crisis in the Muslim world. I try to lean into the conversation, knowing a lot of sincere people are grasping for solutions.

In the aftermath of the Iraq War, most Americans want to avoid creating a Vietnam-style scenario in the Middle East. We have learned that we can no longer apply colonial remedies or strong arm our enemies into submission.

As UC Davis law professor Kariam Bennoune, author of Your Fatwa Does Not Apply Here, says, “We need an unyielding and thoughtful response to jihadist terror. Moreover, the right needs to understand that force alone is not enough, and misused force can have disastrous consequences. And the left needs to come to terms with the fact that sometimes force must be used to destroy movements bent on deliberately mowing down civilians.”

In light of this, Islam and religious freedom are perhaps the most important issue of our time. We need thoughtful strategies to benefit Muslim societies.

In researching this issue, I collaborated with Dr. Emna Jeblaoui, a professor of Islamic studies and a counter-radicalism expert, whom I met through the George W. Bush Women’s Initiative. Together we developed a practical plan to promote peace and security in North Africa and beyond.

Their feedback is significant and should be passed on to others. It allowed us to develop nine practical ways to counter radicalism and work toward peace and security.

1. Research the root of radicalization. Look at the heart and soul issues. Ask why young men, and sometimes women, are drawn to radical Islam. Many in the Muslim-majority nations are experiencing a loss of spirituality. They need to learn about reconciliation between God, self, and others.

2. Discredit the dangerous ideologies of Islamism, Salafism, and jihadism. We must not support nations that export or fund terrorism. Servant leaders must replace ego-centered political leaders, religious dictators, and warlords. Muslims must learn to disagree without using violence.

3. Narrowly define the enemy. Some Islamists are more dangerous than others. Keep the conflict measurable. Applaud countries like Tunisia that are resisting radicalism and transitioning to democracies.

4. Equip parents. Recognize that radicalization usually occurs when parents don’t take a strong role in their children’s lives. Parents must learn how to speak to their kids about the dangers of radicalization. They most monitor their children’s social media and violent gaming. The number one factor that stops a suicide bomber is his or her mother.

5. Focus on economic reform. Grinding poverty is the impetus for thousands to join death cults in the Islamic world. Many Muslims need help with education, microenterprise, and savings programs. NGOs and churches can assist them.

6. Create advocacy networks. The King of Jordan invited world leaders, including Americans, to advise him on peacemaking and recovery projects. Such networks must include researchers, clerics, businesspeople, policymakers, and stakeholders. Religious advisors should not only be older males, but women and young people, too.

7. Empower women. Include women in all aspects of society. Provide training not only in earning a living, but also in developing women’s networks that are committed to building free and civil societies. We must support gender equality and girls’ education at all levels. Challenge mothers to teach their children to say no to violence.

8. Leverage the media and the arts. Share testimonies of former extremists and victims. Audiences need role models. Rather than restrict free speech on TV or the internet, provide a counter narrative of life and goodwill. Enlist soccer stars and celebrities to promote a message of peacemaking and religious tolerance.

9. Embrace religious freedom. Challenge Muslims to embrace religious freedom at all levels. Allow Muslims to explore other faith traditions and the benefits of secular society. As new democracies are formed in North Africa and the Middle East, Islam should no longer be the state religion. When governments are neutral on religion, religious leaders focus less on power and conflict, and more on civil society and social issues that concern their constituents.

Together, we can encourage Muslims to rethink attitudes on conflict, restrictions, citizenship, and religious rights. We can counter radicalism and share a message of hope grounded in freedom for all.

Shirin Taber, director of the Middle East Women’s Leadership Network and author of the book Muslims Next Door, can be reached at shirintaber@gmail.com.