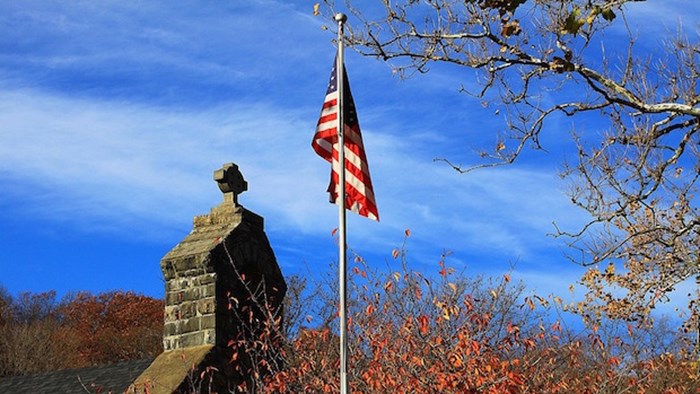 Few things elicit more emotion that love of country. For Christians, at least, love of God should surpass it. But, does it always?

Often as July fourth nears I wonder about how much patriotic emphasis in worship is too much? How much is too little? Should there be any? Are we mixing two kingdoms?

Here are a few thoughts.

Despite headlines lamenting the global decline of the United States since the Cold War, 54 percent of Americans believe the nation is on the upswing, according to a September survey by LifeWay Research. Only 4 in 10 think “America’s best days are behind us.”

And though the U.S. Constitution makes no mention of God, 53 percent of Americans say they believe God and the nation have a special relationship, a concept stretching back to Pilgrim days. Even a third of atheists, agnostics, and those with no religious preference believe America has a special relationship with God.

For followers of Jesus this should be cause for careful reflection. Following July 4th weekend a few years ago, I noted:

For example, this past weekend was undoubtedly one of much pomp and patriotism in many churches throughout America. As an interim pastor at several churches, I've participated in such celebrations and appreciated the intent. However, as a pastor at churches I serve, we have not made a major practice of emphasizing patriotic holidays during worship services. We acknowledge them, pray for our nation and leaders, and are thankful. However, we are also cautious because, as I see it, some churches have overemphasized patriotic celebrations and this has led to a confusion of where "God Bless America" and "All Hail King Jesus" do, and do not, mix.

Many believers have come to wonder about the wisdom of mixing nationalism and Kingdom in church. Some are honestly struggling through what it means. Expressing his inner turmoil about patriotic worship services, Marty Duren wrote,

Sing the Star Spangled Banner at baseball games, football games, Olympics parties, parades, on July 4, Memorial Day, Flag Day and Veterans Day. Erect a flag pole in your front yard, or angle one from the front door of your business. But the kingdoms are distinct by divine decree.

If God today sent me and my family to Botswana, Bangladesh or Bolivia, and led us to become citizens not resident workers, I hope we would do it. I hope you would, too. The Kingdom isn’t defined by geo-political boundaries. Every nation, tribe, people and language contains its citizens.

If you are a follower of Jesus, never forget we are not citizens of this world. We are missionaries living with a green card in the country of God’s choosing.

It can be a tricky balance, and it’s interesting what pastors think about the topic. Based on new data LifeWay Research just released, you’ll likely get a mixture of patriotism and worship this weekend.

Six in 10 Protestant pastors (61 percent) say it’s important for July Fourth worship services to incorporate patriotic elements to celebrate America, according to a survey by Nashville-based LifeWay Research. And while they plan to celebrate the birth of the nation, more than half (53 percent) agree their congregation sometimes seems to love America more than God.

Most of the 1,000 Protestant pastors surveyed say their church will change its worship service to acknowledge America’s Independence Day. Two-thirds (66 percent) plan to include special music honoring America. Sixty-two percent each say they will recognize living veterans and those with family currently serving in the armed forces. Fifty-three percent will recognize families who have lost loved ones in service to our country.

A third of pastors (34 percent) say they plan to include other special ceremonies to honor America.

Also worth noting, the same survey found that 53% of Protestant pastors felt that their congregations sometimes love America more than they love God. 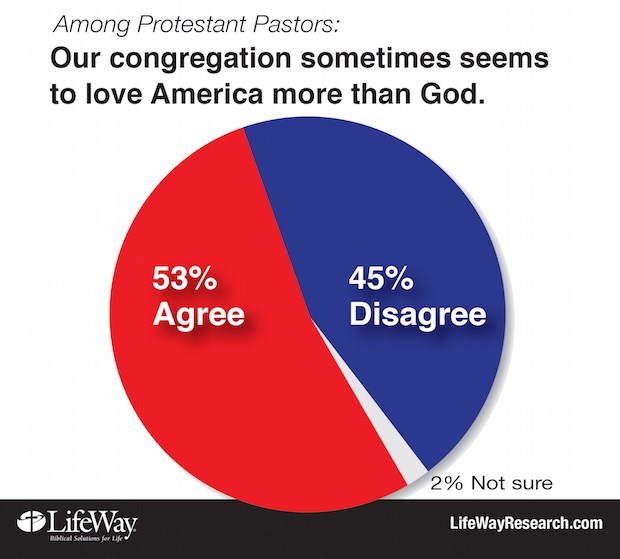 Regardless of your view of patriotic worship services, this number should be of concern. (When we love something more than God, the Bible calls that idolatry, and that’s the last thing that Christians should want.)

So, this weekend be sure you love your country and worship God…and never confuse the two.