Overall, the Church’s influence on Americans is beginning to fade.
Ed Stetzer 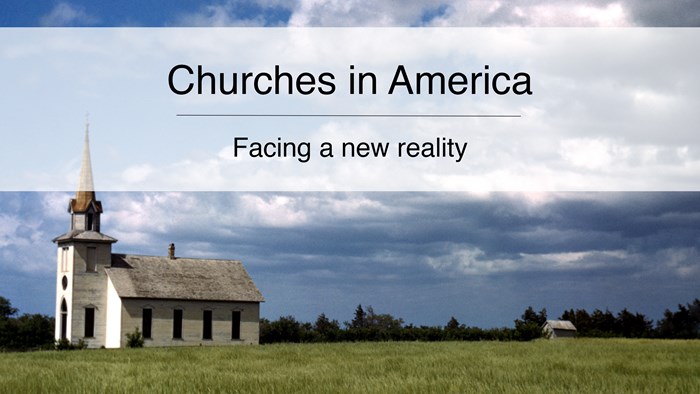 The polls are in and the news is bad for the Church in America. Christianity is on the decline, Americans have given up on God, and the “Nones”—those who have no religious ties—are on the rise. It is indeed true that parts of the Christian Church in America are struggling, while a growing number of Americans are far from God.

As head of a research firm that studies the church and culture, I often tell pastors and other Christian leaders that “facts are our friends.” Surveys and other polls are a bit like running a series of tests during an annual physical. The scale, stethoscope, and blood tests don’t lie. There is no positive spin on your increased weight, high blood pressure, and high cholesterol. Research data gives us a realistic picture of our health—rather than the overly optimistic view we’d prefer.

What the Numbers Tell Us (If We Will Listen)

Overall, the Church’s influence on Americans is beginning to fade.

So what do the numbers tell us about the Church in America?

Overall, the Church’s influence on Americans is beginning to fade. A growing number of Americans have given up on God—or at least on organized religion. They have become “Nones,” a term popularized by Pew Research. And their numbers are growing.

Pew’s 2007 Religious Landscape study, which surveyed 35,000 respondents, found that about 16% of Americans claimed no religious affiliation. By 2015, that number had grown to 23%, almost one in four Americans.

Gallup, another well-respected national firm, gives a wider view of the rise of the Nones. In 1967, Gallup found that about 2% of Americans—or 1 out of every 50—claimed no religious preference. By 2014, that number had grown to 16%, or about 1 in 7.

Pew has also tracked the decline in the percentage of Americans who claim to be Christians. In 2007, Pew found that about 8 in 10 Americans identified as Christians. That number dropped to 7 in 10 in 2014—a statistically significant change in a relatively short time. Pew also found that less than half of Americans (46.5%) now identify as Protestants for the first time in American history.

The Pew data demonstrates a consistent and noteworthy increase among Americans who are disconnected from faith. If this trend continues, and we have every reason to believe that it will, this portion of society will become increasingly prominent and perhaps even become a majority.

These studies show that American religion is in a period of slow decline, says Mark Chaves of Duke University: “None of this decline is happening fast, and levels of religious involvement in the United States continue to remain very high by world standards. But the signs of decline are unmistakable.”

There is no credible research showing that Christianity is dying in America.

Pew’s findings have led some to forecast the complete collapse of Christianity in the United States. The data, however, implies a more complex reality. Frankly, there is no credible research showing that Christianity is dying in America despite the flashy headlines we often see.

Instead, American religion is simultaneously growing and in decline. Fewer people claim to be Christians, but churchgoers—those who regularly attend services—are holding steady in some segments, and thriving in others.

To gain further perspective, let’s look at Pew’s data alongside data from the General Social Survey. The GSS, which began in 1972, is particularly helpful for tracking trends in religious belief and practice.

Some background: the GSS uses a classification of religious tradition commonly known as RELTRAD, which was devised with both doctrinal and historical changes in religious groups in view. This classification system is particularly helpful as we look deeper at the data and seek to understand the nuanced reality of American religion.

The GSS shows only a slight decline among frequent churchgoers.

For example, after seeing recent polls, including Pew’s data, some concluded that the number of churchgoers has collapsed. When we look at the GSS, however, a different picture emerges. The GSS shows only a slight decline among frequent churchgoers. In all likelihood, that decline will be reversed as the data returns to the mean. This should hardly be categorized as a collapse, and in no way affirms popular doom and gloom predictions.

Church attendance data over time is important here. In 1940, 37% of Americans said, “yes,” when asked by Gallup if they had been to church within the last week. In 2015, almost the same number—36%—said they’d been to church. Hardly a collapse; reasonable people, as Chaves described them, don’t need to disagree when the facts are this clear.

What’s more, according to the GSS, we find a stable percentage of the Protestant population attending church regularly—no prodigious drop in Protestant church attendance. Instead, over the past 40 years, the share of Americans who regularly attends a Protestant church has only declined from 23% to 20%.

The reality is that the United States remains a remarkably devout nation. Taken as a whole, about 4 in 10 Americans claims to go to church weekly. Further, more than 138 million Americans—or 44% of the population—belong to a congregation, according to the Association of Religion Data Archives.

Still, not all segments of the church have fared as well. Some are thriving, while others are experiencing significant change. Let’s examine several different segments of the Church, with help from religion researchers Christian Smith (Notre Dame), Greg Smith (Pew Research), Byron Johnson (Baylor), Gordon Melton (Baylor), and Mark Chaves (Duke).