Foundational to following Jesus is that we live by faith and not fear!
Peter Hong 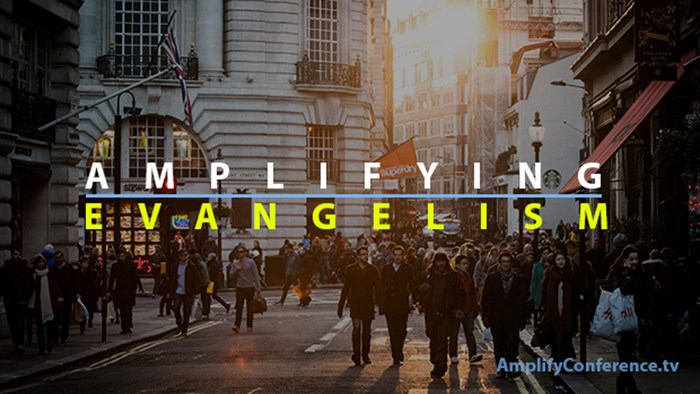 I’m glad to welcome Peter Hong to The Exchange today for our ongoing series, Amplifying Evangelism. Peter is Lead Pastor of New Community Covenant Church in Chicago. He will also be speaking at the Amplify Conference next week. If you haven’t yet registered, you may do so here.

Psychologists tell us that the primary way people deal with fear is avoidance. We just stay away from people and places that cause us anxiety. And what causes us anxiety? The unfamiliar, the unknown. That’s why most of us prefer safe, familiar, homogenous environments and don’t welcome diversity into our lives. Encountering diversity disrupts us, brings about discomfort, and engages us in a world where our deficiencies are often exposed. When we’re in an unfamiliar environment, we don’t feel as smart, as “with it,” as competent, as in control. And who likes feeling that?

So we often cling to what we know, what we’re comfortable with. It makes us feel competent, safe, and in control. But it also does something else.

It also destroys our faith.

But the Times Are Changing

Our culture is currently experiencing some of the most dramatic demographic shifts in recent decades. Here is a brief snapshot:

Are We Willing to Be Scattered?

The traditional way to preach Genesis 11, where we find the story of the Tower of Babel, is to say that humanity was attempting to be like God, trying to make a name for themselves. So as a sign of judgment, God creates different languages and scatters them across the face of the earth, where presumably came the many different people groups. So the lesson is avoid the sin of pride, be humble, know your place, and rely on God to give you a name. Otherwise, God will curse you and you will be scattered.

Among the numerous problems with this interpretation, the word “curse” is nowhere to be found. So what really happened at the Tower of Babel?

Here’s what the Bible actually says about the motivation that prompted humanity to build the Tower: “Now the world had one language and common speech. Then they said, ‘Come, let us build ourselves a city, with a tower that reaches to the heavens, so that we may make a name for ourselves; otherwise we will be scattered over the face of the whole earth.’” What motivated humanity’s desire to make a name for themselves? Fear. More specifically, the fear of being scattered over the face of the earth. The thing that the people wanted to avoid is the very thing that God graciously and mercifully accomplishes, the fulfillment of the cultural mandate (Gen. 1:28), to be a blessing to all the nations.

In choosing to remain together in their safe, homogenous existence, instead of spreading out over the earth, they were thwarting God’s purposes. Walter Brueggemann writes,

The fear of scattering is resistance to God’s purpose for creation. The people do not wish to spread abroad but want to stay in their own safe mode of homogeneity. They try to surround themselves with walls made of strong bricks and a tower for protection against the world around them. This unity attempts to establish a cultural, human oneness without God. This is a self-made unity in which humanity has a ‘fortress mentality.’ It seeks to survive by its own resources. It is a unity grounded in fear and characterized by coercion. A human unity without God’s will is likely to be ordered in oppressive conformity.

To a people who wanted to “stick together” in the comforts of their safe, homogenous, self-serving existence at the expense of God’s mandate to be a blessing to all the nations, God comes and says, “My redemption, and salvation is for the nations. It’s for people of every tribe, nation and tongue (Rev. 5:9, 7:9). Get out of your comfort zone! Get out beyond these walls that you have erected to keep yourself safe and comfortable, and begin venturing out to the rest of the world to fulfill my mission for the world.”

Is your church living in Babel? Babel plays itself out in the lives of churches today! A new church is formed with excitement, energy, vision, and passion to reach the lost. But over time, the church functions less to introduce Jesus Christ to nonbelievers, and begins to pour its energy and resources to providing a safe, secure, familiar environment to those who already believe and belong.

Are you living in Babel? Babel also plays itself out in individual Christians. Take a look at your relationships! Scattering isn’t just about geography. It’s also about attitude, lifestyle, and relationships. Who are you doing life with? Who sits next to you in worship? Who’s at your birthday parties? Who stands in your wedding party? Who’s at your kid’s dedications, and baptisms? Take a look at the people who have profoundly shaped you the most. Are they just like you? Is your life one of a safe, comfortable, homogenous existence?

We live in a culture that is getting more and more fragmented and divided even as it gets more and more diverse. People are moving into self-segregated communities with people like themselves, and building invisible and sometimes visible barriers to keep strangers out. And most of what drives this dynamic is what happened at Babel. Fear! When we’re afraid, we often cling to what we know, what we have experienced, and what we are comfortable with. When we’re afraid, we start building these barriers to protect our linguistic, cultural, and racial identities.

But essential to being a Christian is that we serve a God who calls us to live by faith and not fear. Quite often, God will force us to exercise our faith by calling us to leave the familiar for the unfamiliar, leave the comfortable for that which causes discomfort. To live by faith is to go on a journey and intentionally leave behind what we have known, what we have come to put our trust in, and move out beyond our field of vision. Just as God called Abraham to leave behind the familiar and go on an adventure into the realm of the unknown in order to be a blessing unto the nations, God calls us to do the same. God invites us to respond in faith by going to a new land, with a new identity that honors who we’ve been, but also transcends the limitations of our past and enables us to embrace God’s future.

But He will point. And He promises to be with us.

Join the conversation on Facebook
Tags:
None
Posted:
June 22, 2016

What the Tower of Babel Can Teach Us about Our ...