Lessons from the NASA team who manages the Mars rover.
Daniel Im 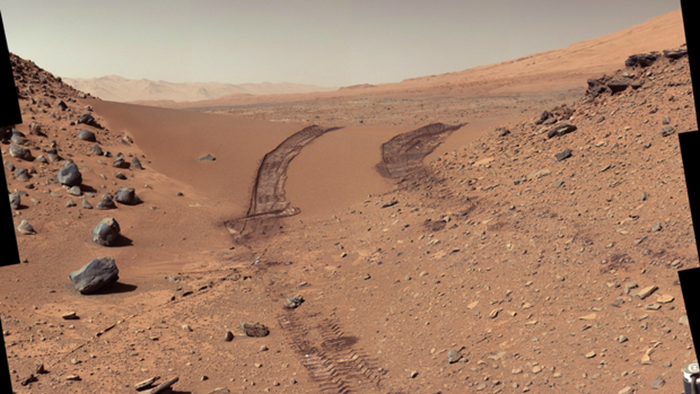 What time is it on Mars?

I was obsessed with space as a child. In fact, I still have my old books about space, and now my children are reading them! I can assure you that it was their decision, not mine. Going along the theme of loving space, I was naturally into Star Wars, but it was Star Trek that won the day for me. Now I’m definitely revealing my inner nerd, but I even had a manual that talked about all the intricate systems on the USS Enterprise.

I recently watched a TED Talk from Nagin Cox, a Spacecraft Operations Engineer at NASA’s Jet Propulsion Laboratory. In it, she explained what life on Mars was like—she even referred to herself as a Martian! Now before you ask Google, Siri, or Alexa when humans first landed on Mars, let me clarify. She’s a Martian because she works on the team that controls the four rovers that the U.S. has placed on Mars since the mid-90s.

When the rovers are “sleeping” at night—in order to recharge their batteries—Cox and her team are hard at work creating the rover’s program for the next day. So essentially, Cox works the night shift.

Now unlike individuals who work the graveyard shift from 11 pm – 7 am here on Earth, things are a bit different on Mars. This is because a day on Mars is 40 minutes longer than a day on Earth. In other words, it takes 24 hours and 40 minutes for Mars to rotate once. Not only that, but a year on Mars is almost twice as long as a year on Earth.

While this might sound like a minute detail (pun intended), this has actually created quite a couple of issues for Cox and her Martian colleagues, such as:

Now what does this all have to do with church planting and leadership in the church?

Well, in order to solve those problems, Cox and her team had to contextualize.

This is a core competency for church planters that we’ve talked about at length on NewChurches.com, the resource for church planters and multipliers that Ed and I lead together. You can scroll to the bottom of this article for further reading on the subject.

Let’s take a look at three ways that Cox and her team learned to contextualize, so that they could better adjust to life on Mars.

In order to differentiate between the days on Mars and the days on Earth, Cox and her team had to first realize that their current vocabulary wasn’t sufficient. They had to learn the language of Mars. No, I’m not talking about learning some foreign alien language like Klingon, I’m talking about being able to verbally differentiate between a day on Mars and a day on Earth.

Since astronomers refer to a Martian day as a sol, Cox and her team decided to learn how to speak the local language when referring to time on Mars. So they created the following rubric:

So that means, if they were talking about today on Mars, they said tosol. Yesterday became yestersol, and tomorrow because nextersol or solorrrow.

When moving into a new neighborhood to plant a church/campus or revitalize an established one, learn how to speak the local language.

You can definitely share stories from your previous context and the church you came from, but watch that you’re not doing this too often. In the first year, it’s fine, since it’s context and it often gives you a sense of legitimacy that you’re not wet behind the ears. But if you do this too often and too long, people will begin to wonder why you even moved to their neighborhood.

Now this might seem manageable for a couple days, but what do you think would happen after a couple of months? How would you even keep track? Especially when it would eventually be 4 pm Martian time, but 6 am on Earth. This sure puts the inconvenience of Daylight Saving Time to rest.

In order to adjust and live like a local on Mars, Cox and her team wore two watches—one for Mars and one for Earth. They adjusted the weights on one of their watches so that it would run slower and be calibrated to Martian time, instead of Earth time.

When moving into a new neighborhood to plant a church/campus or revitalize an established one, start living the local rhythms.

When do the lights come on in your town? Friday night, Saturday night, or Sunday night? Since moving to the U.S., I’ve begun to live like a local, in order to better pastor those in my church and reach those in my community. While my town might not be a Friday-night-lights-high-school-football type of town, everyone around here sure loves college football! So nothing at the church ever gets scheduled on a Saturday night.

Sure, I’d rather watch hockey on Saturday night like I did growing up (Hockey Night in Canada on CBC), but since God has called me here, I need to live into the local rhythms of my town.

What happens when you’re working in the middle of a Martian night, but there’s daylight streaming in through the windows, since it’s 11 am on Earth? You draw the blinds and you keep them shut until time aligns again, right? While this might be easy to do at work, since everyone’s on Martian time, what about your family?

In order to be successful at her mission on Mars, Cox understood the importance of involving her family.

So this also works for the house, for at home. I've been on Mars time three times, and my husband is like, OK, we're getting ready for Mars time. And so he'll put foil all over the windows and dark curtains and shades because it also affects your families. And so here I was living in kind of this darkened environment, but so was he. And he'd gotten used to it. But then I would get these plaintive emails from him when he was at work. Should I come home? Are you awake? What time is it on Mars? And I decided, OK, so he needs a Mars watch.

When moving into a new neighborhood to plant a church/campus or revitalize an established one, be sure to involve your family.

Daniel Im is the Director of Church Multiplication for NewChurches.com, Teaching Pastor at The Fellowship in Nashville, TN, and a regular contributor to The Exchange.

Join the conversation on Facebook
Tags:
None
Posted:
April 11, 2017