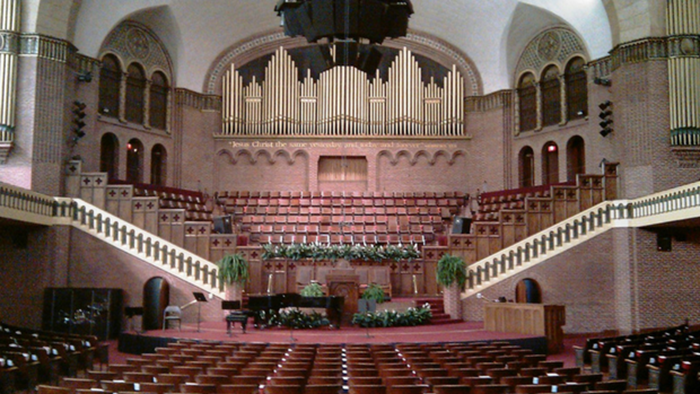 For the past year I have had the privilege of serving as interim teaching pastor at Moody Church in Chicago. It’s been a fascinating experience and I am continually amazed at the people there and the legacy of the church. But having worked as a pastor in different contexts and watching trends and challenges that churches face, I can say with full conviction that when a church goes through a time of leadership transition, it can be difficult.

I’ve served as an interim for six different churches, from 9000 members to 35 people attending on a Sunday. Sometimes, the interim has been just serving a healthy church; sometimes, it’s been in a time of much tumult.

How a church goes through that time can determine a great deal about its future. As the key leader of the church, the pastor is a key to church stability, so when there is not a pastor in place, it can give rise to issues that require a pastoral heart, head, and hands. The time between pastors can test the mettle of the church. This time can certainly be a hurdle, but it can also be a ramp.

When a pastor leaves (or retires from) a church, it is common for the lay leaders to find someone to fill in until a new pastor is chosen. This is called an ‘interim’ pastor. The origin of the word ‘interim’ is a Latin term meaning ‘meanwhile’. Although it is easy to be discouraged when a good pastor leaves, the fact that there is an interim means there is an expectation that the church is not done.

I don’t know if there has ever been research on it, but my observation has been that the average time a church spends without a pastor is 6-18 months. During this time, most churches will try to install an interim. There are various types of interim pastors; let me share three of the most common types that I’ve seen, and a couple of partners that can assist the interim.

When someone hears the phrase, ‘interim pastor,’ most people think of a leader who comes in simply to keep things going until the new pastor arrives. This type of interim basically preaches on Sunday morning as the rest of the church continues with leaders in place. Some churches and denominations have a fairly smooth process for installing a new pastor and may just need someone to lead during the time that it takes the new pastor to sell a house, move, etc. This interim may be a lay leader within the church who has some pastoral background. A standard interim may be so for a few weeks to a couple of months.

Such an interim is to ‘fill in the gap’ by preaching on Sundays, overseeing the care ministries of the church, and maybe assisting the search committee. This interim may be pastor-now-professor, a local retired preacher, or an evangelist who is not looking to take on a pastorate, but also does not want to see a church flounder during the transition time. This interim often has a chaplain’s heart and approach and is not there to stir anything up, but to nurture along the way to the next stop in the church’s journey. This interim may be in place for a few months up to a few years. (The shortest interim I did was for three months. The longest was for two years.)

The teaching interim is a pastor who primarily uses the role in the pulpit as a way to preach/teach biblical principles that will strengthen the church and sharpen its focus as it prepares for the next leader. This interim will not be involved as much in the day-to-day workings of the church, but neither is this interim just filling in until the church gets their next pastor.

The teaching interim is very clear about the mission of the church and drives the message with passion from the pulpit since preaching is almost the only role. The teaching interim usually has experience as a pastor. This teaching often helps clarify vision for the congregation and search team.

This is what I am doing at Moody Church. When I began, I was new at the Billy Graham Center and knew I could not provide much leadership at Moody Church, so when they asked me to be interim teaching pastor, that worked for me at that time, and I agreed.

However, in preaching, I’ve often mixed up a few things that may help them prepare for a new pastor. For example, I’ve made a point of preaching creatively, using props, mixing up pulpits, and not always wearing a tie. Simply put, my desire is to introduce approaches that the next pastor may use— preparing that person for change.

Most of my work has been as an intentional interim and this is what I usually do.

An intentional interim isn’t just watching the flock until the next shepherd arrives. The intentional interim is there to prepare the church for the next season of its life by making some intentional changes. This interim may have a background not just as a pastor, but as a pastor of turnaround churches. When I serve in a roll like this, I’m looking to help the churches consider what changes they need to make, and then help to make those changes.

This interim may be involved in conflict resolution within the church, strategic planning, team building, staff assessment, etc. This type of interim is valuable, especially if a church has not experienced change in quite some time. This interim will likely be in place for around a year to implement various stages of assessment and enhancement or healing.

In the times I have served as an intentional interim, the church often stops looking for a senior pastor during that season. (For example, saying, “We are going to pause the process for a year, get focused on a few things, and then restart the process.)

Either way, the intentional interim is the most hands-on approach.

Partners to an Interim

There are a couple of partners who can help with the interim by coming alongside. I’ve often used others to help me lead and make changes during an interim. Sometimes, people on staff do this, but I’ve often used people outside (either an interim facilitator or a coach) during the interim.

The interim facilitator works with an intentional interim pastor. While the interim pastor focuses on the spiritual development of the congregation as it opens the next chapter of ministry, the facilitator works more on the logistics of helping the churches address organization issues. Think of this as more of an administrative role in the process. For example, budgets need to be addressed, staff functions evaluated, and more. That doesn’t make it unspiritual, but it is more the nuts and bolts issues that need to be addressed.

Coach during the Interim

Coaching is another ministry that is tied to the interim process. Sometimes, the coach is someone who works for the interim, or sometimes just for the church. Also, the coach can help the church transition from interim to new church. So, instead of leaving a church as soon as a new pastor is in place, coaches help provide continuity and stability as a new pastor arrives to complete the transition.

What’s Best for Your Church?

There isn’t one type of interim that is best for all churches. Each type of interim brings something specific to the table. The key is to determine which is best for your church to take it to the next level of ministry and mission. For many, the term ‘interim’ brings to mind negative feelings of waiting. However, this critical ‘meanwhile’ time may actually be what many of our churches need to jumpstart a new passion for gospel proclamation and witness.

At Moody Church, we’ve been saying, “Moody Church is not on pause; it’s on mission.” That’s a key theme I share at all churches where I serve.

The church is not the pastor and the pastor is not the church. As such, the ministry of the interim is key to keep that church on mission.

Join the conversation on Facebook
Tags:
None
Posted:
August 1, 2017