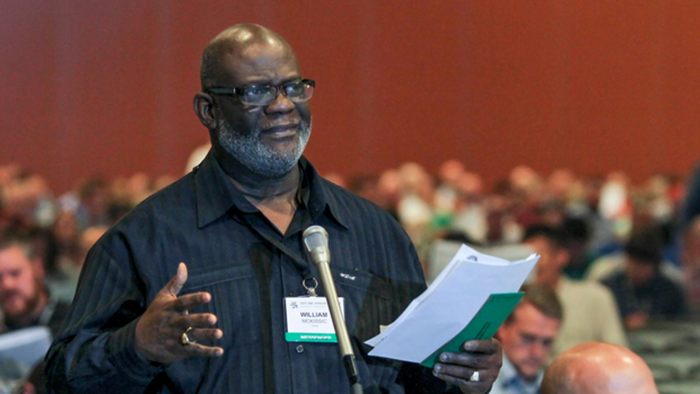 Image: Van Payne
Texas pastor Dwight McKissic moved to bring his proposal on the “alt-right” to messengers on Tuesday (June 13).

Here are three things you need to know about what’s happening in Phoenix, and some path forward to get to that right resolution.

First, there is not some alt-right wing at the SBC arguing the other side of this motion. The issues were around what the committee considered poor wording of the submitted resolution.

Now, I don’t think that’s enough of a reason, and I imagine that by this afternoon the SBC will agree. The committee had the power to reword the resolution, and should have, because Southern Baptists need to speak to this issue.

Nobody here is defending the alt-right, a mix of far-right groups with significant ties to white nationalism. The alt-right is antithetical to the Christian gospel, as I explained in my tweet. 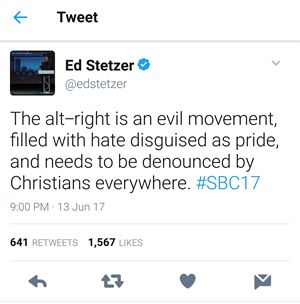 Yet, nobody here in Phoenix is saying, “I don’t want this resolution to offend my alt-right friends.” If they did, every Southern Baptist I know would encourage them to call their alt-right friends to repentance, get some new friends, and grow a backbone.

I’ve seen the tweets and comments from people so quick to bear false witness that Southern Baptists are trying to decide if they are in favor of the alt-right or White Nationalism, and that’s simply lying about the discussion that is taking place.

I’m not saying that such people are not out there—they are—but it would be very unlikely that many are here, in Phoenix.

Second, the process has not helped, leading to wrong conclusions about what is going on and who Southern Baptists are.

Are there racist Southern Baptists? Sure.

But the Southern Baptist Convention actually changed its doctrinal statement to include racism as a sin. It’s repenting of slavery and racism, and has made great strides. For example, there are more non-white SBC churches than there are ELCA churches (mainline Lutheran) in the United States. And about 58 percent of the new churches added to the Southern Baptist Convention in 2013 and 2014 are reported to be minority congregations.

In addition, the conference I spoke at on Monday (the pre-conference to the national convention) elected officers, including an African-American president, who was unanimously elected (by cheering).

So, (we) Southern Baptists have a long way to go (denominational elections are easier than speaking to systemic injustice, for example), but it’s simply incorrect to say this is a debate of whether Southern Baptists are for or against White Nationalism.

Nobody at #SBC17 has come to a mic to defend white nationalism, white supremacy, or the alt-right. Not a one. But more needs to be said!

So, the question is how and if they should speak up, and this is where it gets harder.

Third, some Southern Baptist leaders were quick to make statements and throw out tweets decrying racism, which is great, but this is about the alt-right, not generic racism.

I tweeted about this last night, explaining we need specificity in this cultural moment. 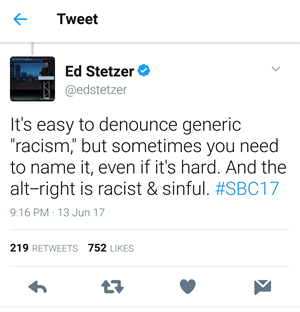 For example, I don't think many Southern Baptist pastors and leaders were actually advocating for those Birmingham fire hoses I mentioned earlier. But their silence was seen as complicity with the racists.

And this is an opportunity to speak and the Resolutions Committee should have redone the resolution rather than reject it. They made a mistake, but an easy one to make, because Southern Baptists have addressed the sin of racism many times.

But we make a bigger mistake when we stay silent while our African-American brothers and sisters are asking what we are thinking.

I’m thankful for the good work of an excellent group in that Resolutions Committee. But it’s time to say, “We have a better/recorded/updated resolution that clearly condemns the alt-right and white supremacy, and we want the SBC to adopt it unanimously.”

The Resolutions Committee will bring that resolution forward this afternoon at 2:45PM Phoenix time, and the SBC will be a better place for having done so.

The world is watching, sure, but more importantly, so is a dark-skinned Middle Eastern Jew who died on the cross for all people.

The Resolutions Committee has posted the new revised version of the resolution, and I thank them for their humility in reworking it. I look forward to its overwhelming adoption on the floor of the SBC today.

ON THE ANTI-GOSPEL OF ALT-RIGHT WHITE SUPREMACY

WHEREAS, Scripture teaches, “From one man [God] has made every nationality to live over the whole earth and has determined their appointed times and the boundaries of where they live” (Acts 17:26); and

WHEREAS, The Psalmist proclaimed, “The earth and everything in it, the world and its inhabitants, belong to the LORD” (Psalm 24:1); and

WHEREAS, The Apostle Peter said, “God doesn’t show favoritism, but in every nation the person who fears Him and does what is right is acceptable to Him” (Acts 10:34–35); and

WHEREAS, Our justification before God is based on faith in Christ Jesus alone and not in our ethnicity (Galatians 3:27–28); and

WHEREAS, Scripture proclaims that Jesus is purchasing by His blood believers “from every tribe and language and people and nation” (Revelation 5:9); and

WHEREAS, Throughout eternity we will gather with a “multitude from every nation, tribe, people, and language” in worship of our risen Savior (Revelation 7:9); and

WHEREAS, The Baptist Faith and Message conveys that all Christians are obligated to make the will of Christ supreme in their own lives and in human society, opposing all forms of racism, selfishness, and vice, and bringing government and society as a whole under the sway of the principles of righteousness, truth, and brotherly love; and

WHEREAS, We know from our Southern Baptist history the effects of the horrific sins of racism and hatred; and

WHEREAS, In 1995, the Southern Baptist Convention repudiated “historic acts of evil, such as slavery,” committed “to eradicate racism in all its forms from Southern Baptist life and ministry,” and “genuinely repent[ed] of racism of which we have been guilty, whether consciously or unconsciously”; and

WHEREAS, In recent years the Convention has nominated and elected individuals from a variety of ethnicities, including electing our first African-American president in 2012; and

WHEREAS, In recent resolutions the Southern Baptist Convention called on “all Christian men and women to pray and labor for the day when our Lord will set all things right and racial prejudice and injustice will be no more” (2014); expressed continued grief “over the presence of racism and the recent escalation of racial tension in our nation” (2015); and urged fellow Christians to discontinue using the Confederate battle flag, acknowledging that it is “used by some and perceived by many as a symbol of hatred, bigotry, and racism, offending millions of people” (2016); and

WHEREAS, B&H Academic recently published Removing the Stain of Racism from the Southern Baptist Convention, highlighting our continuing need to root out vestiges of racism from our own hearts as Southern Baptists; and

WHEREAS, Racism and white supremacy are, sadly, not extinct but present all over the world in various white supremacist movements, sometimes known as “white nationalism” or “alt-right”; now, therefore, be it

RESOLVED, That the messengers to the Southern Baptist Convention, meeting in Phoenix, Arizona, June 13–14, 2017, decry every form of racism, including alt-right white supremacy, as antithetical to the Gospel of Jesus Christ; and be it further

RESOLVED, That we denounce and repudiate white supremacy and every form of racial and ethnic hatred as of the devil; and be it further

RESOLVED, That we acknowledge that we still must make progress in rooting out any remaining forms of intentional or unintentional racism in our midst; and be it further

RESOLVED, That we earnestly pray, both for those who advocate racist ideologies and those who are thereby deceived, that they may see their error through the light of the Gospel, repent of these hatreds, and come to know the peace and love of Christ through redeemed fellowship in the Kingdom of God, which is established from every nation, tribe, people, and language.

Join the conversation on Facebook
Tags:
None
Posted:
June 14, 2017

1 of 3
Members of three advisory councils - African American, Hispanic, and Asian - joined in a panel discussion of the significance of ethnic groups within the Southern Baptist Convention.

Southern Baptists, Racism, and the Alt-Right: It's ...