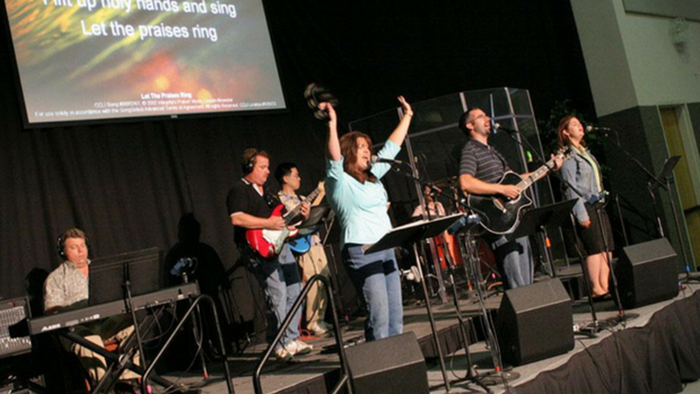 Image: David Ball
One of the new initiatives I wanted to bring to the Billy Graham Center at Wheaton College is an expanding engagement with research that endeavors to help strengthen and sharpen the missional and evangelistic work of the church. Michael Lee, Ph.D., is the lead researcher on one such research project, “Entrepreneurial Evangelicalism,” which seeks to identify key innovators and their ministry innovations and explore the means and pathways of diffusing these innovations into mainstream evangelicalism during the mid-1980s to about 2010. You will hear more from Michael in the months ahead.

In the past half century, perhaps no other Christian ministry innovation has been more influential and polarizing than contemporary worship. It has been maligned, celebrated, blamed for church splits (especially during the “worship wars” of the 1990s), credited for congregational growth, accused of fostering shallow, religious consumerism, praised for catalyzing spiritual revitalization among individuals and movements, and so forth. Another example of its contemporary significance is how worship commonly delineates one Christian community from another. Arguing that the choice of worship style has become as defining marker of evangelical communities and functions as a veritable ichthus, Greg Scheer posits:

…denominational loyalty has all but eroded, replaced by music style. It used to be that a family would move to a new town and look for the nearest Baptist or Episcopal church, but now they look for the nearest ‘contemporary,’ ‘blended’ or ‘emerging’ church. And how do they know that the Methodist church down the road is an Evangelical boomer community? Because it advertises a ‘contemporary’ service (95).

In part one of this short series exploring research related to the diffusion and influence of the contemporary worship, I will point to some recent findings as it relates to current congregational practices and correlations to congregational growth.

But before we get to the research findings, we begin with the arduous task of defining what we mean by “contemporary worship” (let alone the confusion about what worship means!). In their forthcoming book, Lovin’ on Jesus, Lester Ruth and Swee Hong Lim provide a helpful and concise history of contemporary worship (to which they mean more than just music). While contemporary worship has changed significantly since its early development, which can be traced back to at least to the Jesus Movement in the 1960s, Ruth and Lim identify nine defining qualities that characterize and lend continuity to this liturgical phenomenon:

If these nine characteristics embody what we mean by contemporary worship, using Everett Rogers’s seminal conceptual framework for understanding how innovations are diffused, we might say that historically, the Jesus People were the innovators, “New Paradigm Churches” like Calvary chapel were the early adopters, and megachurches like Willow Creek and their teaching networks catalyzed mass adoptions among early and late majority adopters.

For over 15 years, national congregational studies like the National Congregations Study (NCS) and Faith Communities Today (FACT), have used characteristics like informality, use of electronic technology and instruments common to contemporary popular music, to track the mass adoption of contemporary worship within a growing number of American congregations, and not just Christian congregations (FACT studies are trans-faith and weighted to be representative of all participating faith groups).

For example, the bar graph on the right, which is from the NCS III (fourth wave is in the works), summarizes the changes in worship practices among congregations from 1998 to 2012. Listed as one of their “most important observations,” Mark Chaves and his team concluded that “worship services have become more informal and expressive.”

Besides the rapid increase in the adoption of contemporary worship forms over the past 15 years, which will probably not come as a surprise to anyone reading this, more interesting are the conclusions offered in numerous iterations of the FACT studies that the adoption of contemporary worship is correlated to congregational growth and vitality. Here are some excerpts from several studies.

A Decade of Change in American Congregations 2000-2012 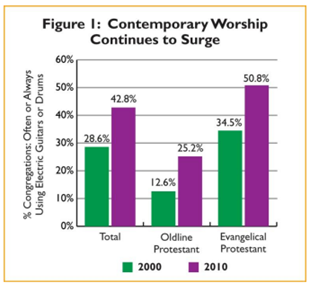 “Congregations that have adopted innovative worship and contemporary worship styles are significantly more likely to have grown in the last five years. However, this relationship is strongest among Oldline and Conservative Protestant congregations and is not significant among Roman Catholic, Non-denominational and historically Black Protestant families. Contemporary worship seems particularly important in attracting young adults.” 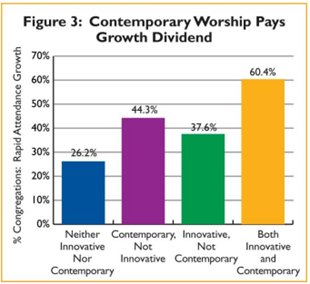 “…generational changes in music tended to make much “traditional church music” unappealing to young adults. In response many congregations over the last quarter century found that changing to more contemporary forms of worship was a stimulus to growth. The boost to growth from innovative worship is evident in Figure 9.” 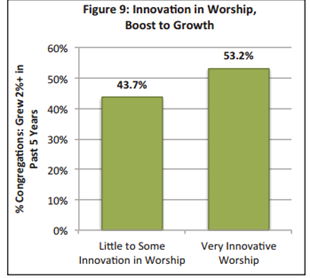 Join the conversation on Facebook
Tags:
None
Posted:
March 18, 2017