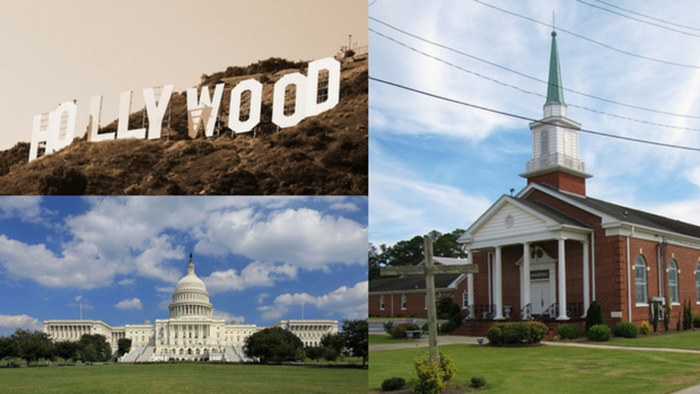 Unless we’ve been hiding in a box, most of us have started noticing a trend in our twitter feeds and daily news headlines: sexual harassment and assault have been running rampant. And it is far beyond Hollywood and Harvey Weinstein, though he seemed to open the floodgates.

It’s also happening in our nation’s halls of power.

The latest, Congressman John Conyers, is a member of the Democratic Party who chose to step down from his seat on the House Judiciary Committee after being accused of sexually harassing a female member of his staff several years ago.

It’s evident that partisan politics simply don’t matter here. When it comes to the mistreatment of women, men on both sides of the aisle are to blame. Women are trying to speak out against these abuses, but certain politicians seem eager to make this about party allegiance instead of victim protection.

This Sunday on NBC’s Meet the Press, House Minority leader Nancy Pelosi discounted the accusers in a widely-panned interview—an interview from which she quickly backtracked. But in the moment, instead of speaking out against sexual harassment, she decided to remark on the importance of due process and to pay compliments to Congressman Conyers, a member of her party, for all he’s done over the years to “protect women.”

And if this sounds familiar, that’s because it is.

Many remember that after Alabama Senate candidate Roy Moore was recently accused of child sexual assault, some (even most) Republicans were quick to condemn his alleged behavior.

For that I am thankful.

President Trump recently came to his defense, repeatedly arguing to reporters that Moore was denying all the accusations. He also made a conscious effort to point out that the Senate does not need another “liberal person” like Moore’s opponent, Doug Jones, in office. And it appears that many voters may be swayed by this argument that the most important issue in play is holding onto majority control.

But that’s missing the point of this moment. It’s not about who is in the Senate. It’s about serious and credible allegations of child abuse.

Our First Priority Is Not Protecting People of Power

These messages are clear: Americans should place their trust not in the multiple women who claim to have been victimized, but in the innocence pleas coming from powerful men.

Institutions are at stake, they say. Majorities need to be kept. Or they they are doing such good work. Or people’s jobs will be lost. Or whatever.

This, friends, is the wrong message for a number of reasons.

Let’s be clear, I understand that many find themselves hesitant to criticize men like Moore when we don’t know all the facts. Believing in a person’s innocence until he or she has been proven guilty is an important legal principle that is at the very bedrock of the American justice system. For this, all of us should be thankful.

That being said, our priorities must be kept straight: when women and girls are mistreated, our primary concern must not be first to protect the reputations of potential perpetrators and their institutions. In most cases, their day in court will come, and rightfully so. Our first response before bringing anything else into the discussion is this: listen to those who have been victimized and give them the freedom to speak up. And be willing to believe people who are sharing their pain.

When a crime is reported, call the police. And, when allegations are credible, take action.

And if institutions (Hollywood, politics, or church) are building walls to protect those who abuse at the expense of those who have been victimized, we need to take those institutions apart… brick by brick.

Too many political leaders, right and left, worry about the stability of their respective political parties and spend their days carefully counting congressional seats. Everybody wants to either gain or maintain a majority. But when the partisan scorecard becomes more important than everything else, we’re selling our souls on both sides. One party may win, but the real losers are those who have been victimized, because we have communicated that their pain will never matter as much as that congressional seat.

Despite our concern—however legitimate—regarding upcoming election results, we should heed the words of none other than Kellyanne Conway, who reassured us that “there is not a Senate seat that is worth more than a child.”

She was right then.

That’s why Roy Moore should step out of his race, but also why Al Franken should step down from his seat, and so should John Conyers. Being in Congress is not a right, and credible allegations (or actual admission, in Franken’s case) mean you need to step down or away for an investigation.

When we compare the importance of protecting political institutions to our need to care for those who are abused, the latter should win every single time. Any institution—political or not—that fails to do this and instead tries to protect abusive men at the cost of ignoring women who have been victimized must not just be confronted, but either eliminated or given a complete overhaul.

Sound radical? Probably so, but as we have observed, what has been done thus far does not seem to be working, as the number of men accused of sexually exploiting women continues to grow.

And, if you (like me) have talked to some of your colleagues recently, you know such harassment is everywhere.

Institutions across the country, whether they’re responsible for policy creation or film production, need to spend some time in self-reflection, considering where their priorities are. Do they side with those who have been victimized, or defend perpetrators?

They need to consider their long-term goals: Do they concern themselves with prevention, or only look to cover up incidents of abuse as they bubble to the surface?

Churches Are Complicit, Too

Believe it or not, each and every church is going to have to both ask and answer this same set of questions. If we want to be places that embrace the contributions of women, value their giftedness, and encourage them to tell their stories, we need to start by confronting the ways we too have become complicit with cultural norms and narratives. (In a guest post, my director of communications shares more on this issue.)

If we truly want to see the tide change as we say we do, it’s time for us to act. And pastors and church leaders, it starts with you.

In abuse situations, let the police investigate. (Read the interview with my sister-in-law, who prosecutes child sexual abusers.)

It’s not easy, but it is necessary.

At the end of the day, the mistreatment of women isn’t just a Hollywood problem or a Washington D.C. problem. It’s a people problem, rooted in humankind’s proclivity towards sin, power, and control.

Instead of choosing to see women for who they are—people made in the image of God—men too often choose to objectify and exploit them. It won’t stop as long as we protect them and their institutions more than those who have been wounded.

And the church has a long way to go, based on the #ChurchToo hashtag, which built on #MeToo.

The spectrum of sexual exploitation is wide, but it all points back to this: until we are willing to confess our part in the problem and repent, the church is just as complicit as any other institution.

That being said, merely acknowledging the part that human sinfulness might play in recent events doesn’t guarantee that circumstances will change either. The reality is this: if the culture stays as it is and leadership structures in Washington D.C., Hollywood, and our churches continue down their current path, women will continue to experience abuse.

This cannot be tolerated. And if those brick walls hide abusers, we have to take them down—brick by brick.

If we believe in the worth and dignity of all human beings—both male and female—as image bearers of the living God, then we know full well the work that must be done. From here on out, we must insist on no more hiding, no more cover ups, and no more prioritizing institutional health over individual needs. Both in our churches and in our nation’s highest levels of power.

Brick by brick, until the truth is known and seen.

Join the conversation on Facebook
Tags:
None
Posted:
November 28, 2017