While the core of scriptural truth remains the same from culture to culture, the outworking of those truths is much more fluid.
Rochelle Scheuermann 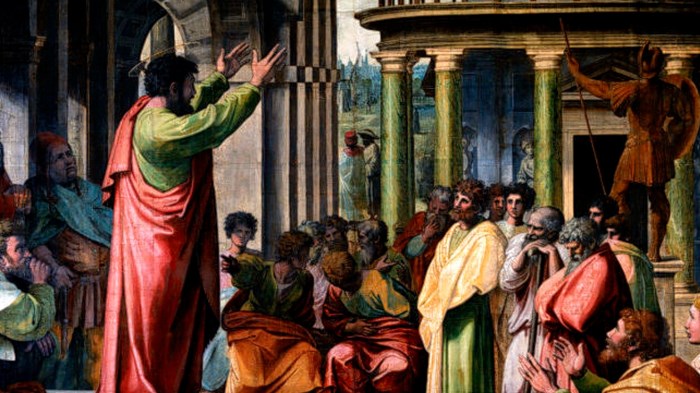 Image: via Wikimedia/PD-US
Although it’s been a number of months, we continue in our series on biblical preaching. We have asked some teachers, preachers, and scholars to consider preaching, interact with it, and contrast some different approaches.

Today, we welcome Dr. Rochelle Scheuermann. She is Associate Professor of Evangelism & Leadership and serves as Director of the Masters in Evangelism & Leadership program. Prior to coming to Wheaton, Dr. Scheuermann served as Program Director & Associate Professor of Intercultural Studies and Vice-President of Academics at Lincoln Christian University.

Her Ph.D. dissertation is fascinating (and directly connects with the topic of the series). She looked at the preaching approaches of Tim Keller, Rob Bell, and Father Michael Pfleger, and she draws from her dissertation to help us consider culture and preaching.

“What is biblical preaching?” inspires a host of responses. Among the answers there is a strong emphasis on correct exegesis of the biblical text with a lesser, but still prominent emphasis on contemporary application. But so often these two sides of preaching – text and context – remain separated. Text is always first—it is objective, ordered, and culture-free. Context is always second – it should only come into play after exegesis, providing a contemporary landing point for the text.

But can these ever be separated so completely? More importantly, should they?

I first questioned the role of culture in the preaching task not long out of college. The answers I found were inconsistent and ultimately unsatisfactory. After ministering in a variety of cross-cultural contexts and co-authoring a preaching textbook that was translated into multiple languages, my questions became more focused and more urgent.

I decided to do in-depth research on the role of culture in biblical preaching. After reading, listening to, experiencing, dissecting, comparing, contrasting, and studying sermons from three preachers located in different U.S. settings (Southside Chicago, Suburban Grand Rapids, and upper Manhattan), I came to a new understanding of and appreciation for the relationships between preaching and culture. Here are a few of my conclusions.

First, there is no such thing as culture-free biblical exegesis.

As much as we’d like to think we can objectively uncover the meaning of a biblical text, this just isn’t possible. Not only are we unable to separate out culture from our own thought processes, Scripture itself was not meant to have one and only one interpretation – even when there are clearly themes, messages, and meanings that are intended and universal to all people of all times.

Our biblical exegesis is always done with the goal of “dynamic application of the text to one’s current needs…” (Osborne 2006, 410). But it’s not that we just tell a static story in culturally-specific ways. The story itself is “too pregnant with meaning to be confined to a single set of terms or images, or to one way of telling the story” (Flemming 2005, 297).

That we have four Gospels is proof enough of this. Vanhoozer argues that it is “hermeneutically incorrect to claim that one’s interpretations are immune to cultural conditions and hence applicable to all times and places” (2006, 95) and says that “No one performance of the biblical script serves as either template or paradigm for all others. The Word of God is absolute; not so the interpretations of men and women. Western and non-Western theologies are equally regional, not universal, performances” (2006, 117). If this is true of theologies, how much more so of sermons.

When we only live and work within one culture, such statements can seem frightening; however, missionaries and missiologists have wrestled with the cross-cultural nature of the gospel for decades and what they conclude is this: the global Christian community provides hermeneutical integrity to the church because hearing Scripture through the voices of people from all cultures is a means for accountability and deeper understanding of the Word (see Hiebert 1987, 110).

To test this out, I placed sermons on the same scriptural text side-by-side in order to discover how each preacher approached the text in dialogue with contemporary culture. The similarities and stark contrasts beautifully illustrate the consistent and robust nature of the text.

God’s Word is unchanging, yet there are local expressions and understandings of Scripture that are not only faithful to the intent of Scripture but also relevant to the lived experiences of the people receiving the message. It’s not “either/or.” It’s “both/and.”

Every Sunday, preachers are preaching biblical sermons on the same text—and no sermon (or exegesis) is 100% the same. If they were, we’d all be out of jobs—or at least have easier jobs. Preachers’ complimentary approaches to similar texts and themes prove that a “chorus of different voices” (Flemming 2005, 297) produce “relatively local expressions of something universal, cultural incarnations of a transcultural reality” (Vanhoozer 2006, 117).

Lest one make an incorrect conclusion, it should be explicitly stated here that we are not passive subjects of culture, nor is the gospel. Walls (1996) and Sanneh (2003) both argue that the biblical message is for every culture and challenges every culture.

Because of this, the Bible (and the Christian message presented by means of the preacher) is the active agent: (1) embracing some aspects of culture, which allows it to be at home among any people of any age at the same time, and (2) calling people toward transformation, challenging cultural norms and drawing Christians—from any people and any age—toward each other in unity under the reign of Christ. (Walls refers to these as the indigenizing and pilgrimage principles.)

Second, culture can be used strategically to affirm Scripture and to collaborate with Scripture in critiquing culture.

Preachers in the 21st century face two huge challenges: (1) getting people who reject meta-narratives to consider the Bible as truth and (2) bringing a critique against culture in a society in which intolerance is the greatest of sins and the plurality of beliefs and practices around us are simply a matter of individual conviction.

The good news is that missiology has wrestled with such dilemmas when considering how to talk about sin in other cultures and how to gain cultural understandings necessary for making appropriate cultural critiques. What we learn from missiology is that cultural awareness allows preachers to appropriate cultural elements the audience knows, respects, and believes and have these elements corroborate Scripture and participate with Scripture in the critique of a faulty aspect of culture.

Using culture to affirm and assist in the explanation of Scripture serves at least three purposes.

First, it provides credibility to the text among those who are predisposed to reject a single, overarching truth for life.

Second, it shows that preachers recognize and take seriously cultural sources that are important to audiences while simultaneously demonstrating the universal truth of Scripture that shows up in and is applicable to all aspects of culture. We can assume this also enhances the credibility of the preacher.

Third, preachers can enlist culture in “stalking” their audience. Make the right connections with contemporary life, and every time your listener encounters that particular thing within culture, the sermon gets preached to them again, and again, and again.

But not only can we use culture to explain, affirm, and illustrate Scripture, but culture, itself, can be enlisted in our critique of culture. People are naturally defensive when confronted, but this does not give us an excuse to avoid difficult topics. Biblical preaching, at times, will confront people with the stark reality of their sinfulness and the fallenness of their culture.

Where head-on attack will often meet all-out resistance, strategically using culture allows preachers to bring biblical critique to aspects of culture and self that might otherwise be off-limits by using “cultural references and authorities… listeners trust” (Keller 2006). Nathan did this when confronting David about Bathsheba.

Nathan “told a story designed to get David’s own inner sense of right and wrong passionately engaged” and used “David’s conscience to work collaboratively with [Nathan’s] external pronouncement of sin and judgment” (Priest 1994, 292). Using culture in this way, preachers create sufficient distance from the critique to allow listeners to become engaged with it to the point of agreement before they ever realize they, too “are the man” (2 Sam. 12:7).

Third, preaching is not preaching unless text and context meet and intermingle.

John Stott (1982) helpfully describes preaching as a bridge-building endeavor with the sermon bridging the chasm between the biblical text and the contemporary context. To have integrity, the bridge must be firmly anchored on both sides.

Too much on the biblical side and you never reach the real world where people live, eat, breath, sleep, and work. Too much on the contemporary culture side and you build a bridge to nowhere, never bringing people over to engage and interact with God’s Word. It is the combination of faithfulness to the biblical text and sensitivity to the contemporary word that makes preaching preaching (Stott 1992).

But this meeting and intermingling of text and context is not arbitrary or for entertainment: our goal is to help people hear God’s voice and obey him (Stott 1992, 208). Good preaching doesn’t just leave people where they are.

Good preaching causes God’s people to obey Him. Preaching that expounds on God’s Word but leaves no contextual challenge for people to be changed and moved is not biblical preaching. Our goal for preaching should ultimately be to bring others along in obedience to Christ.

Obedience might look different between cultures and generations; however, lest you fear Paul’s admonition against “preaching what their itching ears want to hear” (2 Tim 4:3) is being ignored, hear me out. Scripture yields truths that are universal and supracultural, and so the core of obedience is the same across all cultures and throughout history. But while the core remains unmoved, the outworking of the core is more fluid.

What we’re looking for is “meaningful obedience” (Stott 1992, 206). For example, we know Scripture teaches against theft and lying and toward honor of parents, but how we define theft, lying, and honor of parents is much more cultural than universal. This returns us to Walls’ principles of indigenization and pilgrimage.

The scriptural truth behind obedience is universal, but the outworking of how Scripture manifests in the lives of the hearers, at times, will be more culturally-specific. It’s only in the dance between text and context that we achieve this.

John Steinbeck (1980, 268) once said “If the story is not about the hearer, he will not listen. And here I make a rule – a great and interesting story is about everyone, or it will not last.” The Christian story is intended to be about everyone, but it is possible to preach it in such a way that people do not recognize that it is about them.

Sanneh, Lamin O. 2003. Whose Religion is Christianity? The Gospel Beyond the West. Grand Rapids, MI: Eerdmans.