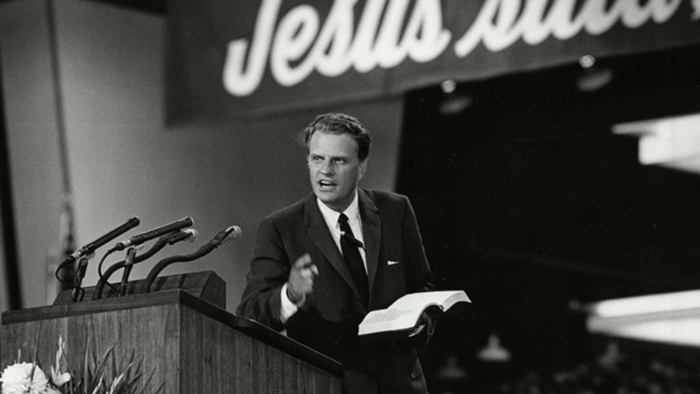 Image: Billy Graham Center Archives
This week, many of us will be sharing tributes regarding Rev. Billy Graham. A few years ago, I gathered a few such tributes in light of what we all knew would happen—Graham’s homecoming.

Here is such a tribute from Carl Ellis, Jr. with Karen Ellis. Carl is Assistant to the Chancellor, Senior Fellow of the African American Leadership Initiative, and Provost’s Professor of Theology and Culture at Reformed Theological Seminary.

When I was a young campus minister working with Tom Skinner Associates, I had the honor of meeting Dr. William Franklin Graham twice. I remember him as an approachable man, not given to living out the greatness of his own press. I actively participated in his evangelistic crusades whenever they were in or near my city, and I would do so again today without hesitation.

Although several of Dr. Graham's early Southern crusades were racially segregated, he came to see segregation as inconsistent with the gospel. In the early 1950s, he began refusing to speak in some segregated auditoriums. Before the start of the 1953 Chattanooga Crusade, he personally took down the ropes intended to enforce segregation, telling two of the ushers, "Either these ropes stay down or you can go on and have the revival without me." [1]

Yet after that, he acquiesced to preaching in segregated venues in Asheville, North Carolina, and Dallas, Texas. At times, Rev. Graham made statements that seemed to reveal a lack of awareness of the connection between segregation and sin. At other times, he forcefully condemned White racism. By the mid-1950s, he courageously and consistently defied Jim Crow laws by insisting that all crusades be conducted on a non-segregated basis.

At the 1957 New York Crusade, Graham welcomed Thomas Kilgore and Gardner Taylor (both African American Pastors) onto the crusade's executive committee, [2] and openly called for "anti-segregation legislation." [3] He also had Dr. Martin Luther King, Jr. join him in the pulpit at the crusade.

I am deeply grateful to you for the stand which you have taken in the area of race relations. You have courageously brought the Christian gospel to bear on the question of race in all of its [urgent] dimensions. I am sure you will continue this emphasis in all of your preaching, for you, above any other preacher in America can open the eyes of many persons on this question. Your tremendous popularity, your extensive influence and your powerful message give you an opportunity in the area of human rights above almost any other person that we can point to. Your message in this area has additional weight because you are a native southerner. I am delighted to know that you will be conducting a crusade in Charlotte, North Carolina on a non-segregated basis. This is certainly a great step. I hope you will see your way clear to conduct an evangelistic crusade in one of the hard-core states in the deep south, even if it is not on as large a scale as most of your crusades. The impact of such a crusade would be immeasurably great. [4]

Although they had some differences, a warm friendship developed between Dr. King and Dr. Graham–a friendship that endured intense stresses. Partly because of Graham's resistance to segregation, the 1958 Charlotte crusade attracted record numbers of African Americans. [5]

In many ways, Billy Graham's record on race relations was exemplary–especially in the area of personal and business relationships. For example, with the addition of Howard Jones to his team in 1960 and Ralph Bell in 1965, Dr. Graham began adding African American associate evangelists long before it was fashionable to do so.

It must be noted, however, that Dr. Graham never took an active or visible role in civil rights demonstrations, stating that the key to solving the problem of racism lay in redeeming the human heart through the power of the gospel of Christ. While this is certainly true, his lack of visibility in civil rights marches led some African Americans to perceive him as unconcerned about this issue.

As a Bible-believing follower of Christ, I believe that part of the discrepancy in perception stemmed not from Billy Graham's heart or from a lack of commitment to racial harmony, but from the nature of the evangelical theological outlook he inherited.

Thus, evangelicals tended to put a greater emphasis on personal doctrine than on crucial subdominant cultural concerns, such as social ethics.

It seems, then, that as a son of the South, Dr. Graham's commitment to civil rights came in fits and starts. As his ethical consciousness grew, Graham found himself swimming against the prevailing tide of Southern segregation. His was not a Pauline 'Damascus road' conversion, but a more plodding and progressive Timothy-like transformation.

One thing is sure: Dr. Graham learned early on that ethics and epistemology could not be divorced–to remove the ethical hand from the epistemological glove was to compromise the gospel he was so well known for proclaiming.

Further, given the evangelical culture's shortcomings in the area of social ethics, Billy Graham stood out as a man of integrity. In light of recent moral failures of some evangelical leaders, Dr. Graham has left us a great legacy of faithfulness and balance.

Of course, many from subdominant cultures came to a saving knowledge of Christ through Graham's powerful preaching; he will surely be remembered well by each of these souls God touched through him.

Yet our faltering steps do have consequences. I have met some in the older generations who found it difficult to receive the gospel message from Billy Graham, due to his perceived early equivocation on the core issues that affected their communities and family lives most. In such cases, we can be grateful to God for raising up a variety of evangelists and ministers of the gospel.

When great men pass into history's record, those who remain are left to eulogize them. Sometimes they are lionized, sometimes demonized; neither of these accountings is wholly realistic, and no man or woman could stand such scrutiny after their own departure.

Surely, we would all say, whether remembered for good or ill, "That's not quite how it was." As each of us nears our own finish line, we will consider our victories in light of the opportunities missed, the blind spots given sight too late, the words we wished we'd uttered, and those we wish we had not.

In my opinion then, two of the questions Brother Graham leaves us with today in the area of race relations are: "How committed are we to preaching the 'whole council of God' in the context of today's polarized society?" and, "How do our own perceived equivocations regarding matters of biblical ethics and justice hinder others from understanding who Christ truly is?"

We who are left to continue God's Kingdom work on this terrestrial ball can still speak prophetically to the issues of our day; may we also be found faithful and balanced. That is, may our ethical hand be uncompromisingly well suited to our epistemological glove, lest the shortsightedness of our own social outlook obscure the gospel's redemptive call.