Andy Savage’s Standing Ovation Was Heard Round the World. Because It Was Wrong.

It's not an incident. It's abuse.
Ed Stetzer 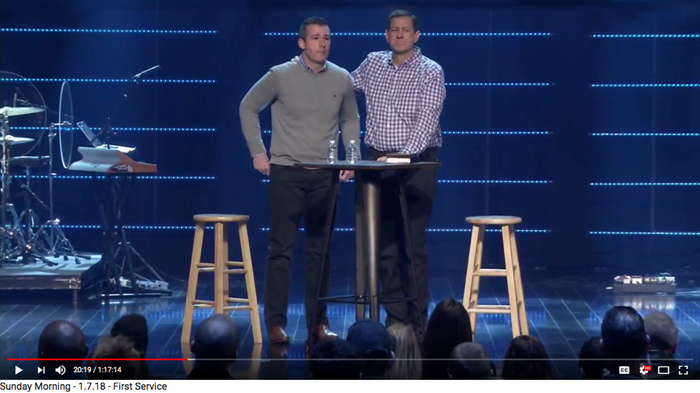 If you are getting weary of more sexual assault allegations coming out every day, you are not alone. The #MeToo campaign is shining a spotlight on widespread misogynistic behavior, ranging from unprofessional to full-scale assault.

As overwhelming as this feels, it pales in comparison to the lives of victims.

Indeed, this movement is upending many of our institutions. TIME magazine announced “The Silence Breakers” as their 2017 Person of the Year. Oprah Winfrey drew widespread praise for her speech at the Golden Globes earlier this week, proclaiming, “The time is up” for sexual harassers.

All of this is good news. These stories are finally coming out of the dark.

As I have written before—and will continue to speak out on—we cannot ignore the stories of these victims, even if we find ourselves numbed by the sheer quantity. The church must lead, not merely follow along, in support of all who have endured abuse, neglect, and injustice.

This is at no time truer than when it hits home. This week it did.

This week, allegations were made against Andy Savage, the megachurch teaching pastor at Highpoint Church in Memphis, regarding an event that took place 20 years ago when Savage was serving as a youth pastor in Texas.

According to his accuser’s testimony, 22-year-old Savage coerced the then 17-year-old Jules Woodson to participate in sexual activity. Woodson reports that he apologized immediately after the incident, asking her to remain silent. When Woodson refused, according to her testimony, the church instructed her to keep quiet.

It’s About The Victims

When Woodson tried to reach out to Savage a month ago by email, she indicated she never heard back. Instead, Savage confessed the “sexual incident” to his church this past Sunday, not denying any of the story and apologizing for his role. In response, the church gave him a standing ovation.

That standing ovation has been heard around the world.

This is confusing on a number of levels. First, no one should ever receive a standing ovation when it comes to alleged abuse—unless it’s directed at a victim with the courage to speak out. When it comes to victimization, the victim should always be the center of our attention. As I wrote in a previous article:

When we compare the importance of protecting political institutions to our need to care for those who are abused, the latter should win every single time. Any institution—political or not—that fails to do this and instead tries to protect abusive men at the cost of ignoring women who have been victimized must not just be confronted, but either eliminated or given a complete overhaul.

The second reason this is perplexing to me is that, as Woodson notes, “He’s lying about how he handled it.” While Savage announced that he apologized to her, her family, and the church, Woodson writes, “He never came to me, the church told him he couldn’t talk to me and they told me I couldn’t talk to him.”

So, not only do we have a questionable standing ovation after a problematic apology, but also accusations that church leadership were and continue to be involved in marginalizing the victim.

As I’ve said before, and will continue until it begins to take root: We are never to protect abusers in our churches. We are to protect victims.

Here’s what I’ve written before:

In the midst of this, it seems another church did just that. Larry Cotton, one of the pastors involved in the original situation two decades ago, is now on staff at Austin Stone Community Church. Austin Stone has placed him on a leave of absence and is pursuing a third-party investigation.

It is important to note this proper response. Rather than a standing ovation, Austin Stone suspended a pastor for his response to this situation in order to pursue an investigation.

Unfortunately, it took Highpoint Church until a few days later to take the same action. Earlier today on the radio, Savage said that he is taking a leave of absence for an investigation by a third party. That’s a good step, though more information is needed about the investigator and the process.

But so much damage is already done—most of all (and most importantly) to Jules, but (again) to the broader Christian witness.

Yes, when the church gave its standing ovation, the congregation did not know the details of the accusations. The church believed the pastor they loved had an experience two decades ago that, they were told, was addressed. And, they applauded.

So, it’s easy to take cheap shots (witness the internet) at the church, but they were applauding based on what they knew. However, and regardless, the standing ovation was a terrible idea that served to accomplish nothing but to teach victims that they won’t be heard.

Today, Andy Savage denied part of the charges, calling the incident consensual. Furthermore, he indicated that he did not break the law—that a 22-year-old can be sexually active with a 17-year-old in Texas, and that this ‘incident’ (his term) did occur, though he denies some of the charges.

But here is the key.

A youth pastor does not have “incidents” with youth group members—he abuses them. On this point, the church needs to speak with absolute clarity: instances such as these are not an “incident”; it’s abuse.

All churches—and those in church leadership—must strive for clarity that says this: victims need to be received, listened to, and cared for by the church. Our churches should be safe havens for those who are victims of abuse—more so when it occurs at the hands of someone in church leadership.

So, again, the church has to be taught to listen to victims. And churches need to learn to respond better. It’s not a PR issue; it’s a justice issue.

And, yes, this is the time for Andy Savage to step aside for an investigation, for the church to listen to the accuser, and then to talk about next steps. Unfortunately, that should have been done before the standing ovation heard around the world.

But the place to start is in calling it what it is when a youth pastor engages in sexual activity with a teenager in the youth group.

Others will debate whether it’s a crime, or whether someone can be restored to some form of leadership after abusing their authority. There’s certainly more to be said and done here.

But, before all that, we should be clear on one thing.

It’s not an incident. It’s abuse.

Join the conversation on Facebook
Tags:
None
Posted:
January 11, 2018

Andy Savage’s Standing Ovation Was Heard Round the World. Because It Was Wrong.

Andy Savage’s Standing Ovation Was Heard Round the ...