I long for the days when Supreme Court judges weren’t viewed as representing a particular ideology.
John C. Richards, Jr. 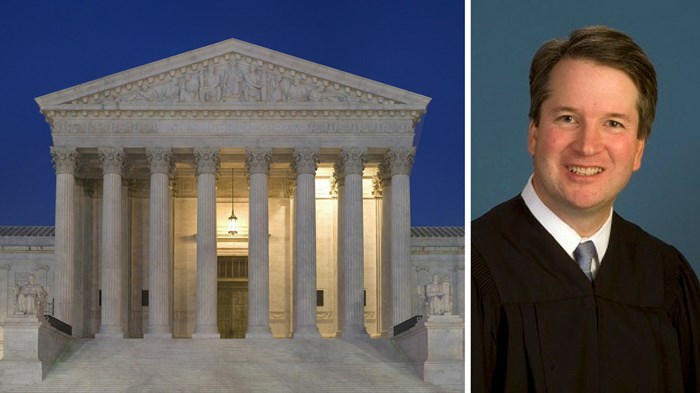 Image: Creative Commons / Wikipedia
As anticipated, my article yesterday affirming the nomination of Brett Kavanaugh to the Supreme Court was met with both praise and condemnation from evangelicals across the spectrum. We are living in a moment where anger runs high and social media allows for people to easily express the first thing that comes to mind. More than the quick comments, I deeply value my friends and colleagues who engage with what I write and offer a different and nuanced viewpoint. So today I am glad to welcome my colleage John C. Richards, Jr. to The Exchange. John serves as Managing Director at the Billy Graham Center at Wheaton College.

Having worked with Ed Stetzer for the past two years, one thing I have always appreciated about him is his willingness to deal with issues many Evangelicals avoid. His strong stance on immigration issues, the #MeToo movement, and mass incarceration is refreshing. He has used his platform in Evangelicalism to point out disparities in Evangelical approaches to those issues—issues I would say are key to gospel witness in this world.

As a Christian person of color, however, I approach Brett Kavanaugh, our President’s most recent nominee for the Supreme Court, with a bit less enthusiasm than my colleague. Besides the fact that the President missed the opportunity to change the narrative of a court dominated by white male appointments (only six of the 113 judges in the court’s 228-year history have been minorities or women), I long for the days when Supreme Court judges weren’t viewed as representing a particular ideology.

In grade school, I learned early about the system of checks and balances that help make our democracy a government for the people and by the people. As a lawyer, I know the vital role of the judiciary in interpreting the laws of the land.

In fact, landmark decisions like Brown vs. Board of Education, where the Court struck down segregation laws as “inherently unequal,” have had a profound and positive impact on American society.

But in recent decades our country has replaced checks and balances with political posturing—on both sides of the aisle.

Never before in history has our country been so divided politically. In the past, Senate confirmation hearings for Supreme Court justices were informative and valuable in determining a judge’s fitness to serve in this critical office. Today, confirmation hearings are nothing less than a political slugfest that often values partisanship over a jurist’s ability to fill a seat on the highest court in the land.

This relationship between judicial appointments and partisanship is why I am less excited about Kavanaugh’s nomination—especially when couched in terms of conservatism. While a more conservative court may be good for America, it hasn’t always been good for Blacks in America.

For many Black Christians, conservative strategies have historically had a disparate impact on our communities.

In Dred Scott vs. Sandford, a conservative court previously held that people of African descent could not be U.S. citizens. For the record, in the history of the Supreme Court, the Dred Scott case is regarded as the court’s worst decision.

Conservative strategies created the War on Drugs in the 1990s that has led to the U.S. far outpacing any other nation in the world in mass incarceration rates—which has resulted in a disproportionate amount of people of color in prisons across our country.

Ultimately, I want to encourage my White brothers and sisters in Christ to temper their celebration a bit. To be fair, many Black Christians would render a hearty amen to right to life and religious freedom issues that led many White Evangelicals to vote the way they voted in November 2016.

But let me be clear here. If there’s any concern about the Black exodus from Evangelicalism, we need to be sure that right to life is a womb-to-tomb issue—valuing human life and rights from conception to death.

We need to be sure that religious freedom and free speech extends to athletes who silently protest social issues in public spaces. We need to call out the hypocrisy of NFL owners who ask athletes to “just play football” and turn around and endorse federal judicial nominations on team Twitter accounts.

To make this nomination about Roe and dough (i.e. the religious freedom highlighted in the Christian baker case) ignores other essential issues Christians should care about—including immigration, health care, and labor laws.

One of the things Ed and I talk about as we lead our team at the Billy Graham Center at Wheaton College is always asking ourselves this question: Who is missing from the table? It has led us to build a diverse team of thought leaders that I’m proud to call colleagues.

And this diversity helps us to look at issues in Evangelicalism through a different mirror—a mirror that helps us identify features of our Christian witness we might otherwise overlook. That is my goal here.

As you process this nomination over the next several weeks (and years), I want you to ask the same question: Who is missing from the table? In a polarized culture, asking that question will lead you to more effective Christian witness. A witness that is neither conservative nor liberal, but distinctly reflects the robust, multifaceted nature of the gospel and its implications.