We have hard data about just how much altruism is practiced by Americans from all religious affiliations.
Ryan Burge 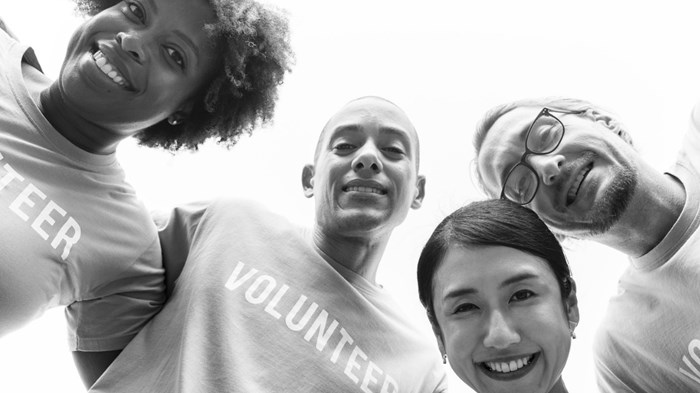 One of the hymns that always sticks me with was written by Catholic priest Peter Scholtes, entitled “They’ll Know We are Christians By Our Love.” This song was almost always accompanied by the pastor exhorting us to not just speak the love of Christ, but also show the love of Christ in how we serve those around us.

I’m no theologian, but I do know that Protestant Christians believe that salvation comes by the grace of God alone, but that if the love of Christ dwells within believers, then they must bear “good fruit.”

James succinctly states it: “Faith without works is dead.”

So, we should expect evangelical Christians to show their faith to those around them as a means of evangelism. Social science has a term for this concept as well, it’s called altruism. The term has a variety of meanings, but the one that is the most relevant to this discussion comes from psychologists who believe it is “acting out of concern for another’s well-being.”

It’s engaging in activity that will benefit others more than it benefits oneself. I think everyone agree that the world will be a lot better place if we all acted altruistically just a little bit more.

Fortunately, now we have some hard data about just how much altruism is practiced by Americans. The General Social Survey asked respondents about acting in selfless ways in a number of scenarios both in 2012 and 2014. Here are the eleven situations that were asked about on the GSS: gave blood, gave food or money to a homeless person, returned money after getting too much change, allowed a stranger to go ahead of you in line, volunteered for a nonprofit, gave money to a charity, offered a seat to a stranger, looked after plants/pets for others while they are away, carried a stranger’s belongings, gave directions to a stranger, and let someone borrow an item of value.

Some of these actions are obviously more costly than other ones, but they all speak to a sense of genuine kindness and care for other people, which is something we should expect to see from Christians. So, how often do various religious traditions engage in each of these acts? The figure below tells an interesting story. 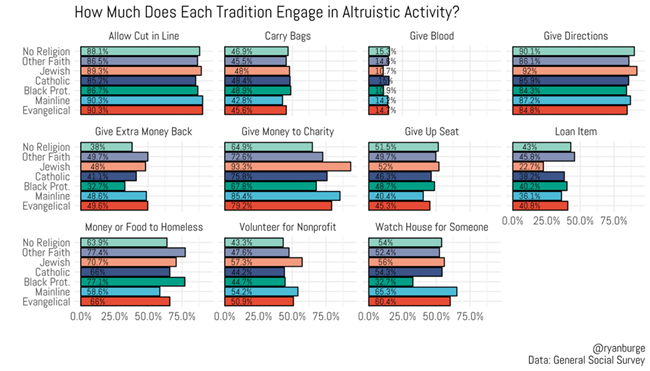 Note that there is not a lot of variation between the religious traditions. For instance, almost every group has allowed someone to cut in line in the last 12 months. The activity that was least likely to occur was donating blood, while the most likely was giving directions to strangers.

It may be helpful to look at places where evangelicals seem to do better than average. For instance, evangelicals are more likely to give money to charity than those who have no religious faith, but that seems like a somewhat unfair comparison because the offering plate is passed every week, while the nones have to take some initiative to make a donation.

This same is true for volunteering for a nonprofit. A significant departure also appears on the issue of giving extra money back to a cashier, where evangelicals are ten percent more likely to do so than religious nones.

To further test this, I compiled an altruism scale by adding up all 11 items and scaling them from 0 (meaning engaging in zero altruistic activities) and 100 (engaging in each of these activities multiple times a week). 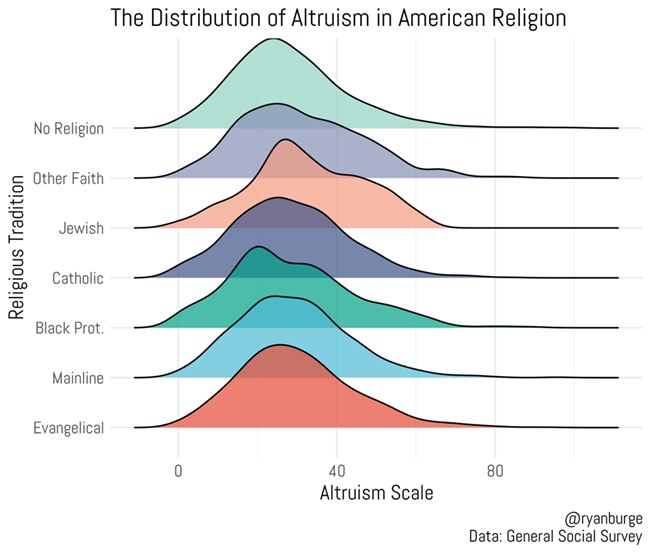 The graph above is called a ridgeline plot and is an excellent way to visualize a distribution of values. As is readily apparent from the graph, there is a great deal of uniformity to be found in the average altruism score for each of the seven religious traditions.

For instance, nones score the lowest at 28 out of 100, while the highest are Jews who score a 32.6. All seven groups fall within a range of just 4.6 points on a 100-point scale, and most of the differences between the seven groups are not outside the margin of error for the other groups.

The biggest takeaway from this graph is what is not here: there is no real difference in how many acts of altruisms occur among people of faith versus those who have no religious affiliation.

I was thinking that maybe what is happening here is that nominal Catholics are being lumped in with faithfully attending Catholics or that evangelicals who go once a year to church are being grouped together with those who attend multiple times a week.

So, I had to test that idea: the more devoted one is to religious faith, the more likely one is to engage in acts of kindness to other people. The graph below splits each tradition into low-income and high-income groups because some of the acts would obviously be less costly to people who make more money (donating money, etc.). 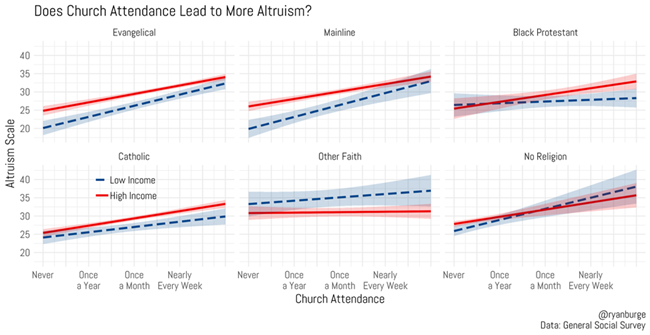 As one moves from left to right we should expect to the line rise up, which would indicate higher scores on the altruism scale. That’s what we generally find—the more people attend services, the more altruism they engage in.

For instance, an evangelical who attends multiple times a month engages in 10% more altruism than one that never attends church. That relationship is not confined to just evangelicals, though. The same pattern emerges for the other Christian groups analyzed here as well.

However, the bottom right panel, which is those of no religion provides a startling result. First, note that for those nones who never attend, they act altruistically just as frequently as other Christian groups.

I know it seems illogical that there are nones who attend church, but in the GSS, about one third of nones say that that attend church more than never, so it does happen. And when this group does attend church more, they see a rapid rise in their overall altruism score. While the sample size is small and therefore the margin of error is large, it’s apparent that church attendance drives altruism for basically everyone regardless of income or religious tradition.

I think that there are two ways to look at these results. One perspective is to be grateful that so many people from so many different religious and socio-economic backgrounds engage in selfless behaviors at essentially the same rate. It speaks to the idea that all people have the ability to be kind to one another and that, by and large, we are a good-hearted and generous society that treats people as we would want to be treated.

The other is a little bleaker: shouldn’t Christians engaged in acts of selflessness at rates that are higher than those who have no religious affiliation? I would argue that many of these measures are set up in such a way that should lead to evangelicals being naturally more altruistic than those with no religious community.

For instance, many opportunities to volunteer time, give money, and serve the homeless all come through being part of a church family. The same could be said for watching someone’s house while they are gone on vacation or even giving blood when the church sponsors a blood drive.

Yet, despite all these opportunities that are afforded to church going people, they engage in altruism at the same levels as everyone else. Christians are constantly reminded that they should be the hands and feet of Jesus Christ, but unfortunately that doesn’t come through in this data. If the writer of the hymn was correct,rch it doesn’t seem like many people will “know that we are Christians by our love.”

Dr. Ryan Burgeis a professor of political science at Eastern Illinois University. He teaches in a variety of areas, including American institutions, public administration, and international relations. His research focuses largely on the intersection between religiosity and political behavior, especially in the American context.