The center is disappearing in American politics and American religion. Moderates are becoming an endangered species.
Ryan Burge 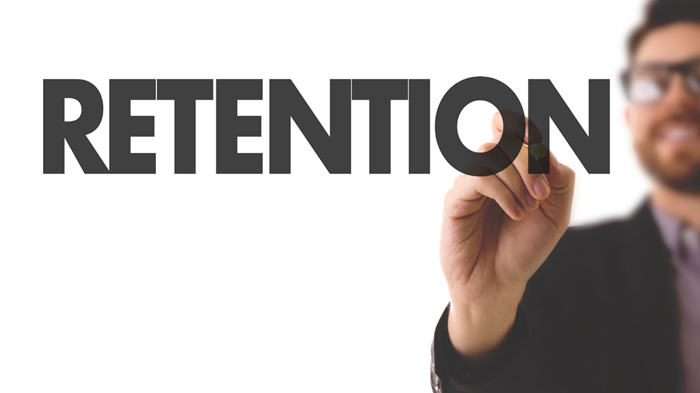 Sometimes I try to figure out why I am so interested in religion and politics.

The only answer that I can come up with is that religion played such a tremendous role in my formative years, that I am still trying to make sense of how that impacted the person I have become.

I was a kid who went to my Southern Baptist church three times a week, always volunteered to help paint or clean, was the first one signed up for summer camp, and spent most of my waking hours at the house of my youth pastor. I wore Christian t-shirt unironically and threw away my secular music and replaced with (usually inferior) Christian music. I was an all-in evangelical.

Then, I went away to college and had a “this is water” moment. I didn’t jettison all the religious tradition I grew up with, but found that the mainline church is much better fit for me.

Is that transition from evangelicalism to mainline Protestant Christianity a typical religious path? I didn’t have any sense of that, but knew that I had some data that could answer that in the General Social Survey.

First, I wanted to start with retention. I am defining retention as people who were raised in a religious tradition and still affiliate with that tradition as an adult. Which traditions are leaky boats? Which ones do a good job of keeping people in the fold? I calculated retention rates for each decade of the GSS, going back to the 1970s. 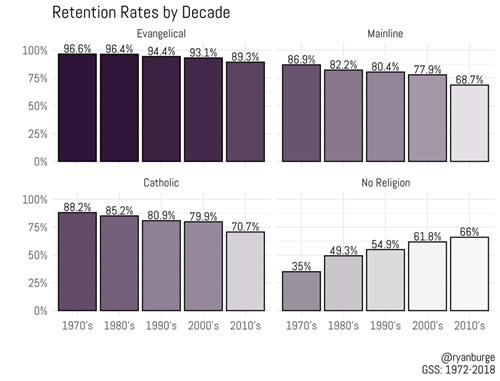 Notice first that evangelicals do a very good job of keeping people inside their tradition. In the 1970s, 19 out of 20 people raised evangelical said they will still evangelicals as adults.

However, that number has declined somewhat to 89.3 percent in the 2010s. That decline is a consistent pattern among other Christian groups.

For mainline Protestants, 86.9 percent stayed mainline in the 1970s but that has declined to just over two thirds in the most recent decade. Catholic retention looks very similar to that of mainline Protestants - starting at nearly 90 percent and now dropping to just 70 percent.

The “nones” are the clear outlier for a number of reasons. First, their overall retention rate is much lower than the other groups analyzed. In the 1970s, just one in three people raised without a religious affiliation stayed unaffiliated as adults.

The second interesting finding is that retention rates have actually gone up over time for the unaffiliated. Now, two thirds of people raised “nones” stay “nones.” That retention number is within shouting distance of both Catholics and mainline Protestants in the most recent decade.

Let’s move now to a more nuanced and complicated view of the American religious landscape. I calculate all the moves across the seven traditions for the sample collected between 2000 and 2018. I visualized those moves as an alluvial diagram below.

The thickness of the bands represent the number of people who moved from one tradition to another and the colors designate the tradition people grew up in. Hi-res here. 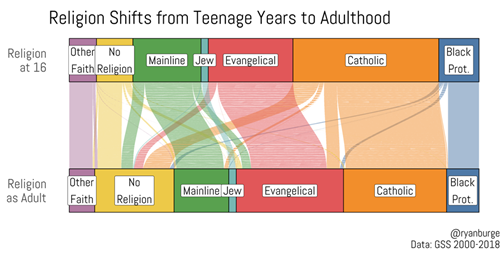 Obviously, there’s a fair amount of volatility here. Lots of bands emerge from the top row and land at various points on the bottom row. Some of those thicker bands represent huge swaths of the American public, while the skinnier bands indicate much less movement.

Note that those of “no religion” are clearly smaller in both rows, but that’s a function of stretching the sample back to 2000 when the “nones” were much less commonplace than they are today. Recall that in 2018, the “nones” are the same size as evangelicals and Catholics.

To put some actual numbers on the shifts I calculated the moves for the four larger traditions in the last five decades and visualized that below. A hi-res version of this graph is available here. 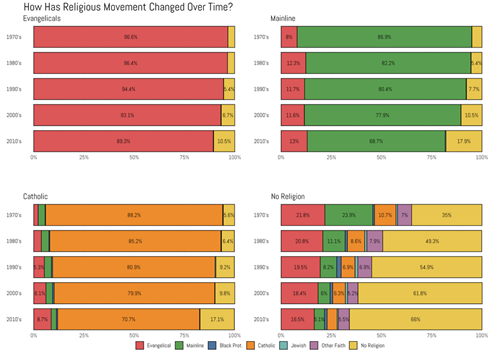 Evangelicals take one of two courses as they move into adulthood. First, the vast majority stay evangelical, as previously discussed. But, where do they go if they leave? The answer is clear: they become unaffiliated.

My journey (from evangelical to mainline) does not even show up in any wave of the GSS. Almost all people who leave evangelicalism move away from religion entirely.

What about mainline Protestants? They are a tradition that has declined from 30 percent of the population in 1976 to just 10 percent today, where did all these people go? Well, according to this analysis a large portion became evangelicals.

Even into the 2000s, more people who left mainline Protestantism became evangelicals than moving to any other tradition. However, in 2010 something flipped. While 13 percent of them left for an evangelical church, 18 percent left religion entirely, leaving just 68.7 percent who stayed mainline.

The Catholic church show a great deal of defection as well, but historically it’s more toward the unaffiliated category. Note that in the 2000s about one in ten people raised Catholic became a “none”, but in 2010 that share had nearly doubled to 17.1 percent.

Finally, if nones want to become part of a religious tradition, which ones do they select? The answer is somewhat surprising.

The most likely landing spot is evangelicalism, however that is declining somewhat in recent years. Still, in the 2010s nearly a quarter of all people raised without an affiliation become a Christian (evangelical, mainline, or Catholic) into adulthood.

It’s also worth pondering that many of them moved into the other faith category as well, a group that consists of Muslims, Hindus, Mormons, Buddhists, etc.

What to make of all this? First, evangelicals are doing a good job of keeping people inside the tent. I have written in other places that the Southern Baptist Convention is losing a lot of it’s young people, so how do we reconcile this?

Well, I would argue that lots of people are leaving evangelical denominations like the SBC and becoming non-denominational evangelicals. It’s a small move, not a major shift.

The other thing worth pondering is that almost no one is moving toward Catholicism or mainline Protestant Christianity. Instead, the movement is all at the edges of the spectrum - evangelicals on one end, and the nones on the other.

As I've argued before, the center is disappearing in American politics and American religion. Moderates are becoming an endangered species.

That will likely continue to polarize the country, making fruitful and respectful debate nearly impossible and squashing any potential for compromise in our society.

Join the conversation on Facebook
Tags:
None
Posted:
December 9, 2019