Celebration is the best medicine against the lethargy of discouragement.
Jeff Christopherson 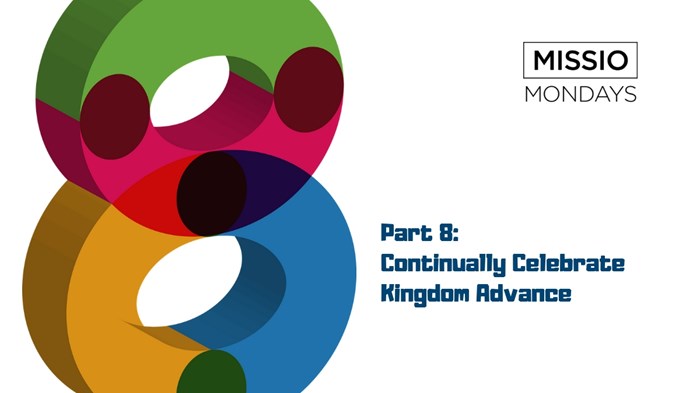 You become what you celebrate.” This proverb is continually repeated in leadership coaching circles because of the inherent truth in the notion. We, by nature, seem naturally drawn into the practices that are publicly celebrated by those whom we respect or admire. A child’s positive behaviors are bolstered by their observations of what their parents praise. We, as adults, are also prone to prioritize the actions that are celebrated by those in positions of leadership or influence in our lives.

Which leads us to our final simple (but not easy) rule for movement: Continually celebrate kingdom advance.

This final rule for movement—celebration—is often the least valued by those who yearn for movements and who are gifted with an apostolic impulse. The very missionary strengths of potential movement leaders often come with an inherent weakness that can contribute to the unraveling of the corporate will toward that prized end. Apostolic leaders of the past celebrated events as they transpired, in real time, and were already on to the next conquest. But an apostolic nature is a small minority within the body. Celebrating God’s faithfulness in the past has always been God’s plan to move his people toward the future.

Here are four reasons why celebration of the past is necessary for the movements of the future:

1 – You must anticipate the pain

The work of celebration begins in a counter-intuitive place. We must first anticipate the pain that will certainly come from the sacrifices implicit within the process of multiplication. Like so many other aspects of leadership, it’s all about expectations. If we assume that multiplication will be an unending, thrilling joy-ride, then we will find it hard to celebrate when the inevitable pain comes. We will find ourselves defeated and discouraged when our best leaders begin to murmur over the price of living as kingdom citizens; when it doesn’t seem that we are keeping up with the other churches of influence in our locale; when we have to do without the bells and whistles that mark cultural success; when faithful leaders openly voice genuine pain over the relational loss that they feel for those who have been sent out.

Sending prepared disciple-makers into the mission field has always meant that the hard and often unglamorous work of building new leaders lay ahead of me. There’s no need to be surprise by the seemingly discouraging implications of multiplication. Practitioners far and wide can testify to these realities. Many points of pain are inherent simply in the nature of sending itself. If you think that you will be the anomaly to the rule, deep seasons of discouragement inevitably await you. Perhaps it is wise to anticipate the pain so that you are not caught off guard when the predictable happens, and at the same time you can emotionally prepare the body for the costs. Which leads us to the second reason for celebration.

2 – You must constantly re-cast the kingdom vision

Simply because you as the leader are prepared for the pain, does not mean the church as a whole is. This is why it is vital to return over and over again to the kingdom vision that drives all that the church does. It will not be nearly enough to tip your cap to multiplication at an annual global missions conference. Rather you must infuse every sermon, every member’s meeting, every event with the kingdom vision of multiplying disciples of Jesus, particularly in places desperately in need of the gospel and healthy churches.

This big vision should flavor the church such that it echoes through hallway conversations, small group gatherings, and informal leadership meetings. It should be who the church is. It willingly accepts the pain of multiplication for the greater good of kingdom advance around the world. The threat of losing disciples to the “church growth church” down the street is minimized because their shallow vision becomes terribly uncompelling to a people who understand that their church is for the world – and not just for them. Over time, by God’s grace, such a kingdom vision can become the defining mark of a healthy church

3 – You must publicly recognize raised and sent leadership

There’s no greater time to cast such a kingdom vision than when a new team has been raised up, trained, and is about to be strategically sent to a location. These moments provide ready-made opportunities to paint an unforgettable picture, and at the same time, call for the next-up leaders. Do not waste such a prime opportunity. Provide meaningful context where these leaders can do more than simply become a passing sermon illustration. Allow them to share their story first-hand—describing the way God called and equipped them for the mission ahead. Don’t attempt to airbrush their story. Speak to the rough patches and difficult moments along the way. Attempt, as best you can, to normalize the story of those called and sent, and make it possible for the hearers to imagine themselves stepping into their shoes. Even after the team has been sent, take every opportunity to highlight their mission and make your “sent ones” the greatest heroes of your church’s story.

4 – You must host gatherings to celebrate spiritual offspring

Finally, be strategic about planning annual events that allow the family to reconnect and celebrate what God has done through those who have been sent. This can happen through an end-of-the-year celebration where multiple churches and leaders tethered through the same relationships come together to report on God’s goodness. When distance makes this impossible, the sending church could offer to bring back a lead planter and family to share about God’s work in a new place. Beyond that, through technology, you can visit with your sent-ones on a regular basis in the church’s gatherings. The mechanisms will vary, but the common thread is that joint celebration allows people (especially the sending church) to see the fruit of multiplication through the real kingdom stories of lives changed by God’s power.

When the pain of multiplication is anticipated, the celebration of God’s kingdom advance becomes the best medicine against the lethargy of discouragement.