“We lose the scandal of the gospel when we hunker down with our political tribes.”
Ed Stetzer 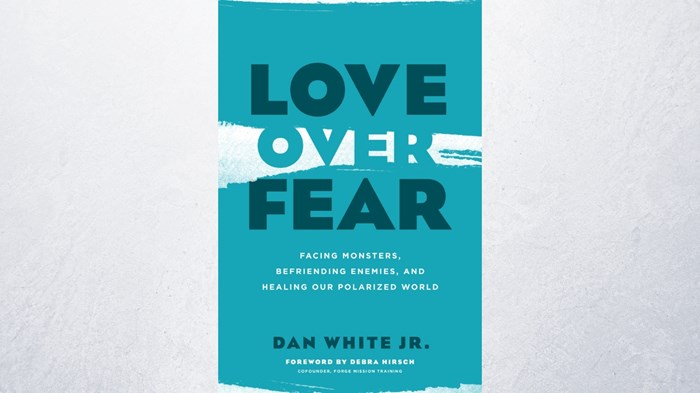 Image: Moody Publishers/Canva
I am glad to welcome Dan White Jr. to The Exchange today. Dan co-planted Axiom, in Syracuse, New York. He is also a strategist with the V3 Movement, coaching cohorts from around the country through a nine-month missional system. Below I talk to Dan about his latest book, Love Over Fear: Facing Monsters, Befriending Enemies and Healing Our Polarized World.

Ed: What is it about Western culture that prompted you to write about choosing love over fear?

Dan: The very first spark of the book started local. A few years back during the Romney/Obama Election—which seems like child’s play compared to the Trump/Clinton Election—I had an event occur that stirred up a storm.

An individual who attended my church decided to leave. The circumstances around her departure left me scratching my head. She gently shared, “Dan, I don’t feel safe in this church knowing there are liberals here who believe so differently than me. I just can’t relax and be myself.” I tried desperately to convey that there was space for her, but it wasn’t enough.

Fast forward just a couple of weeks later and a couple came to me with the same intense concern, yet this time from the opposite angle. “Dan, we’re not sure we will ever feel settled here with people who hold such oppressive positions. We need a church that takes sides.” I tried to persuade them that our church was a space for both conservatives and progressives to dwell in community. They made it clear they’d be moving on.

I grieved that both of these folks could not stay in the mix together. They were repelled by each other. Rather than moving toward one another, despite their differences, they chose more distance. I sense this moment was a snapshot of the state of our country, and the church, more importantly.

Ever since, I’ve been on a journey, asking these questions: “Can we coexist together?” “Is it possible to share in local table fellowship?” If we take our cues from cable news, we might give an emphatic “no” to that question. It sure seems impossible.

This type of ‘tribalism’ seems so natural, but is it true to the movement that Jesus started? My deepest concern is that ordinary Christians are being discipled by the fierce polarization in our culture. We are not resisting it; we seem to be imitating it.

Ed: What is the hope for our polarized and fearful world?

Dan: My hope is that Jesus-followers can choose the alternative path offered to us —“You have heard that it was said, ‘Love your neighbor and hate your enemy.’ But I tell you, love your enemies and pray for those who hurt you, that you may be children of your Father in heaven…” (Matt. 5:1, 43–44). This is the gospel of enemy-love. It has the power to heal hardened polarization.

We hate and fear our enemies; it is only natural. Jesus acknowledges this in Matthew 5. Our literal brains—specifically our Amygdala—fire at us two options in the face of that which threatens or offends us: to attack or to avoid. Interesting that our brains react this way because this is also the terms set for us—by the Powers and Principalities—in the current Culture War. We attack those we disagree with by using verbal grenades or we avoid them all-together, feeling righteous.

The more peculiar way is a deliberate move beyond what is natural into something unnatural, supernatural even. It is a move of affection towards our enemies. This is the good news: God in Christ moved towards us with affection while we were still enemies and we are sent to go and do likewise.

We are under-formed in the practices of enemy-love and over-stimulated by protecting our opinions. The witness of Christianity would change overnight if it put down the mantle of defending God’s reputation and instead picked up the responsibility of loving enemies. I want to see the power of this kind of love be given a chance in our personal and collective life as Jesus-followers.

Ed: What are some practical steps someone can take to move toward an enemy in love?

Dan: I think first we must accept the reality of our times. If you are a Conservative and you move toward Progressives with affection, you will be labeled as one who compromises on moral issues. If you are a Progressive and you move towards Conservatives with warm hospitality rather than warring hostility you will be labeled complicit with injustice.

The primary reason we don’t take practical steps, even the first step, is because we don’t want to lose our tribal loyalties. Our identity is so rooted in political affiliations that we fear being viewed as compromising or complicit. The Us vs. Them way of self-identifying is so intense and even sub-conscious that it controls us more than our primary identity in the words, works, and ways of Jesus.

Jesus was labeled all kinds of things, many of which were not true, and this was because of his table fellowship. Jesus sat at a table, not as the handsome, well-groomed centerpiece of a painting, but as an accessible, warmhearted, spiritual troublemaker, willing to share a potluck with a household of strangers.

Jesus didn’t merely eat with objectionable people—outcasts and sinners—he ate with anyone, indiscriminately! He dined with a whole spectrum of image-bearers from Pharisees to prostitutes.

The movement out of fear into the work of love collides at the table. I like to call this “making meals for frenemies.” Who do you need to eat with who is unlike you and irritates you? How can you lean towards them with compassionate curiosity?

Ed: Why should Christians choose to engage with love rather than simply choosing to disengage for the sake of peace?

Dan: Disengagement is not peace—anyone who has been married know this. Disengagement only fuels the angst, anger, and antagonism between us. It creates a massive void where increasing amounts of fear stew.

Engagement is necessary because it is at the center of God’s activity in the world. Jesus started a polarization-busting movement. In the selection of his disciples, Jesus gathered three militant nationalists, a tax collector who favored the Sadducee party, six fishermen who lived hand-to-mouth and were exploited by Roman taxation, one member of the Zealot party, and a wealthy nobleman who was linked to the Pharisees. This is scandalous!

It would feel like organizing a small group with a few Black Lives Matter protesters, some blue-collar workers who dig Donald Trump, a couple who live on public assistance, a wealthy Republican gentleman who loves Capitalism, and a member of Antifa.

It’s an understatement to say these folks would have loathed being in the same room with each other. If it were not for Jesus holding this space, they’d all naturally slide into the cultural ditch of mutual hatred for one another. He called them into the same inner circle, a space that would demand something from everyone.

One-on-One with Dan White on Loving Those Who ...