One-on-One with Jonathan Merritt on ‘Learning to Speak God from Scratch’ : Part 1

“Most Christians who speak God do so passively.”
Ed Stetzer 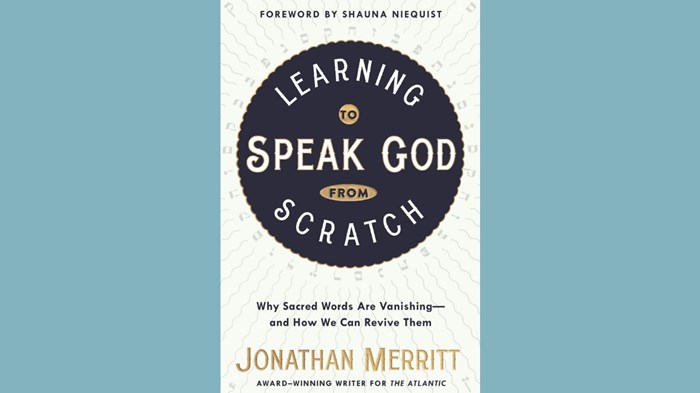 Image: Convergent Book/Canva
Everyone in “religion” has heard of (and has an opinion of) Jonathan Merritt. Jonathan is one of America's most prolific religion and culture writers. I’ve known Jonathan for a long time and I consider him a friend. We often spar online (and occasionally on the phone), so when he put a new book out, I wanted to interview him about it—and ask him some questions about his own views on issues outside the book. He agreed to do both. In this two-part series, we talk about his new book Learning to Speak God from Scratch, plus a few other topics.

Ed: Jonathan, you are (to quote Churchill) a “riddle, wrapped in a mystery, inside an enigma.” When we first met, you were a teaching pastor at an evangelical megachurch, but I’ve seen you call yourself a “liberal Protestant” online. So, are you an evangelical, a mainline Protestant, or what?

Jonathan: Speaking of Christian words, you've used a lot of them here. As a result, answering your question requires a little bit of conversation and context, which I'm happy to provide.

I don't remember labeling myself a "liberal Protestant," but in many ways, that would be accurate. I've always been a part of the Protestant tradition, although I have a deep respect and fascination for the Roman Catholic Church and my spiritual director is a Jesuit priest.

Additionally, I'm somewhat liberal in many regards. I do not think that being a Christian means I have to dismiss the claims of science about issues like climate change or the origin of life, for example.

I wouldn't describe myself as "mainline Protestant" because that implies alignment with a church in a mainline denomination. I actively attend Trinity Grace Church in Tribeca in New York City, which is a Protestant church but not a mainline church.

People have also called me an "evangelical," and I've even called myself that on occasion. Defining what that means exactly is increasingly difficult. The meaning of a word has two parts: definition and connotation. The connotation of the word is synonymous with theological fundamentalism and uncritical Republicanism. I'm not evangelical if that's the case.

But by the best definition of "evangelical," which I argued at The Atlanticis Bebbington's quadrilateral, I think I qualify. The four points are conversionism, crucicentrism, activism, and biblicism. Those describe me as I understand them—but not everyone understands them as I do.

Some people, for example, claim that biblicism necessitates a belief in the inerrancy of Scripture, which is a belief I don't hold. So I would describe myself this way, but others can judge for themselves.

Labeling types of American Christians, as you well know, is becoming trickier and trickier these days. I resist labeling myself too often in public settings because once people categorize you, they will hear everything you say through that filter—or they'll stop listening to you altogether.

But if I had to give the most precise label for myself, I would probably pick "Christian mystic." My trajectory in terms of my beliefs and practices hasn't been from right to left but rather from closed to open.

I am more open to practice-based expressions of Christianity, which include a heavy emphasis on liturgy and sacraments and the historic creeds. I am more open to contemplative forms of Christianity, which means my personal spiritual formation isn't comprised of just sermonizing and singing; it now includes a lot of silence, solitude, and stillness.

While I try to read broadly, more mystical writers are resonating most deeply with me these days—people like Henri Nouwen and Julian of Norwich, Richard Rohr and St. John of the Cross, Christian Wiman and Catherine of Sienna, Barbara Brown Taylor and Thomas Merton. I'm far more interested in exploring "the cloud of unknowing" than "answers that demand a verdict" these days.

Ed: I have interviewed you once before and it made national news. You indicated then that you held evangelical or traditional views concerning homosexuality. It has been a few years. So, to quote a question you asked Eugene Peterson, "If you were pastoring today and a gay couple in your church who were Christians of good faith asked you to perform their same-sex wedding ceremony, is that something you would do?" Where are you at now?

Jonathan: Lucky for me, and perhaps to the relief of many of your readers, I have no plans to reenter the pastorate right now. I'm quite happy being a writer and a journalist and a parishioner for the time being. That means I don't spend much time thinking about how I might run a church if I were a pastor.

What I can say is that I am grateful that neither you nor I get to determine who is welcome at the Lord's table. All are welcome, and they are welcome as they are and not as someone else says they should be.

Dietrich Bonhoeffer once reflected, "When I first studied theology, my idea of it was quite different, rather more academic probably. Now it has turned into something else altogether." What had it turned into, you may ask? It transformed into what Charles Marsh calls "a lived theology." Which is to say, a theology that doesn't just bury its head in books—whether the Bible or tomes written by one's favorite thinker—but rather thinks in real life and in real time alongside real people.

I'm astounded that so many of my evangelical friends have failed to mature in this way, theologically speaking. Most of them hold basically all the same views they held when they graduated from fill-in-the-blank evangelical seminary.

It must be nice to fully figure out God and faith and divine mysteries by the time one turns 24, but that has not been the case for me.

In the past six years, I've spent a lot of time thinking about my views on LGBTQ theology and relationships. I've read most of the literature, both academic and popular written by progressives and traditionalists, that has been written on this issue. I've dialogued with lots of LGBTQ people about this, both those who are celibate and those who are not. And I've done a boatload of prayer and have reflected the scriptures repeatedly.

Looking back over the interview I conducted with you, there are some things I would have said differently if I were doing it now. As I say in Learning to Speak God from Scratch, I wish I had not referred to my sexual orientation as "broken." It's not an appropriate use of that word, and I think using it in that way is harmful.

I also implied that the Bible's teachings on the matter are as plain as the nose on one's face. I don't believe that is true today. There is a lot of important scholarship being done by thinkers on both sides of the issue who love God and take the Bible seriously.

I don't have enough space here to fully flesh out the totality of my thinking on such an important matter, and to try to do so would not be fair to those that these views impact. I can tell you that I actually plan to make time to write about my personal views on this matter in the not-too-distant future.

So those who are curious can look forward to that, I suppose. And after I write about my personal views on this topic, I'd be happy to come back to this forum and discuss my thinking with you.

Ed: Before we get to your book, you are such a gifted writer I find it quite irritating how quickly you write! How did you get there?

Jonathan: I appreciate the compliment, and I'm sorry to have caused you any discomfort. I felt called to be writer in the fall of 2004 and ever since then I've become a student of the craft of writing.

I read about writing constantly and I try to consume a steady diet of books that have withstood the test of time. One of my favorite quotes about writing is from Ernest Hemingway: "We are all apprentices in a craft in which none is the master." That's how I understand the craft of writing, and I hope it has served me well.

In addition, I think most writers don't allow their work time to incubate or marinate. Learning to Speak God from Scratch, for example, took me more than four years from start to finish. That's eons in today's marketplace. But I think the aging process helped to produce stronger, more haunting prose.

Ed: The thesis of the first part of your book really resonates with me as a missiologist: “Words don’t come with meaning, but are given meaning by people in culture.” That’s something we teach missionaries every day. How can Christians think differently about the words that we use in engaging people who are not of the same mentality?

Jonathan: Think differently? I don't think most Christians think about them at all. Most Christians who speak God do so passively. They have been given a vocabulary full of symbols and meaning that have been developed over time. We may use these words, but we do not ponder them.

As I've traveled the country talking about these things, I've asked a lot of people to stop and define a sacred word they've just spoken to me. "What does grace mean to you," I might ask. Most of the time, people respond with a blank stare. They haven't really thought about it before.

Most people never stop to ask, "What am I saying when I'm saying what I'm saying?" If people want to speak God, perhaps they could start by asking that question.

When it comes to people who "are not of the same mentality," by which I think you mean non-Christians, I would say that we should remember that conversations are an act of dialogue rather than monologue.

Many Christians engage in monologue with non-Christians when talking about faith. They enter the conversations with a simple assumption (I am right and they are wrong) and a simple mission (I need to argue well enough to convince them they are wrong and that they should believe or behave like me).

“This” is a terrible way to have any sort of conversation, and it fails the Golden Rule. Instead, I encourage Christians to seek to understand firstly and seek to be understood secondly. If you want to engage people who are not of the same mentality, try making sure that more than half of what you say ends in a question mark rather than a period.

I will continue my conversation with Jonathan in Part 2.

One-on-One with Jonathan Merritt on ‘Learning to Speak God from Scratch’ : Part 1

One-on-One with Jonathan Merritt on ‘Learning to ...