“The biggest barrier to reaching cultural Christians is that there is no clear starting point for a conversation.”
Ed Stetzer 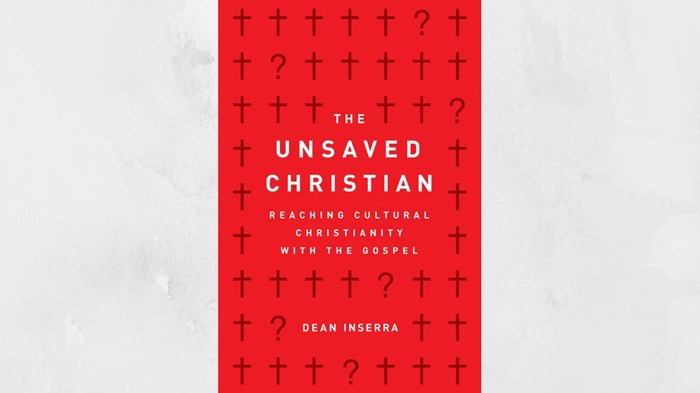 Image: Moody Publishers/Canva
I am glad to welcome Dean Inserra to The Exchange. Dean is the founding pastor of City Church. Today I talk with him about his book The Unsaved Christian.

Ed: How do you define cultural Christianity?

Dean: Cultural Christianity is difficult to define because there is no established category that exists for this religious group. I believe it begins by understanding that this is an actual religion. Cultural Christians claim to be Christians, but by that claim they mean they are not atheists, agnostics, Jewish, or Muslim. They would quickly answer “Christian” if asked to indicate their religion, but the reasoning for the claim of Christianity has nothing to do with Jesus Christ or his gospel.

Cultural Christians are theists, consider themselves to be good people, and believe they go to heaven when they die. Exactly who is this god, what makes one good, and how one qualifies for heaven are questions the cultural Christian is not prepared to answer, or see as relevant.

These are people who are Christians by heritage, morals, and affiliation, but not by actual conversion, or convictions about the person and work of Jesus Christ. It is a mistake to think of cultural Christians as only consisting of those in the Bible Belt, because a generic theistic belief exists all over our country, and shows up on polls and surveys as Christian.

Ed: What was your own experience of having grown up culturally Christian?

Dean: I went to our neighborhood mainline Protestant church every Sunday as a kid, unless I was sick or on family vacation. I was familiar with Bible stories such as David and Goliath and Noah’s Ark, had the Lord’s Prayer memorized, and knew that Jesus was born in a manger in Bethlehem.

I attended a Fellowship of Christian Athletes retreat when I was 13 years old and heard the gospel for the very first time. Yes, I grew up going to church every Sunday and had never heard the gospel. I absolutely considered myself a Christian and would have been offended if you suggested otherwise.

This was a Christianity that was without Christ. The cross and resurrection could have not existed and it wouldn’t have changed my Christianity. Growing up, I never had anyone tell me I was a sinner in need of a savior. I was told to have hope and faith, to love others, and ultimately the greatest doctrine of cultural Christianity—to be a good person.

The problem was that those were vague words and charges, without definition. I joke that I’m the only person who has ever come to faith in Christ and been angry about it. While I certainly had joy, I was amazed at what I had been missing, and truly thought How have I never heard this before?

On the day I believed the gospel, repented of my sins, and gave my life to Christ, I realized my story was also the story of my friends and family. As a result of my experience and the love I had for my friends and family, the mission field of cultural Christianity became my passion.

Ed: What are some of the barriers to reaching cultural Christians?

In conversations with cultural Christians, you are talking to people who have never considered for a moment that they are not Christians.

It is as if they need to get lost before they can be saved. Another barrier is their past participation in religious rites of passage that can serve as false assurance. This can be anything from taking a first communion and going through confirmation, to praying a prayer as a child. I often call cultural Christians “Pharisees without the legalism.”

By that I mean that they are people who trust in themselves for their own righteousness (Luke 18:9). The belief that one is a great person makes for someone that is quite difficult to reach.

Ed: How do you engage in cultural Christian outreach with courage and love?

Dean: The love of Christ and our neighbors must always compel our mission. If our engagement with a cultural Christian is not one that is motivated by compassion, we shouldn’t be surprised when they are uninterested in our convictions. Lovingly engaging cultural Christianity begins with not being in denial.

This is not a discipleship issue where one simply needs to be more serious about following Jesus. Cultural Christians actually need to encounter Christ before they are discipled. This is an evangelism issue. It is not that they are not quite Christian enough, but they are actually part of a different religion altogether. After one gets out of denial about the spiritual state of their friends, it is going to take courage to engage in conversation.

It is pretty offensive to have someone think you aren’t a Christian when you have considered yourself to be a believer for the entirety of your life. This is very different from a conversation between a Christian and an atheist where the ladder may out rightly think a Christian is somewhere between wrong and crazy due to their convictions.

One of the greatest things you can do for a cultural Christian is to expose them to preaching that is biblical and gospel-centered. There is a very good chance they have never heard it before, and when they finally do, the lightbulb of Okay, this is way different than what I’ve experienced or heard goes off in their minds. One of the best things you can do for cultural Christians is to help them see what the gospel is and what the gospel is not.

Also, ask honest questions about Jesus that helps them see their inconsistencies. For instance, they admire Jesus, but they don’t worship him. The resurrection has no basis for their faith, but they have already chosen and outfit for the Easter service. Cultural Christianity is a bizarre religion, after all. Help them see that in love.