One-on-One with Steve Green, President of Hobby Lobby on 'This Beautiful Book'

Today I talk with Steve Green about "This Beautiful Book", which was just released.
Ed Stetzer 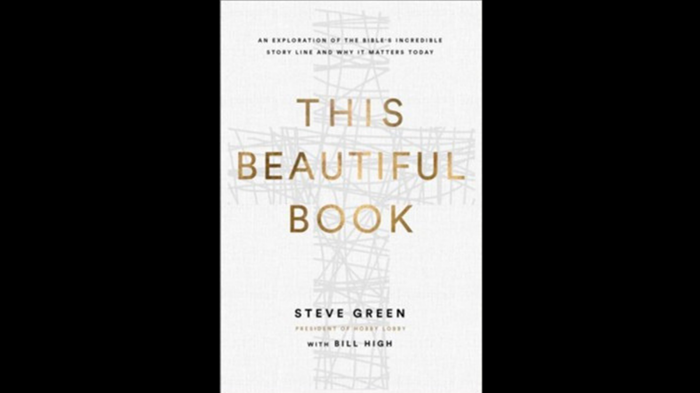 Today I am thrilled to welcome Steve Green, President of Hobby Lobby, to The Exchange. Below we talk about his new book, This Beautiful Book: An Exploration of the Bible's Incredible Story Line and Why It Matters Today. Steve will be joining me THIS Thursday, November 14 for a free webinar to talk about A Worldview of Christian Leadership That Changes Organizations. You are invited to join us.

Ed: You and your family founded the Museum of the Bible in D.C. You clearly believe the Bible is important and have worked extremely hard to educate as many people as possible about the Bible. Where does your love for the Bible come from?

Steve: My wife and I both grew up in Christian families who actively served in their churches. As children and teenagers, we went to Christian camps and youth conferences. (Actually, the first time we met was at a church camp, although we didn’t start dating until later.) Our parents raised us to look to the Bible for life guidance and hope.

Like so many young families, we had to wrestle with raising children, making ends meet financially, dealing with debt and budgeting. In our case, we looked to the Bible for answers.

Ed: The subtitle for your new book is “An Exploration of the Bible’s Incredible Story Line and Why It Matters Today.” Why does the Bible matter today?

Throughout the years, the Bible has continued to have an impact on individual lives and in the world. In the year 2000, Lifemagazine came out with a publication titled Life Millennium: The 100 Most Important Events and People of the Past 1,000 Years.It was of course a subjective listing, but they endeavored to come up with a list. The top ten included items such as “Gunpowder weapons,” “Galileo’s telescope,” and “The Industrial Revolution.” But guess what the number one item on the list was: "Gutenberg prints the Bible.”[2]

Notice that it wasn’t the Gutenberg press; it was “Gutenberg prints the Bible.” I don’t believe any of us fully understand the degree to which the printing of the Bible has influenced our world. Scientists, writers, builders, composers, presidents, kings and queens, peasants, and the lame have all been influenced by this book.

Ed: What is your challenge to anyone who is skeptical or confused about the Bible?

Steve: Every person ultimately must decide for themselves what they believe about the Bible. I would challenge those who are skeptical or confused to investigate the Bible with an open mind. Just consider the possibility that there could be an all-powerful God who can do the supernatural. Stay open. Explore the evidence for yourself.

Millions of people credit the Bible for changing their lives. They were hopeless but then found hope when they heard the Bible’s story. People on every continent, from different cultures, speaking different languages, from the wealthy to those with little means, from the most educated to the least—all have been impacted by this book.

C. S. Lewis, for example, was an atheist. But he explored the Bible for himself, through reading it and through conversations with his friends. Lewis writes, “Christianity, if false, is of no importance, and if true, of infinite importance. The only thing it cannot be is moderately important.”

Ed: Throughout the book you retell Bible stories – some familiar and some more obscure. Do you have a favorite Bible story that you retell in this book?

Steve: I love all the Bible’s stories, but one of my favorites I retell is the story of Mephibosheth, because it’s such a great picture of the overarching theme of the Bible.

Mephibosheth is the grandson of David’s enemy, King Saul. After Saul dies in battle, his servants know the kingdom will soon be handed over to David. His nurse flees the palace with little five-year-old Mephibosheth, who falls and becomes crippled (2 Sam. 4:4).

From then on, Mephibosheth lives in hiding, crippled. King David, however, was best friends with Mephibosheth’s father, Jonathan. Years later, he inquires whether any relatives of Jonathan are still alive and summons Mephibosheth to the palace.

Mephibosheth arrives, expecting to be killed. Instead, King David returns to Mephibosheth all the land that belonged to his grandfather Saul and invites Mephibosheth to eat at the king’s table for the rest of his life (2 Sam. 9:7).

After I read this story and considered its message, it struck me. Mephibosheth’s story is the same story the Bible tells—the story of the God King who seeks out the hopeless, those who are far away, and even his enemies and invites them into relationship with him at a personal cost to himself.

Join the conversation on Facebook
Tags:
None
Posted:
November 12, 2019

One-on-One with Steve Green, President of Hobby Lobby on 'This Beautiful Book'