“In many parts of the world, the teaching and preaching of Methodists set the stage for the astronomical growth of Pentecostalism.”
Ed Stetzer 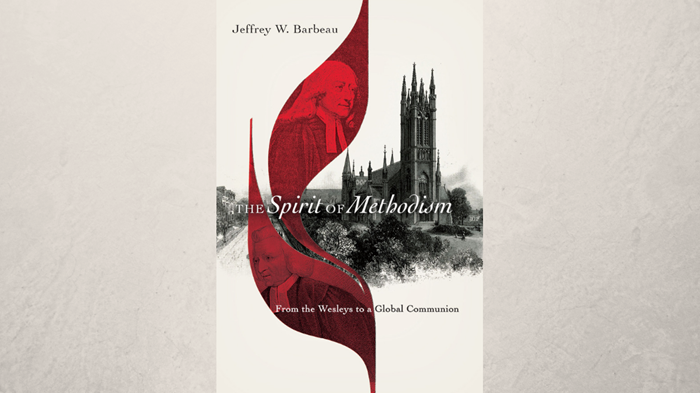 Image: Intervarsity Press/Canva
Today I am glad to welcome Dr. Jeffrey Barbeau to The Exchange to talk about his latest book, . He serves as Professor of Theology at Wheaton College in Wheaton, Illinois.

Ed: There appears to be a crisis in United Methodism today. Tell us more about the current problem.

Jeffrey: It all depends on who you ask! The short answer is there’s a battle over sexuality in the church. Traditionalists argue that the cultural shift in favor of same-sex marriage is a break in historic Christian doctrine. Progressives believe that refusing ordination to gay and lesbian clergy is an act of profound injustice.

A closer look at the issue might reveal other layers that contribute to the problem.

First, American Methodists have long valued collaboration in favor of shared ministry. Early American Methodists differed sharply over the question of slavery, but somehow managed to carry on despite some serious social and political differences. Finally, when charges of slaveholding were leveled against a bishop, the issue could no longer be ignored.

Second, and this is related, the church is coming to grips with the challenge of unity in a vast, global communion. For a long time, American Methodists enjoyed numerical dominance that allowed them to set the agenda on matters of faith and practice. But with the remarkable growth of Methodism in Africa, Asia, and other parts of the world, voices from the global church can no longer be hushed.

And here is where I think that, finally, the UMC has a crisis of ignorance. When people in a denomination or church fail to understand their own history, they are liable to confusion and misunderstanding.

United Methodists aren’t the first to face these issues, but their prominence in American public life makes the crisis more visible.

Ed: What experiences inside and outside of Methodism shaped your thinking about the movement?

Jeffrey: An important part of my own story involves active participation in Methodist churches in different parts of the country. My grandparents brought me to a United Methodist church in New York each week as a child. I sometimes joke that most of what I know about Christianity I learned from a group of women teaching those Sunday school classes.

But I’ve had the opportunity to live in other, very different communities, too. I belonged to a UMC church plant in Oklahoma for several years. The founding pastor made participation in small groups (just like the early Methodists) a priority for every member of the church. I helped organize those groups and saw a dynamic process of evangelism and discipleship in action.

When I moved to Illinois, I traveled around to most of the United Methodist Churches in the area near my home and saw remarkable diversity once again. Within blocks of one another, churches could differ starkly, reflecting longstanding institutional traditions, vibrant influences from the holiness movement, or a progressive accent on social justice. These differences reflect even wider variations I’ve observed in my travels both here in the US and overseas.

Ed: You coin the term “Broad Church Methodism” in the book. What do you mean?

Jeffrey: The origins of the idea come from the Anglican heritage of John and Charles Wesley. In the century that followed their deaths, many Methodists continued participating as evangelicals within the Church of England.

Anglicanism remained largely unified, despite the emergence of different “parties” or divisions that could be observed in local churches—some churches were more evangelical, others worshipped in a high church form, and so forth. The Anglican Broad Church movement emphasized toleration between these different groups.

I’ve taken up that same terminology as a way of capturing the breadth and diversity within Methodism worldwide—both within United Methodism specifically and throughout the vast global network of Wesleyan church traditions.

Some United Methodists prefer to speak of an “extreme center.” The problem with that terminology is that no one seems to agree on what or where the “center” really is.

Instead, I think we need to come to a greater understanding of the diversity of Methodism and how those different histories brought us to where we are today—certainly that sort of understanding is essential if churches hope to remain in some form of cooperative worldwide ministry.

Ed: The book’s title is intriguing. Why “The Spirit of Methodism”?

Jeffrey: In my study of Wesleyan theologies and Methodist churches around the world, I couldn’t escape the one theme that recurs again and again: the presence of the Holy Spirit. Plenty of people have heard about John Wesley’s “heart strangely warmed” experience at Aldersgate Street, but fewer realize that the early emphasis on the Spirit is shared across generations of Wesleyans from all different theological persuasions.

In fact, talk about the Holy Spirit is a key component to its growth around the world.

Take the Chinese evangelist John Sung. He’s one of the most successful Christian evangelists in the twentieth century and yet few Methodists have ever even heard his name. Sung thought repentance and transformation by the power of the Holy Spirit was at the very heart of the gospel—and that message led to the conversion of thousands in China.

Some believe at the time of John Sung’s death in 1944, one in ten Christians in China had come to faith under his preaching ministry. That’s an extraordinary figure!

Of course, in many parts of the world, the teaching and preaching of Methodists set the stage for the astronomical growth of Pentecostalism. You really can’t talk about Methodism without talking about the Spirit.

Ed: Wesleyanism was, for decades, the most attractive—in the sense that Finke and Starke talk about in The Churching of America. It was a winner in the religious economy. Now, it seems to have lost some of its attraction. Where are the Wesleyan heroes, for example? Is that true and why?

Jeffrey: Early Methodism demanded a lot of its earliest members. Small group participation, attendance at the Lord’s Supper, giving to the poor and needy, and regular participation in the life of the community required sacrifice and commitment. Not surprisingly, Methodists became increasingly influential in public life.

Of course, the funny thing about history is that only time will tell who the “winners” really are. Some of the most important figures in early American Methodism are the unnamed laity who began small groups in hard-to-reach places. When itinerant preachers and missionary evangelists arrived in a frontier location, they were often surprised to discover a Methodist class meeting already thriving.

Today, we might be tempted to believe that Methodists have disappeared from public life, when in fact they remain as active and influential as ever. A great example of this is the surprising fact that both former President George W. Bush and former Secretary of State and Senator Hillary Rodham Clinton are both United Methodists. That’s not only a sign of its success but also another mark of its extraordinary breadth.

While it’s easy to look back wistfully, there are still many influential Methodist ministers today. Apart from some pretty significant leaders around the world, look at some of the well-known preachers even here in the United States. Take Adam Hamilton in Kansas City or Jessica LaGrone at Asbury—each attract large numbers through their preaching and popular books. And scores of seminarians and pastors have been shaped by the theological work of Methodists such as William Abraham, Bishop William Willimon, or Beth Felker Jones.

Ed: What does this book offer for non-Methodists?

Jeffrey: The Spirit of Methodism is an upbeat history of faith and practice that moves from the origins of the movement in Britain, to the development of Methodism in North America, to the astounding growth of Christian communities around the world.

Readers who want to understand where Methodism came from and what people in the Wesleyan traditions believe will find this book especially helpful. I’ve written the book to be accessible for a broad audience, with plenty of pictures and explanatory sidebars to keep even the most tentative readers interested. If you like stories of faith, courage, and controversy, this is the book for you.