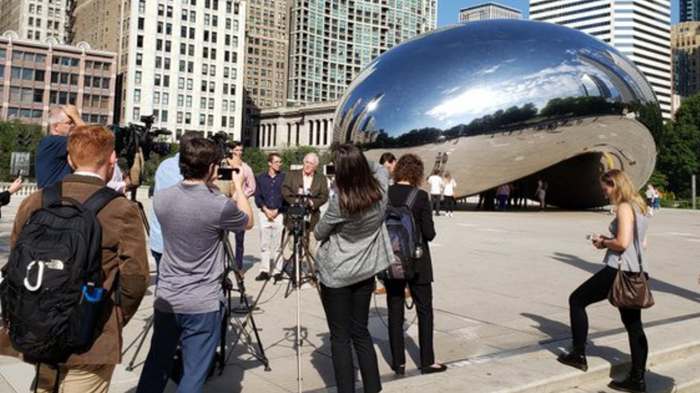 Right now, Wednesay morning, a group of Wheaton College students is in downtown Chicago, announcing a lawsuit related to a revision in the Millennium Park Rules. These new rules limit access to public parks for evangelistic activity (among other forms of speech). Deciding to sue can be difficult, but in our system, when the government creates rules that restrict speech, this is often the remedy.

These students participate in Wheaton Evangelism Teams, a student-led program that intentionally shares the gospel in Chicago on Friday nights. As this interview with the law firm (Mauck & Baker Law) explains, they were stopped from sharing the gospel in the famous Millennium Park.

I love their passion for sharing the gospel— so I wanted you to know more.

Ed: What happened in the first place?

Mauck & Baker: The circumstance began on December 7, 2018, when two of the four Wheaton College students engaged in street evangelism on the sidewalk between Millennium Park and Michigan Ave. Park staff told them they were not allowed to hand out their literature or preach and the students stopped.

Later that day, one of the other students showed up at the park and began open air preaching at The Bean. Once again, park staff told the Wheaton student that he was not allowed to preach.

Over the next few months, the Wheaton students continued to attempt to share the gospel at the park. On one occasion, a Park employee told the students that they could not discuss religion at the park.

This continued until April 5, 2019, when one of the students was approached by park staff while preaching and informed the student of newly enacted rules governing the park and that his evangelism was violating the new rules. Subsequently, the Wheaton students have stopped gathering at the Park altogether.

Ed: Has the city been open to any discussion since the first incident?

Mauck & Baker: In March of 2019, the city sent a letter to the students’ legal counsel admitting park staff’s wrong-doing during the December 7th incident. Subsequent to the notice of the rules change on April 5th, Mauck & Baker sent a letter to the city promising legal action if the rules were not revised to conform to the U.S. Constitution. The city offered no response and has been silent on substantive legal issues or procedural intentions. On August 26, 2019, without notice, it revised the Millennium Park Rules by taking out the permit requirement for exercising free speech but not amending the section that restricts free speech to one corner of the park by using the “rooms” language.

Ed: What are the implications if public parks can isolate speech to certain parts of a public park?

Mauck & Baker: If more parks begin isolating free speech in this manner, it will begin weakening the stronghold of public free speech in traditional public forums. These are areas where the public has historically gathered to freely express itself and there’s no greater example than a public park.

We are not necessarily free to publicly proclaim ideas in office buildings, restaurants, or retail shops. So when we lose our freedom to speak freely in traditional public forums, like a park, no place is safe. And the more popular the traditional public forum, the more important it is to protect its place in society as a beacon of the free expression of ideas.

Millennium Park is the largest attraction in the third largest city in the country with 25 million visitors every year.

If the City of Chicago is allowed to establish these new Rules as a precedent, it will lay the groundwork for labeling other areas of open air outdoor parks as “rooms.” It was an attempt to get around traditional public forums’ strong protection of free speech. Under the label “room,” the city nonchalantly reclassified the park as a limited public forum where free speech is exposed to greater limitations.

Allowing a high-profile city like Chicago to get away with such government overreach will create a new pathway for every other city in this country to follow suit in implementing ever greater limits on free speech in public parks and other traditional public forums.

Ed: A lot of people will be surprised to learn that you can’t share the gospel in some parts of the park. Have there been similar cases like this around the country?

Mauck & Baker: There is a lack of case law on the issue of restricting free speech in public parks and artificially relabeling a traditional public forum into a limited public forum. This is another reason why our case is of the upmost importance; it could set a strong nationwide precedent. We must oppose the city’s tricky use of language set a new trend to free speech.

Ed: Does the religious aspect of the speech give you better grounds here, or would it be the same for any kind of speech?

Mauck & Baker: Free speech is universal and not limited to the religious. It enables everyone to share their ideas, including the anti-religious, environmentalists, musicians, and political activists.

There is a myriad of content ready to be shared and public parks should be a welcoming place for everyone to espouse their ideas. Free speech is also for people who want to hear what their fellow Chicagoans have to say. We all have skin in the game to protect free speech.

Ed: What do you hope to accomplish?

Mauck & Baker: Things going our way will be in the form of a court order preventing the city from enforcing the sections of the Millennium Park Rules that restrict free speech. Subsequently, visitors to the park will enjoy a greater taste of our city’s cultural diversity of ideas.

The people of Chicago have a lot to offer and we want to hear them! Such an order could also set a precedent protecting free speech in traditional public forums across the state and possibly the country.