How we respond in times when we feel powerless may offer a greater opportunity for growth for us and to witness to others.
Ed Stetzer 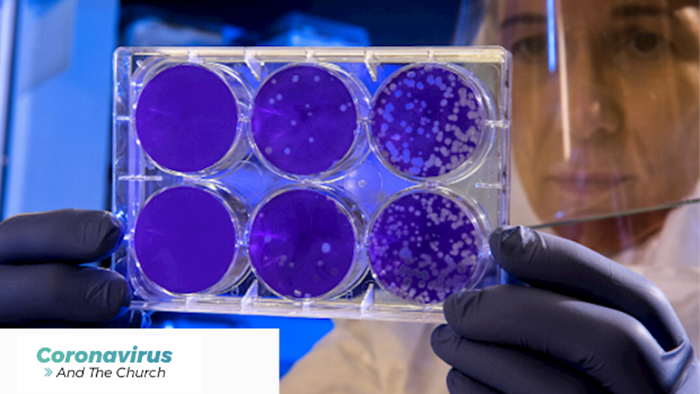 Image: Photo by CDC on Unsplash
You can access all our Cornoavirus-related articles, in addition to parter resources from Saddleback Church’s PEACE Plan and The Humanitarian Disaster Institute at CoronavirusAndTheChurch.Com.

Today’s news cycle is dominated by one thing: the rise and spread of the novel coronavirus.

First reported in Wuhan, China on December 31, 2019, the virus COVID-19 has made an impact on our world, from international travel to the global markets. Coronaviruses are actually common throughout the world and generally “cause mild illness like the common cold.”[1]

However, this new strain has proven to be far more virulent, with 82,000 cases worldwide and 2,800 deaths by late February. As of February 25, 2020, the Center for Disease Control (CDC) reports the virus has spread to 37 locations internationally, including the United States. The CDC said this about the U.S. involvement as of February 25: “Person-to-person spread of COVID-19 also has been seen among close contacts of returned travelers from Wuhan, but at this time, this virus is NOT currently spreading in the community in the United States.”[2]

The World Health Organization (WHO) declared the outbreak a “public health emergency of international concern” on January 30.[3] WHO and the World Tourist Organization (UNWTO) are working together to communicate recommendations regarding travel or trade restrictions. In sports, some have begun to wonder about the future of the Tokyo Olympics this summer.

The WHO also has a site with three main headings: When and How to Use Masks and Advice for Health Workers are two of them.[4] The third is Myth-Busters, because our information-frenzied culture is great at spreading news and terrible at filtering myth from fact.

There is talk of a possible pandemic. There is the expected blame-gaming of politicians, turning a health issue into a political football to be kicked around. Facebook, who canceled its scheduled F8 meeting because of the virus, while Facebook, Twitter, and Google have all moved to control fake coronavirus cures.

I’m no healthcare expert and I don’t play one on TV. But I am a minister of the gospel, and we have a place to go for any and all crises, including a health issue like this. That place is described in the word of God, which reminds us where to put our hope.

For believers, this is a good day to remember that our hope is not in what we save or even in our physical health. Neither the markets nor our current health status provides the source of our identity. Psalm 20:7 reminds us:

"Some trust in chariots and some in horses, but we trust in the name of the LORD our God" (Psalm 20:7).

“Some trust in our financial portfolio and some in our health status, but we trust in the name of the LORD our God.”

This is critical to hold to when fear threatens to grab hold of our hearts: our God is not surprised by a viral outbreak. He is not disinterested in our fears. He is our rock, our light, and our salvation (Psalm 27:1). This might be a good time to look toward our Psalter instead of our news feed for support.

As American Christians we are accustomed to power and security. Suddenly as the possibility for reversal becomes greater, it is how we respond in times when we feel powerless and vulnerable that may offer the opportunity for growth for us and to witness to others we say we long for. Jesus told us to let our light shine in a dark world (Matthew 5:14-16), and our response in a time like this may be such a time to shine.

The history of the church abounds with examples of the church stepping into the darkness of suffering to shine as lights. Maybe that is what we are about to face— we don’t know.

But, let’s look back in history.

Sociologist Rodney Stark explored one such one example where during a plague AD 251 swept through the Roman Empire decimating the population. In his Easter letter around AD 260, Dionysius wrote a tribute to the believers whose heroic efforts cost many of them their lives during the plague.

Pagans tended to flee the cities during plagues, but Christians were more likely to stay and minister to the suffering. According to Dionysius: “Most of our brother Christians showed unbonded love and loyalty, never sparing themselves and thinking only of one another. Needless of danger, they took charge of the sick, attending to their every need and ministering to them in Christ, and with them departed this life serenely happy.”[5]

Dionysius added: “The best of our brothers lost their lives in this manner, a number of presbyters, deacons, and laymen winning high commendation so that death in this form, the result of great piety and strong faith, seems in every way the equal of martyrdom.”[6]

In Christians in the Age of Outrage I offered a more recent example of sacrificially living out the gospel in the midst of suffering. During the Fall of 1793, yellow fever gripped the city of Philadelphia. Historian Richard Newman writes that, “from the moment it began, the yellow fever epidemic was a public-health crisis. Thousands of citizens fled, hospitals became overwhelmed, and dead bodies rotted in homes.”[7]

Within this crisis, it was the emerging black church under the leadership of Richard Allen which entered into the suffering. Some assumed that persons of African descent were immune to Yellow Fever, and the free black community was approached to provide help. Spurned by the church they had served and slandered by others, Allen and his church served the sick when others isolated themselves for fear of catching the disease.

Reflecting on Allen’s response and its legacy, I wrote, “Despite the overt racism he faced, Allen modeled an empathetic approach to loving his neighbors. Allen and his fellow volunteers were heartbroken over the suffering of the sick. They resonated with those patients who had been cast out… Allen never lost sight of the truth: Those around him were lost and needed Jesus. His empathy informed his witness, and it is one reason why the AME grew and his name is remembered today.”[8]

Ironically, those free black people were later lied about for the very work they did during the plague.

Through both examples, we are reminded that the gospel calls us to live sacrificially in the face of crisis. That although fear can threaten to flood our hearts and tempts us to isolate and hoard, Scripture anchors our hope in a God who is greater than the pain we endure in this life. History reveals how more than storms we must weather, there are windows of opportunity to minister in times of calamity. In doing so we testify to the truth that world is not our home, we are citizens of another.

For now, let’s rest in the truth of the Word, that we may be ready if history repeats itself here.

[5] Rodney Stark, The Rise of Christianity: How the Obscure, Marginal Jesus Movement Became a Religious Force in the Western World in a Few Centuries (San Francisco: HarperCollins, 1997), 82.