North Point: We love you too much to open the doors on Sunday morning. Let's focus on doing stuff for the community.
Ed Stetzer 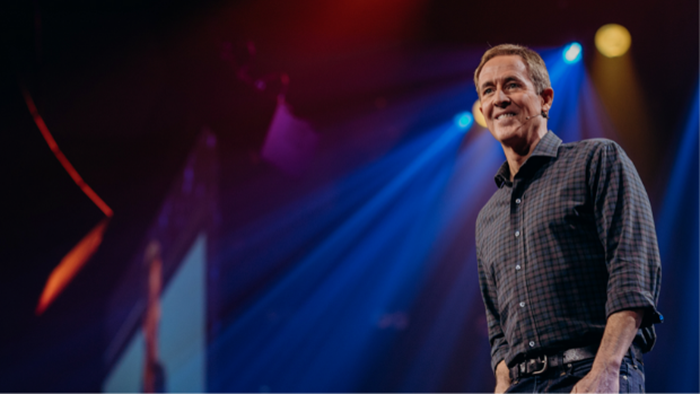 Image: AndyStanley.com
Andy Stanley, founder of North Point Ministries, announced that their churches will not hold in-person church services for the remainder of the year. Their decision made international news and, I imagine, will influence many other churches to take a similar approach. I reached out to Andy and he agreed to do an interview. You can hear that interview on our podcast, the Stetzer Leadership Podcast. Here is a direct link to the podcast on iTunes / Apple Podcasts. Or, we’ve edited this into a two-part written series, and this is part 1. Read part 2 here. Daniel Yang and I co-host the podcast, and we’ve edited our questions for space and the interview for space and clarity.

North Point Ministries announced they would be suspending in-person church services for the remainder of the year. This has made news all around the world.

Ed Stetzer: Andy, tell us about the decision you made and how you got there.

Andy Stanley: First, thanks for having me on, because this is an important moment I think for the local church. As you know, I have pretty strong opinions about a lot of things, but I rarely do interviews. Today, however, I've been doing local interviews in Atlanta and have a CNN interview tomorrow. My assistant said, "You always say no to this stuff." But this is a really important topic. And I feel like I have something important to say, but I'll let you and your listeners be the judge of that.

Everybody listening who is in church leadership or is part of a local church remembers a few weeks before Easter. COVID-19 kicks in and suddenly we're having this conversation as pastors about whether we should meet the next Sunday.

Should we take a Sunday off? I announced to our churches that we would not be meeting publicly for the next three Sundays. Some pastors called and said, "What do you know that we don't?" I said, "I don't know anything you don't. I just know that clarity in the midst of uncertainty is the way forward."

Then, we took Easter off, and after that we announced in late March or the beginning of April that we're not going to meet in person until school starts in August. People thought we were crazy. I said, "No, I want our staff to be hyper focused on creating community online for our entire church." Not just the 15% that would show up if we opened the doors.

This past Tuesday we met again with our lead pastors. We knew we were not going to open August 9th because they punted school opening. It was amazing. It was a pretty short meeting. Everybody decided, "Nope, there is no point in putting another date out there, if not August, maybe September, maybe October, maybe November."

Here is where I think the church needs to think about this: As a local church, we have limited time, limited staff, and limited resources; it makes no sense to focus our staff time and resources on creating a subpar environment on Sunday morning for a nine and 11 o'clock service that only 20% of the people may attend.

We decided to focus on the 100% of all of our church folks and their friends and the rest of the world that may show up later. To use a term I learned from you long ago, this really is my missional decision. It's not based on emotion. It's on point with our mission to inspire people to follow Jesus. It's a very outsider-focused decision instead of an insider-focused decision. As you know, the churches that have opened earlier are seeing 15 to 20, maybe 25% of their previous attendance, and they're spending a lot of money and a lot of energy and they're still having to do online because most people aren't ready to come back to church.

One of the other things that informed our decision is that first in April and May, we surveyed our churches. We also surveyed other churches in the Atlanta area. We wanted to discover what it would take for people to come back. Then two weeks ago, we surveyed again. Here's the interesting thing: about 15% fewer people in the second survey said they were ready to come back. There was less inclination to come back, not more. That helped us make the decision to focus 100% of our time and energy on creating community online. We are going to have some on-campus gatherings, but they're going to be smaller. They're going to be focused. So the church is not closed. We are just reallocating assets to actually impact the maximum number of people during this crazy time.

Ed Stetzer: I think what you're saying is fair that it takes an immense amount of work to try to have on-campus experiences. But at the same time, one of the challenges a lot of people are feeling is that, as you said, 20% would come. What we've also seen is that there's 20% of people who think you're a compromised coward when you don't meet, and 20% of people who think you're horrible for meeting. And there's a lot of people who are just in the middle who are unsure. You're having to navigate multiple constituencies. How have you walked through that?

Andy Stanley: I'm glad you said that. That's why we surveyed our folks, because we wanted to know what they're thinking. So, this isn't me in my prayer closet saying, "God has shown me. Here we go." I do not lead that way. I don't recommend anybody leading that way. There were a lot of conversations: we surveyed our staff and our volunteers. We surveyed our congregation in general, but at the same time, for us this is a safety issue. The way I've said it to the press in the Atlanta area is that we are for our community. We don't want to accidentally do something harmful to our community while gathering a whole lot of people. Under these circumstances, you run the risk of actually doing something negative to the community and gathering the 20% that show up is doing nothing for the community.

Our secular culture is very health conscious. We're not going to ask people to come do something that's unsafe, and in a church as large as ours, we cannot do contact tracing. The government doesn't require this, but it's good stewardship.

We're having a hard time just doing contact tracing with our staff and we've had multiple staff members test positive for COVID-19. I can't imagine taking on the responsibility of doing that when you have children and preschoolers and adults roaming around the building.

The communication has been, we love you too much to open the doors on Sunday morning, let's focus on doing stuff for the community, but at the same time we're doing not just zoom groups. Our middle schoolers meet in driveways. We call them driveway groups. We've encouraged people to come to the campus, bring their chairs, circle up, have your small group in the parking lot and the grass. So the church is not closed. We've just suspended our Sunday morning gatherings.

Daniel Yang: So, the survey went out back in April. What kinds of questions were you asking?

Andy Stanley: There were questions like, would you be willing to return now? There were multiple choice questions: Would you be willing to return in A) one to three months, B) not until there's a vaccine, and so on. When would you be comfortable bringing your children? Do you think you'll be comfortable bringing your children in one to three months, six months, or whatever it might be. It was pretty broad, like measuring their comfort level.

Ed Stetzer: One of the tricky questions though is we don't know if or when there'll be a vaccine. It would take years to develop herd immunity. If it follows typical flu cycle could be two years. If the situation doesn't change, do you continue not gathering in large groups?

Andy Stanley: I don't know. I think most of us are under the assumption that there's going to be some sort of vaccine. I think Emory just released some information that there's been some progress on that. But that's why this is a great opportunity for church leaders to lead because in the midst of uncertainty, the next best thing to certainty is clarity. And we can never be certain. And the more uncertain things are, the more clarity our people need. Uncertainty is never going to go away. We're all dealing with a massive dose of uncertainty. But I know you believe the church is going to survive because Jesus said, "I'm going to build it." We're simply showing up and participating with him.

I don't worry long term about the survival of the church, but if we have to change our approach, church leaders can figure that out. But I can't. I mean, I can't imagine. If there's no more church gatherings, isn't it safe to say there's no more SEC football and in the Southeast that will cause more problems than anything you can begin to imagine. It's not just church gatherings.

Daniel Yang is director of the Send Institute, a church planting think tank at the Wheaton College Billy Graham Center.