Because we all are made in God’s image, we’re called to be our brother’s keeper.
Ed Stetzer and Laurie Nichols 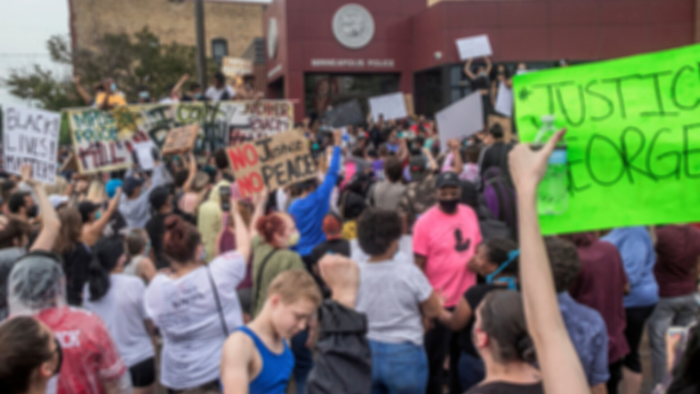 This time, one Minneapolis police officer knelt on the neck of a black man until he could no longer breathe.

The man’s name was George Floyd and his hushed and desperate “I can’t breathe!” reminded many of us of Eric Garner, both in the words and the situation. And, in both cases, their cries did not stop the officers and neither did they stop their deaths.

Onlookers reacted differently than the fired officers, many pleading for the officer to get up. As one Washington Post article explains,

“Witnesses begged the white officer to take his knee off the man’s neck. ‘You’re going to just sit there with your knee on his neck?’ one bystander said on the video….

Another asked, ‘Did you kill him?’”

Based on what they saw, the Minneapolis police department acted swiftly, firing the officers.

How can we not be angry about this?

Indeed, anger is the appropriate response, but not the only response. And, this moment should remind us that cameras tell us what happened, but they also remind us of how many incidents there have been without those cameras.

All of us, if we follow the news on a semi-regular basis, have seen way too many moments like this.

Cameras continue to show us what many African Americans have known for years.

And if one video a day was not enough, a thousand miles away, Amy Cooper (a white woman) was walking her dog off leash in a part of Central Park (NYC) when Christian Cooper, a black man who was bird-watching, asked her to leash her dog in the area—which is designated as leash-only. The situation escalated when Amy Cooper became upset, saying, "I'm taking a picture and calling the cops. I'm going to tell them there's an African American man threatening my life." At the end of the call, she escalated her tone and her faux panic and the camera told us the ugly truth—she was using his race as a weapon.

In the coming days, there will likely be efforts to try to explain this story away. As a church, we must resist these efforts and confront the reality behind this and similar stories. It’s racism on display. And it always brings deep pain.

She was fired and she has apologized—but how many others were not on video? Actually, would she even have considering apologizing if it were not for the video?

We don’t know what she would have done, but we do know what our eyes clearly showed us.

Let our anger remind us to be our brother's keeper.

What both of these have in common is this simple little thing called a camera. Both exchanges were caught on video with a cell phone. Both instances of injustice were captured because another person felt they needed documentation.

In Central Park, Christian Cooper recorded the verbal assault. In Minneapolis, a bystander painfully recorded the horrific act which resulted in the loss of a man’s life.

There is a phrase you likely have heard and it’s a powerful one: “my brother’s keeper.” It harkens us back to the early days of humanity when Cain, after murdering his brother, was confronted by God: “Then the LORD said to Cain, ‘Where is your brother Abel?’ ‘I don't know,’ he replied. ‘Am I my brother's keeper?’" (Gen. 4:9).

This, of course, was a ridiculous reply in the face of an all-knowing God.

As a Christian, there is both a sense of great peace and of great dread in knowing that the God we serve sees all and knows all. There is nowhere, scripture tells us, where God isn’t. C.S. Lewis says it this way: “We may ignore, but we can nowhere evade, the presence of God. The world is crowded with him. He walks everywhere incognito.”

As I reflected on the actions of those Minneapolis officers who took an oath to protect and serve all, I couldn’t help but be grateful for that one courageous woman who took out her camera and hit “record.” She was her brother’s keeper.

The voices of those without power were captured—pleading for this man’s life to be spared. The actions of the officers were captured—as a painful reminder of the injustice too many of our friends of color face.

Depravity and the goodness were captured in that 10-minute video.

When someone asks, “Am I my brother’s keeper?” the answer is always a resounding yes. How this plays out varies. We yell and advocate. We hit record and document. We use our platforms and our voices to speak for our friends who live in fear because of the color of their skin or their ethnicity.

We are all George Floyd’s keeper. And Christian Cooper’s keeper. We are all bound to each other because we are all made in the image of God.

When No One Is Looking

Here’s the thing, and I don’t want you to miss this: because that camera was recording, we can work and pray for justice to be done.

But for every camera recording, too many aren’t.

For every act of injustice caught and shared on social media, too many go under the radar.

My friend and colleague Esau McCaulley tweeted this response:

“African Americans don't need the videos. We have the lived experience of being Black in this country. The videos are not for us. They're for everyone else. Instead, What we are witnessing is the collective triggering of an entire people who have their own stories and traumas.”

Countless more violent actions in the dark continue. This ought to bring all of us to our knees.

But when no one seems to be looking, one Person is: God. Indeed, there is utter dread in knowing that everything we do in secret is seen by a holy God. But there is also comfort and peace that silence won’t stay silent forever, and that every single act is recorded by God.

Even as God sees all, though, we are also called to be our brother’s keeper and take care of each other. This is never truer than for those who are called to leadership positions.

Whether this be a leadership position in a church context or in education or in the medical field or in law enforcement or in any other place, we vow to lead as Jesus leads.

For believers, there is an even higher call: "Do not oppress the widow, the fatherless, the sojourner, or the poor, and let none of you devise evil against another in your heart" (Zech. 7:10).

And what this looks like is antithetical to how the world demonstrates power through a strong hand and a harsh word. Too many leaders take on the adage that only the strong will survive and that there are those who deserve to be treated well, and those who don’t.

I would argue that real power looks remarkably similar to what those bystanders demonstrated. They used their voices for good. They did what they felt they could for the sake of another.

True power, true leadership, is humble and kind. It’s sacrificial and seeks to build up rather than tear down. It’s impartial and responsible and is always on the side of the underdog.

Back to those little cameras. What they demonstrate to me is a powerful tool many of us have never considered. Hear me out: I’m not saying to record everything and everyone around you. That’s actually unlawful in some places and an infringement of privacy.

What I am saying is that all of us have ways and means to be powerful and strong just as Jesus was. We have voices, actions, platforms, and a sound mind to be our brother’s keeper.

Do not be deceived; we need to care for each other today more than ever. So even as I pray for the family of George Floyd and I use my voice to call for justice, I pray for you and for us—that we would use whatever God has given us for the good of those around us who are victims of marginalization and victimization and prejudice on a daily basis.

It’s time to bring what’s silent out of the echo chamber. Let’s commit to be our brother’s keeper, in every situation, regardless of cost—with or without cameras.

Laurie Nichols is Director of Communications for the Wheaton College Billy Graham Center, co-host of the podcast Living in the Land of Oz, and she blogs at Not All Those Who Wander. Laurie is currently working on a book called The Making of a Hero: How you and those around you are changing the world.