Evangelicals disproportionately believed conspiracy theories in 2020. How do we recover?
Ed Stetzer and Andrew MacDonald 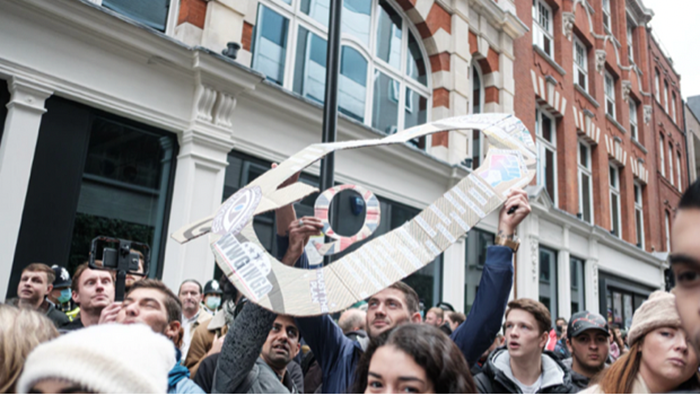 If the QAnon slogan “Where we go one, we go all” is to be believed, it appears that the “all” are fading into history.

In a stunning turn of events, Joe Biden was sworn in as President of the United States. Well, for most people this was not surprising but simply the natural result of the November election. However, for those who bought into the conspiracy theories surrounding QAnon, this was not supposed to happen.

As a result, multiple news platforms are reporting that QAnon is beginning to fracture as many former influential figures are voicing their doubt or outright rejection of the movement. Typical of this broader dissatisfaction, one leader quoted in the BBC noted, "Today's inauguration makes no sense to the Christian patriots and we thought 'the plan' was the way we would take this country back."

While the potential demise of QAnon and other conspiracy theories should be relief to many, considerable work remains in addressing the destruction they’ve caused. Countless numbers were fooled, resulting in untold damage to relationships, institutions, and families. What now remains is significant amounts of anger, distrust, and shame. And, many of these were Christians—evangelical ones at that.

As QAnon and other conspiracy theories begin to lose traction, pastors and church leaders face a decision. We can pretend that conspiracy theories were never really a threat to their congregation and simply move on unchanged. Or we can ridicule the foolishness of those in our congregations who were deceived by conspiracy, driving them out of the church and perhaps into the arms of whatever movement steps into the vacuum of QAnon. Or, we can engage our people refocusing their attention back to the gospel and learn how we need to disciple better.

This last option will be difficult, requiring honest reflection, repentance where needed, and a call to return to Jesus. In this respect, let me suggest two starting points for pastors and church leaders as they enter into this task.

Where did this come from?

Our immediate response must be to love them. As we’ve written before, conspiracy theories proved attractive because of the ways they played to latent fears, loneliness, and purposelessness. Pastors and church leaders need to start by helping their people understand the “why” and how the gospel meets these needs. Only after this first step can we begin to address their actions.

For years a segment of Christianity has sought to reclaim the United States of America as a Christian nation—or at the very least a nation founded upon Judeo-Christian values. However, they have, at the same time, witnessed the American culture (and, yes, what they see as American elites—media giants, big tech, politicians, and Hollywood) adopt a more secular and progressive agenda. This movement made many Christians uncomfortable, and drove many of them into news sources and chat rooms detached from reality. In their discomfort they sought to try and make sense of what they were experiencing, and not always in the best places.

Enter QAnon and the fascination with conspiracy theories.

How Do We Correct Them?

The second thing we must do is correct them. Yes, that’s what churches and their pastors—their shepherds—do. The question is how to do that.

Here it is wise for church leaders to distinguish between those attracted to conspiracy theories from those who aggressively advocated and disseminated them within the community. To the former, church leaders need to warn of the dangers in their actions while offering encouragement and support. Members who subscribed to QAnon and other conspiracy theories need to understand the damage they have caused not only to their local church but the broader Christian witness. Online behavior does not cease to exist simply because we delete our posts.

The more challenging cases are those who have amplified conspiracy theories. In doing so, they served as validation to others in your community. Some of those still won’t listen to reason. To these members, church leaders need to rebuke them and, if necessary, make this a church wide conversation. In the absence of repentance for those who seek to lead others astray, elders and churches may need to walk through a Matthew 18 like process.

While this may seem excessive to some, Christians need to understand how this foolishness not only hurts relationships in the local church and community but diminishes our witness. In such situations, our gospel witness is at stake and we cannot afford to be passive.

Beyond addressing individuals in the congregation, pastors need to reflect on how they can address the challenge of digital discipleship, media consumption, and politicization. Whether through sermons or weekly teaching, pastors have to provide their people with the tools needed to discern truth from lie in a world that often blurs the two.

Our Own Leadership and Ministry

Beyond dealing with those who have been deceived, Christian leaders need to reflect on how these conspiracy theories were able to gain traction in our churches and institutions. What was it about our discipleship that made us vulnerable to lies so appallingly false? What needs, fears, or ambitions did we foster or fail to confront that QAnon was able to seize upon? What habits have we ignored – or potentially even promoted – that opened the door for these voices to have platforms within our church?

Even as we engage conspiracy theorists in our midst, pastors and church leaders need to be asking these questions with the humility to own our part in this problem. Before QAnon had risen to popularity, we warned against the susceptibility of Christians and the need for churches to take active steps in discipling their people towards truth.

We can’t just believe everything we hear the media shouting in our ears; instead, we must think both carefully and critically about what we read at news sites, watch on the news, and hear our peers discussing. We need to consider our sources and, when situations like this arise, be careful to seek out answers from people who actually know what they’re talking about.

It is fair to suggest that Christians have failed in this task. We have not properly modeled or taught godly media habits, helping our people understand how these behaviors are shaping their souls for good or ill. Moreover, we have failed to confront those in our congregations who disseminate falsehoods or slander through social media.

A good place to start in addressing this need is to recognize that pastors must embrace their role as truth-tellers in the church. When Paul exhorts the Ephesian elders to guard against threats to the church, it’s highly unlikely he was thinking of Facebook. Yet this is the challenge of our generation and pastors need to encourage, rebuke, and exhort their people to be careful who they give a platform in their lives. Our attention is one of our most valuable resources. With it we can learn, grow, worship, and love. But we can also be led into foolishness.

As the church looks to sort through the wreckage of QAnon within our pews, we must maintain the tension of empathy and conviction, shepherding and correction. The reality is, the presence of conspiracy theories, peddled by evangelical Christians, have damaged our credibility in a culture that was already inclined to dismiss the gospel.

Part of the evangelical reckoning is to deal with this QAnon problem—and its source.