COVID-19 and Your Church: An Interview with the CDC’s Dr. Jay Butler 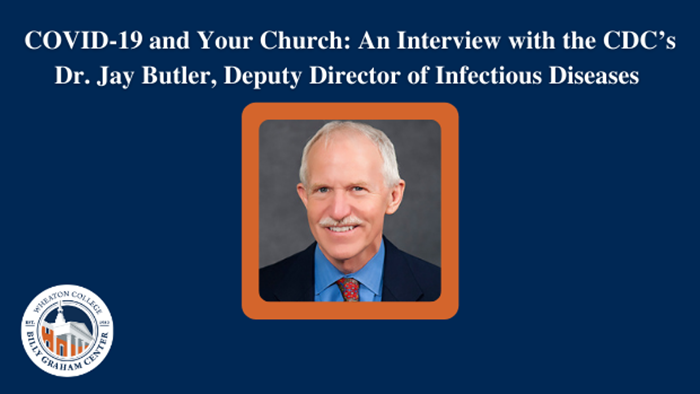 Image: Wheaton College Billy Graham Center
Earlier this afternoon, I had the pleasure of interviewing Dr. Jay Butler, Deputy Director for Infectious Diseases at the Center for Disease Control and Prevention on Facebook Live. In this capacity, Dr. Butler provides leadership to the efforts of CDC’s three infectious disease national centers and helps to advance the agency’s cross-cutting infectious disease priorities. Below, you will find part one of three articles offering abridged versions of our conversation. The interview here is shortened and edited for clarity and brevity. Watch our interview with first guest in this ongoing series, Dr. Francis Collins, or read it here. Read part two here.

Dr. Ed Stetzer: Where are we—or do we even know—in the midst of this pandemic?

Dr. Jay Butler: What we can describe is where we’ve been and how that might reflect what’s going to happen next. Right now, we are at a stage where we’ve come down from the worst of the pandemic that occurred in early January. But, we’re also at a critical inflection point because we’re at a time now where the number of cases has stopped declining.

Over the past couple of weeks, it’s really been a flat line. We are still seeing anywhere from 50,000 to 60,000 new cases every day. Sadly, roughly one thousand additional deaths are reported each day. These are numbers similar to what we saw at the peak of the so-called second wave last summer. So we’re at a point where it is way too early to say whether or not this is over yet.

A lot of what happens next depends on us, and how we respond to what we continue to learn about this virus.

Ed: When we talked to Dr. Francis Collins, one of the things someone commented to me afterwards was that “it sounded like Dr. Collins was thinking that none of us are meeting.”

A lot of it depends on where you are. Places like New York, Chicago, and Washington D.C. are much more restrictive, but churches around the country are meeting, and we find a larger and larger percentage of people returning. So, give us some CDC guidance regarding church gatherings. We know the CDC has not made mandates, but what guidance would you give for church and church leaders?

First of all, let’s talk about what we know about how the virus is transmitted, the specific recommendations that we have regarding any kind of gathering of people, and then how that applies specifically to worship services.

Starting with how the virus spreads; its spreads like influenza. In some sense, it’s spread through respiratory droplets. This means that when we cough or sneeze, or when we talk or sing, we’re projecting droplets into the air, and if we’re infected those droplets can contain the virus. The large droplets tend to only go through the air about six feet or so, so gravity pulls them down to the floor and the risk of infection becomes lower the further people are apart.

However, some small droplets can stay airborne for a longer period of time. So it’s also important to think about ventilation and this is where masks play a role also. This has been one of the things we’ve changed our recommendation on. As we have learned more about how this virus behaves, the importance of masks really cannot be underestimated.

The other thing that’s really important about understanding COVID-19 and how it is transmitted is that the rate of infection among people who have no symptoms at all is very significant. We estimate anywhere from 20 to 40% of people who are infected manifest no symptoms at all.

One of the hardest lessons that we’ve learned from this disease is that the peak infectivity for people who become sick is at the time of symptom onset. This is different than other coronavirus diseases like SARS or Middle East Respiratory Syndrome, where the peak infectivity is actually at the peak of disease severity. So, we have the problem of people who never develop symptoms, as well as the problem of people who are infectious before they develop symptoms.

We certainly want to stress that if you’re sick, you should not be going out in public, and certainly not to worship services. But, it’s important to recognize that we estimate that more than half of all transmissions in the community occur from people who have no symptoms at all.

Second, let’s talk about what that means, in terms of our current understanding, of the best way to prevent transmission. It gets down to the issues I already mentioned in passing, about being able to maximize the distance between people to a minimum of six feet.

We do have some additional date that we’ve recently put out that suggest in a school setting, particularly among younger children, three feet may be enough, but in general, the further people can be apart, the better.

The role of masks is crucial. We’ve seen that in multiple situations. Now, I think the evidence for the role of masks in preventing spread from people who have no symptoms and also protecting the wearer is beyond serious question.

And there are other issues such as hand hygiene. We feel that the virus can contaminate hands and so shared objects are important as well.

But I really can’t underestimate the importance of distancing between people and being in ventilated areas and wearing masks.

Part 2 will run next week, or you can watch the entire conversation here, including questions about vaccines and the future.

COVID-19 and Your Church: An Interview with the CDC’s Dr. Jay Butler

COVID-19 and Your Church: An Interview with the ...