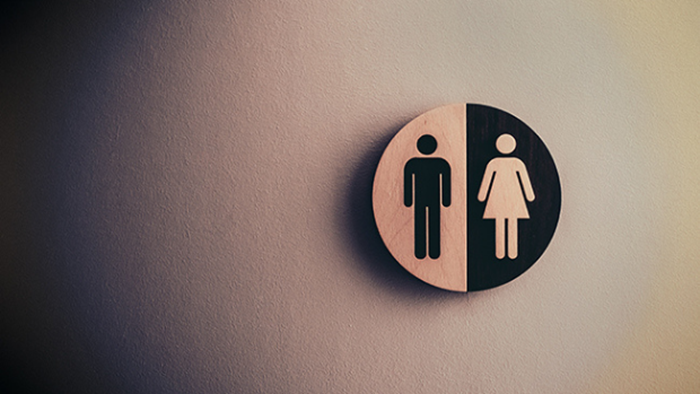 As legislatures in Washington, D.C. and across the country discuss issues surrounding individuals who identify as a gender different from their biological sex, a clear majority of U.S. Protestant pastors see such gender fluidity as morally wrong.

In a study from Nashville-based Lifeway Research, around 3 in 4 Protestant pastors say identifying as a gender different from one’s biological birth gender is morally wrong. Similar numbers say the same about attempts to physically change genders.

Among U.S. Protestant pastors, Lifeway Research found 72% say it is morally wrong for an individual to identify with a gender different from the biological sex they were born, including 62% who strongly agree. Around 1 in 7 (14%) disagree, and another 10% do not believe it is a moral issue.

In an earlier study Lifeway Research asked the same questions of Americans. Forty-four percent of Protestant Americans and 35% of all Americans agreed it is morally wrong for someone to identify with a gender different from the sex they were born. In the 2020 State of Theology study from Lifeway Research, however, 79% of American adults agree God created male and female.

“Protestant pastors are more likely than Americans who identify as Protestant to consider it wrong to identify as a gender different from your biological sex,” said McConnell. “While most Americans accept the biblical narrative of God designing male and female, pastors take changing that design much more seriously.”

Evangelical pastors are more than twice as likely as mainline Protestant pastors to agree identifying with a different gender is immoral (84% to 32%).

Denominationally, Pentecostals (90%) and Baptists (89%) are more likely to agree than pastors in the Restoration movement (69%), Lutherans (60%), Presbyterian/Reformed pastors (45%) and Methodists (43%). 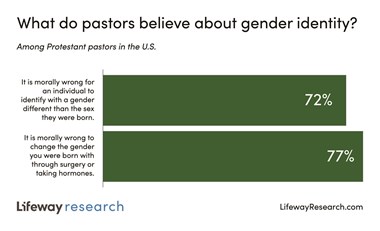 Protestant pastors in the Northeast are the most likely to say this is not a moral issue (17%).

More than 3 in 4 pastors (77%) say it is morally wrong to change the gender you were born with through surgery or taking hormones, with 71% strongly agreeing. Fewer than 1 in 8 disagree (12%), and 7% say it’s not a moral issue, according to the Lifeway Research study.

“Whether it is a physical sex-change or public identification, a large majority of pastors see a person’s biological sex as something a human should not change,” said McConnell.

Denominational groups also have a similar breakdown as the previous question. Pentecostals (96%) and Baptists (94%) are more likely to view attempts to change gender as immoral than Restorationist movement pastors (75%), Lutherans (69%), Presbyterian/Reformed pastors (49%) and Methodists (48%).

The latest estimation from Gallup finds 0.6% of the U.S. adult population identifies as transgender. Only among the youngest generations does the amount top 1%—1.2% of millennials and 1.8% of Generation Z.

Still, according to the Lifeway Research study, close to half of pastors (48%) say they know someone who is transgender. Slightly fewer (41%) say they don’t know any individuals who identify as transgender, while 11% say not that they know of.

In 2015, Lifeway Research found 27% of Americans personally knew someone who identifies as transgender.

Pastors who are of other ethnicities (57%) are more likely than African American pastors (36%) to say they personally know someone who identifies as transgender. White pastors are in between at 48%.

Additionally, pastors with graduate degrees and pastors of churches with more than 250 people are more likely to say they know someone who identifies as transgender.

“Despite close to half of pastors saying they personally know someone who identifies as transgender, most still view identifying as a different gender as immoral,” said McConnell. “As lawmakers debate establishing protections for those who identify as a different gender from their biological sex at birth, it waits to be seen if Congress will seek to force pastors and their churches to implement changes contradictory to their religious convictions.”

For more information, view the complete report or visit LifewayResearch.com.

Each survey was completed by the senior or sole pastor or a minister at the church. Responses were weighted by region and church size to more accurately reflect the population. The completed sample is 1,007 surveys (502 by phone, 505 online). The sample provides 95% confidence that the sampling error does not exceed plus or minus 3.4% This margin of error accounts for the effect of weighting. Margins of error are higher in sub-groups.