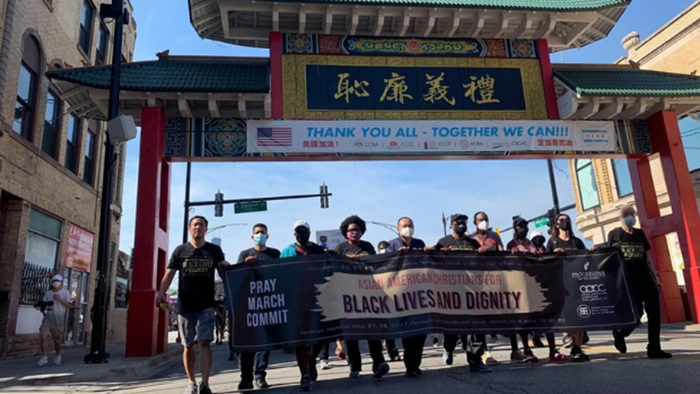 Marching beneath the Chinatown Gate.

In light of the Atlanta shooting of six Asian women on March 16, 2021 and the subsequent outrage and rallies over racist attacks against Asian Americans, are Asian Americans now ready to fully engage in public demonstrations against social injustices?

One significant event already occurred on June 28, 2020, as well over 1,000 Asian American Christians in Chicagoland gathered for a demonstration in support of black dignity and pride which was initiated by the Asian American Christian Collaborative. The killing of George Floyd, coupled with the recent deaths of other African Americans, had galvanized the Asian American community to participate in a two-mile march against the violence perpetrated on the black community. The march began on the outskirts of Chinatown, stopped for prayer vigils at several points including the historic century old Chinese Christian Union Church, and eventually ended at a historic century old African American church (Progressive Baptist Church). 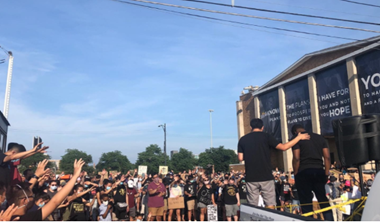 A study was recently conducted to determine whether the Chicago march was an indication that the younger generation of the “model minority” was now engaging in political activism, or whether it was an aberration. These results were presented on March 5 at the World Christianity Virtual Conference at Princeton Theological Seminary.

This study surveyed Asian American believers in Chicagoland, both those who participated in this march and those who did not, with the intention of answering several pivotal questions:

What were the primary reasons why these demonstrators joined the Chicago march?

Out of a list of seven reasons, the two overwhelming choices were Wanted to demonstrate against the racism experienced by the Black community (88%) and Wanted to march as an expression of my spiritual faith (85%). In fact, 76% chose both these primary reasons.

Was age an important factor in determining how one answered?

These results were further broken down by age groupings. As a number of recent Asian American church plants are essentially mono-generational at their inception, consisting primarily of those in their early post-college years, the first age bracket mimics this trend by incorporating those from 16-34 years of age (Only four respondents were under the age of 21.). The second bracket consists of more seasoned adults from ages 35-49. The final cluster of mature adults follows the AARP designation of those 50 years of age and above as seniors.

There were no wildly dramatic differences in the results from which one can draw definitive conclusions based on age. For example, to the question of why these marchers chose to take part, the responses were highly similar across the age segments as seen in the next two graphs. 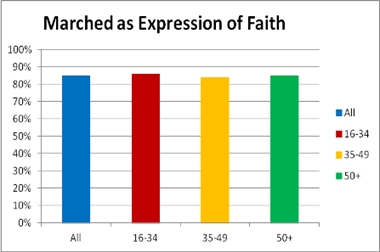 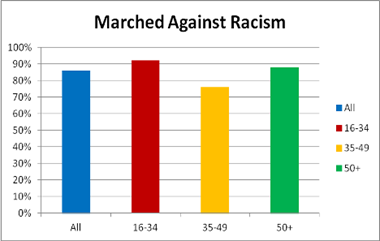 What were the primary reasons why others did not join?

Those in the Asian American community who did not march were also surveyed to determine why they chose not to participate. Concern for one’s personal safety, whether due to contracting COVID-19, potential confrontations with others during the march, or the possibility of degenerating into a riot, was the number one concern with more than half checking that box at 58%. The second most chosen reason at 49% was that the march was not convenient to attend. The remaining six options returned single digit responses.

What is the level of interest in social justice in the Asian American community?

One way to gauge this is by examining what people have done since the march. Both marchers and non-marchers were asked whether they had engaged in the following four activities after the June 28 march. 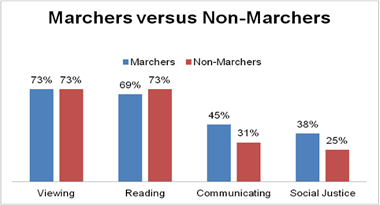 Communicating with others in some form, written or verbal, was higher for the marchers, 45% to 31%, as was participating in other Social Justice activities, 38% to 25%.

Reading and Viewing are often solitary activities stoking the mind and imagination. Communicating with others and Participating in other social justice activities require action and interaction. More than half of the respondents who marched did not interact with others in these latter two categories, even fewer among the non-marchers. It should be noted, however, that the pandemic created conditions that made in-person interaction with others less accessible. 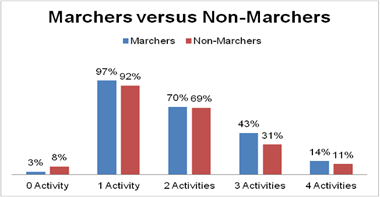 Of the four follow-up activities, how engaged were respondents? With how many were they involved?

This graph reveals much similarity between these two groups. The marchers were slightly more engaged in multiple endeavors.

Did age make a difference?

Were young adults more inclined to do more as might be theorized considering the interest of millennials regarding social justice matters? 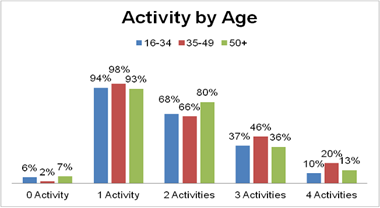 Here is what the data shows: There are similarities that cut across all age ranges. The young adults in blue did not lead by percentage participation in any of the groupings. However, in terms of raw numbers, there were more young adults engaged and participating than in any other age group. The median age of the marchers was 34. So interest is clearly there if 50% of all the marchers fall into this one age bracket.

Did the immigrant congregation in your church support participation in this march? 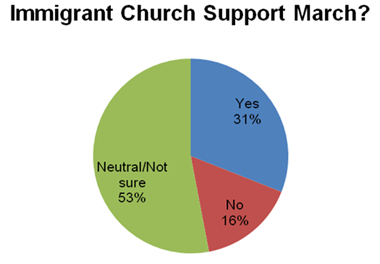 Seventy-eight percent of the respondents worship at immigrant heritage churches. Only 31% said Yes, 16% replied No, and 53% answered Neutral/Not sure. These results are not ringing endorsements for the march from the churches where their members did take part in this highly visible public activity.

In your opinion, do you think Asian American Christians are willing to prioritize participation in social justice activities?

As the responses from both marchers and non-marchers were similar, they were combined. 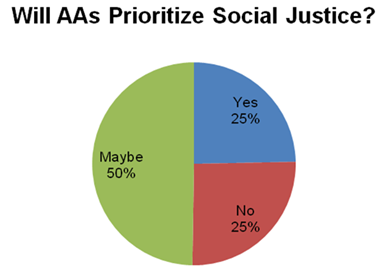 Twenty-five percent answered affirmatively. Another 25%, answered negatively. Half said Maybe. Half were uncertain about the position of their peers.

Returning to the central question, “Are Asian American evangelicals now ready to engage in political activism based on their participation in the June 28 march as well as their subsequent activities,” the results of this survey indicate uncertainty as well as potential.

The overwhelming numbers who engaged in either extended reading or viewing about social justice matters in the subsequent months indicate interest, as well as growing knowledge and awareness about political activism.

However, as noted above, fewer than half felt supported by family, church or community. Public presentations and open conversations about social justice topics are still limited and controversial in a number of Asian American evangelical churches. This would be consistent with the reigning “model minority” script of ascending the socio-economic ladder through achievement and diligence rather than through political activism.

The large number of maybes, uncertain which direction their peers would take in prioritizing social justice activities, indicates a potential that could be tapped with effective leadership. The hastily assembled, yet highly attended June march is proof of the desire to speak out against racial inequality. The Asian American Christian Collaborative (AACC) and its partners provided leadership and direction resulting in a highly successful march.

A wildcard factor that has emerged is the attacks against Asians which have escalated exponentially during the pandemic. The Atlanta murders have drawn national attention to the plight of the usually silent “model minority.” Synchronized protests coordinated by the AACC to “Stand for AAPI Lives” are scheduled for March 28 in Atlanta, Austin, Chicago, Detroit, Houston, Los Angeles, Maryland, New York City, San Francisco, Seattle and Washington DC. Will this tragedy be the catalyst that galvanizes the Asian American community to emerge as a voice against social justice inequities? Will this concern extend to standing up for other minorities as the Chicago march did or will it remain insular, primarily concerned over its own interests?

Rev. Andrew Lee was born in Hong Kong but came to the United States on a boat when he was 3 years old. He has been married to Penny for 40 years and they have three adult children and three grandchildren. He recently retired as senior pastor of the Chinese Christian Union Church in Chicago, the largest Chinese church in the Midwest. He has taken on a new role as associate director of the Global Diaspora Institute at the Wheaton College Billy Graham Center. Dr. Lee has a PhD in Religion from Baylor University.