The Shalom of Neurochemistry

Prior to becoming a counselor in a program that treats domestic violence offenders, I hadn’t thought much about oxytocin, the hormone often referred to as “the trust molecule.” It is a neurochemical often associated with the reproductive cycle, and its synthetic form, pitocin, is used to induce labor. Flooding the brain during sex, childbirth, and breastfeeding, it creates a sense of calm and security, promoting bonds in the family unit. Oxytocin is produced in the hypothalamus, and it’s then released by the pituitary gland when we experience touch or intimacy. Most of us experience its impact throughout the day, triggered by a variety of human experiences.

Reflecting on the role of this hormone, I notice the calming effect when my daughter leans against me in the checkout line, and the ataractic sensation as my wife rubs my back when I’m anxious. Oxytocin also works in subtler ways: it can be released through an enjoyable conversation with a stranger at the post office. Oxytocin is at work when I meet with other men at my church, experiencing the tranquility of community.

Oxytocin reminds us what we were created for: connection. This hormone delivers a reward, like we experience from sex or food, just for being connected to others. The benefits of oxytocin are not limited to mood; it aids digestion, regulates heart rate, reduces drug cravings, improves social skills, and has been shown to increase generosity. Scientists have even demonstrated that it encourages monogamy; one study showed that under the influence of oxytocin, committed men were more likely to keep their distance from attractive women. We are meant to pursue monogamy, tenderly care for our children, enjoy close friendships, and maintain peace with acquaintances in our community. Oxytocin reminds us, on a chemical level, of who God is, his Trinitarian nature that is in constant communion with himself. It’s like shalom packed into a hormone.

My appreciation for this hormone has grown throughout my time as a counselor for domestic violence offenders. Each week, I get a picture of life with meager amounts of human connection—what it would be like to have significantly less drive to connect with others. And brain chemistry may play one part in this pattern.

Imagine if your oxytocin receptors never had much chance for development, due to childhood trauma or lack of touch and nurturing. Although oxytocin often follows high levels of stress in order to regulate our mood, those who undergo constant stress experience a diminished ability to create and release oxytocin. And without new experiences of secure relationships, the brain's ability to produce and release oxytocin will stagnate.

Oxytocin is only one of many neurochemical rewards we receive. For example, serotonin is released when we feel significant and important. Dopamine is associated with achievements and completing tasks. Adrenaline is released when we take risks, try something new, or explore.

However, if one of these hormones moves to the back burner, a person will rely more heavily on the others. With reduced oxytocin levels it only makes sense to pay attention to those drives that will actually pay off. We replace the highs of connection in various ways: the adrenaline high of an argument, the feeling of power in a domestic violence incident, the dopamine released through alcohol consumption. Choosing career over family relationships, we may attempt to fill the gaps of oxytocin’s absence with behaviors that release serotonin and dopamine, which accompany feelings of competence and accomplishment.

As I’ve listened to the men in my groups, I’ve slowly realized that many do not receive the same fulfillment I do from everyday interactions: a tête-à-tête with a close friend, rocking my newborn son to sleep, cuddling with my wife. For them, reading books to a child feels similar to putting away the dishes. Social gatherings are only as fun as the dopamine-releasing substances that are present. Sex is only as fulfilling as it is exciting and new, and the familiarity of a monogamous sexual relationship quickly turns lackluster.

However, we know that our brains can change. Just in the past twenty years, scientists have been shocked and amazed to discover the plasticity of our brains. We once thought our brains were concreted by early adulthood; now we know that new experiences change the way our brains interact with the world, including the chemicals they release. Though it’s often difficult, we can hack through the jungles of gray matter and create new neuropathways. Even during the 14 weeks my groups run, there can be some spark of change.

Sitting in our musty office on the rough side of town, directly off the main bus route, I hear the bravest disclosures: men discuss their relationships, their families of origin, how they feel about their jobs, and, of course, their kids. It might not seem incredibly transparent to the average, untrained ear. But for a person to utter one single vulnerable word in a world that has never been safe takes incredible courage. And it is those moments that create an atmosphere of connection. Men begin to smile, even at each other, shake hands, and pat each other on the back. They admit they don’t have such personal conversations with their coworkers or romantic partners—not even family members.

My role is often exhausting, as each week I face misogyny that runs as deep as any worldview. But I also experience the beauty of seeing men begin to trust one another and build connection—of seeing their oxytocin “muscles” exercised and strengthened.

And slowly, as they connect, they are experiencing how God created us to live—shalom, in a very human, physiological way. They find peace and calm, even in the midst of a court-ordered ramshackle community. Some refer to this time as the only refuge of the week. In fact, by thinking positively about coming back to group, their brains are able to again release more of this trust hormone. As their brains practice week to week, they increase in ability to experience shalom on a neurobiological level. And it is telling them that this is how they were meant to live; that this is how things were created to be.

Krispin Mayfield is a counselor living in Minneapolis. 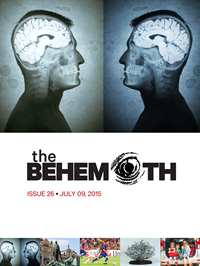