‘I Cannot Give Myself to Painting’

"For a long time I used to say, in all my elementary books, that, except in a graceful and minor way, women could not paint or draw,” the renowned Victorian art critic John Ruskin said in 1883. “I am beginning lately to bow myself to the much more delightful conviction that no one else can.”

The change began, he explained:

When I was at Venice in 1876—it is about the only thing that makes me now content in having gone there—two English ladies, mother and daughter, were staying at the same hotel, the Europa. One day the mother sent me a pretty little note asking if I would look at the young lady’s drawings.

On my somewhat sulky permission, a few were sent, in which I saw there was extremely right-minded and careful work, almost totally without knowledge. I sent back a request that the young lady might be allowed to come out sketching with me. … She seemed to learn everything the instant she was shown it—and ever so much more than she was taught.

The drawings of the 23-year-old Lilias Trotter, he said, make you feel “that they are exactly what we should all like to be able to do.”

Ruskin quickly became a close friend and mentor; Trotter was, to him, a kindred spirit and astute pupil. Throughout Trotter’s early twenties, while her friendship with Ruskin blossomed and influenced her artistic pursuits, she was also being influenced in other arenas.

English evangelical movements and the preaching of D. L. Moody stirred Trotter, her eyes “opened to see the loveliness of the Son of God and His right to control her redeemed life.” She was raised by an Anglican mother. And at age 12, she had clung to God in prayer through the trial of her father’s early death. But in her twenties, she became increasingly convinced that her life was not her own, that she belonged to God.

Trotter busied herself on the streets of London. She helped to rent a nightclub to turn it into a refuge for working girls. She volunteered extensively with the YWCA, taught, and canvassed the streets alone at night in pursuit of prostitutes to aid and pray with.

Ruskin, watching Trotter’s interests expand from art to city ministries over three years, did not understand her drive to serve these women.

“Am I not bad enough?” he complained. “Am I not good enough? Am I not whatever it is enough, to be looked after a little when I am ill, as well as those blessed Magdalenes?”

Ruskin decided to challenge her to make a choice. If she would devote herself entirely to her art, he would help her become “the greatest living painter and do things that would be Immortal.”

Trotter faced a decisive moment: whether to leap headlong into the opportunity to pursue a vocation that would likely provide lifelong success—but at the expense of ministry opportunity. Trotter’s agony and indecision over Ruskin’s offer was evident in a letter she wrote to a friend: “Since then an almost constant state of suffocation half intoxication so that I can hardly eat or sleep except by trusting the Lord about it.”

Before too long, Trotter settled the matter in her own mind.

“I see as clear as daylight now,” she wrote. “I cannot give myself to painting in the way he means and continue still to ‘seek first the Kingdom of God and His Righteousness.’”

Once decided, Trotter returned to her London work. But when she prayed, she heard the words “North Africa” sounding in her heart. At a meeting on foreign missions, after a missionary described the needs among Algeria’s Muslims, Trotter stood and declared, “God is calling me.” She applied to the North African Mission.

And they turned her down.

Her heart was too weak, they explained. So she and two friends went on their own.

“Three of us stood there, looking at our battle-field,” Trotter wrote. “None of us fit to pass a doctor for any society, not knowing a soul in the place, or a sentence of Arabic or a clue for beginning work on untouched ground; we only knew we had to come. Truly if God needed weakness, he had it!"

Though she was doubtful of her own ability, Trotter’s work in Algeria would be remembered as groundbreaking. “Her missiological insights were futuristic in the sense that all true leaders are visionaries,” David Lundy, former international director of Arab World Ministries, says today.

Trotter immersed herself in the culture before she understood the language. She contextualized her brochures and pamphlets, bringing all the power of her art and pen to stories and scenes of North Africa in an effort to better convey the gospel message. Her artistic talent did not go to waste on the mission field, but flourished as she used it for the advancement of her ministry—and lived in a setting where she could observe and depict scenes she could have never witnessed otherwise. Missiologist Don Little, director of the Lilias Trotter Center, calls her work a model for “how to be creatively engaged in a similar way with Muslims.”

She traveled into the desert for weeks at a time—finding joy in “being allowed to go with his message” and rejoicing when “that light reaches a new spot on this earth that God loves.” On one such trip, her journal entries recorded the welcome they received. After talking for hours with a group of over 40 people, someone remarked, “Come and stay always with us and we will come and hear every day, and we will give you a house and garden, or perhaps two!”

Trotter’s journals and diaries reveal a woman who saw, painted, and wrote about creation as God’s textbook. From the calyx “hands” of the buttercup, for instance, Trotter derived a lesson on forfeiting control. “Have we learned the buttercup’s lesson yet? Are our hands off the very blossom of our life? Are all things—even the treasures he has sanctified—held loosely, ready to be parted with, without a struggle, when he asks for them?”

Though bedridden in her last years, she continued to write and paint. When she died in 1928 in North Africa, she had seen many people convert to Christianity—especially women. But she lamented that her prayer for the planting of a local church remained unanswered.

“I am full of hope that when God delays in fulfilling our little thoughts,” she wrote, “it is to have himself room to work out his great ones.”

Katherine Halberstadt Anderson is a journalist and the communications director for the Humanitarian Disaster Institute. Andie Roeder Moody is assistant editor of The Behemoth. A documentary about Trotter, Many Beautiful Things, will be released in February 2016. 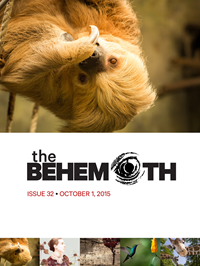