The Perils of Independency

November 12, 1956
This article is from the November 12 1956 issue. Subscribers can read all of CT's digital archives.

The contemporary American church scene discloses significant spiritual trends. Tendencies originating obscurely in the past have now assumed forms quite obvious to the students of religious life.

American Christianity is dynamic, not static. It exists in a shifting historical situation, not in a vacuum. The visible church cannot fully escape this fact of historical change as the climate of the day. From day to day, reactions to it may appear quite imperceptible; in the span of a generation they will become quite apparent, and may even be cataclysmic.

The Protestant Reformation in the sixteenth centurn represented a break with both the doctrines and the hierarchy of Romanism. Justification by faith alone was not the only cardinal theological tenet of the Reformers. Intrinsic in the movement of reform was a desire to break with the suzerainty of Rome. Against the papal claim of ultimate authority in the Church and thus in the pope of Rome, the Reformers re-elevated to authority the written Word of God as the sole regulator and restrainer of conscience.

Protestant churches became independent and autonomous bodies, although often within the framework of national states. Yet in many instances independency, or existence outside these bodies, was not tolerated. The nonconformists in England were viciously persecuted. In Lutheran countries, Baptists and others eked out an uncomfortable survival. Even in early America, often pictured as the land of religious freedom, the same situation prevailed. In New England, for example, dissenters from the Puritan hope were exposed to the wrath of persecutors. Roger Williams, Henry Dunster and Ann Hutchinson shared in it personally.

More recently, certain trends in the United States have brought ...

The Perils of Independency

The Perils of Independency
expand
hide this 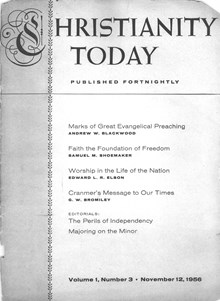 This article is from the November 12, 1956 print issue. Subscribe to continue reading.