Dare We Renew the Controversy?

Part 3: The Contemporary Restoration
Carl F. H. HenryJuly 8, 1957
This article is from the July 8 1957 issue. Subscribers can read all of CT's digital archives.

Fundamentalism, despite its problems of temperament, is a theology reflective of biblical supernaturalism in the conflict against the unbelief of modernism. Therefore we particularly need to understand fundamentalism in its theological formulations. In so doing, we may clarify our personal responsibility, to divorce biblical supernaturalism from its stigma of temperament, and to know it for what it reflects in truth: the unchanging realities of special divine revelation.

Most recent literature dismisses fundamentalism in terms of temperament and ignorance. Little significance is given to the movement as biblical supernaturalism in continuing conflict with theological unbelief. A few exceptions sensed that the role of Christian doctrine was the basic issue at stake, and seem almost monumental on this account. Theodore G. Soares, for example, in Three Typical Beliefs (Chicago: The University of Chicago Press, 1937), states the issue unabashed: “Fundamentalism is as old as the Reformation, though the name is of recent origin. The differences that have separated the Protestant sects have been peripheral; the great doctrines of the orthodoxy have been central, held by all. About half a century ago the inroads of liberalism caused the conservative elements in all the denominations to draw together.… Asserting that there could be no compromise on the unchanging fundamentals of the Christian faith, they adopted as a rallying cry the name of ‘fundamentalist.’ They claimed that they were reaffirming the faith as Luther held it, and Calvin, and Knox … and Wesley, and the great missionaries and evangelists, and most of the theologians until very recent times. And in that claim they were undoubtedly correct. ...

Dare We Renew the Controversy?

Dare We Renew the Controversy?
expand
hide this 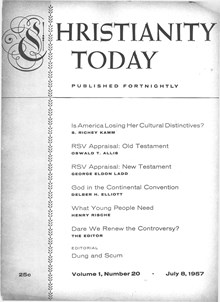 This article is from the July 8, 1957 print issue. Subscribe to continue reading.